Health Minister Datuk Seri Dr Adham Baba speaks during a press conference in Putrajaya March 17, 2020. — Picture by Shafwan Zaidon
Follow us on Instagram, subscribe to our Telegram channel and browser alerts for the latest news you need to know.
By KENNETH TEE

Health Minister Datuk Seri Dr Adham Baba said the first death reported was a 60-year-old man who has a history of chronic diseases such as diabetes and hypertension.

“The man started experiencing fever, cough and breathing difficulties on March 7 before seeking medical treatment at the Sarawak General Hospital on March 14 after being tested positive for Covid-19.

“His condition deteriorated and was admitted to the Intensive Care Unit (ICU). He was pronounced dead today,” he said during a press conference here at the ministry.

As for the second death, Dr Adham said the deceased was a 34-year-old man who had attended a tabligh gathering at Kuala Lumpur’s Jamek Sri Petaling Mosque, which ran from February 27 to March 1.

“The deceased began experiencing fever on March 5 and sought treatment at Hospital Permai, Johor on March 12,” he said, adding that the man’s condition worsened and he was admitted to the ICU before passing away today.

Over 15,000 people are estimated to have attended the tabligh gathering.

Sarawak’s State Disaster Management Committee earlier confirmed the 60-year-old man, a pastor Emmanuel Baptist Church in Kuching, had passed away at 11am at Sarawak General Hospital.

It also said the State Health Department was still in the process of identifying the source of his infection.

The ministry had recorded a total of 120 new cases today, bringing up the total number of positive cases in Malaysia to 673.

Dr Adham also reminded every Malaysian to become a responsible individual and play their respective roles in assisting the government in the fight against Covid-19. Travellers are pictured at the Kuala Lumpur International Airport in Sepang March 17, 2020. — Picture by Shafwan Zaidon

He then listed several guidelines that should be followed during the movement control order set to take effect beginning tomorrow which was announced by the prime minister yesterday.

“Practise optimum cleanliness at all times by washing your hands using soap or hand sanitiser.

“Always practise good cough etiquette by covering your mouth and nose with a tissue when you sneeze or cough before washing your hands immediately after.

“Lastly, seek medical treatment immediately if you experience difficulties in breathing, fever, cough and flu,” he said, adding that any updates will be announced by the ministry from time to time. 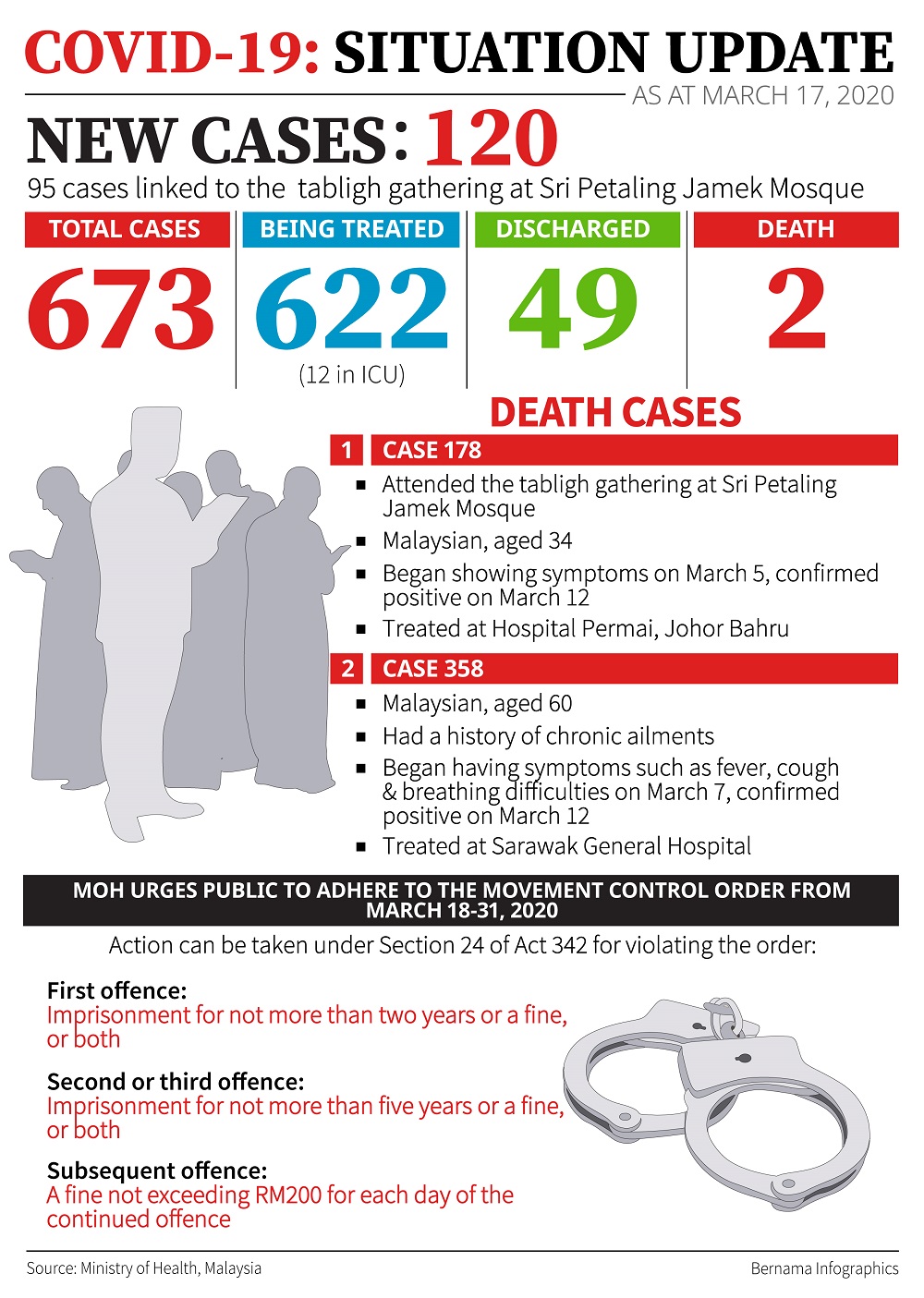