Mohd Khairul Azam Abdul Aziz speaks to reporters at the Kuala Lumpur High Court December 17, 2019. — Picture by Miera Zulyana
Follow us on Instagram, subscribe to our Telegram channel and browser alerts for the latest news you need to know.
By KENNETH TEE

KUALA LUMPUR, Dec 17 — Lawyer Mohd Khairul Azam Abdul Aziz has again filed a lawsuit to seek declarations from the High Court that Section 28 and Section 17 of the Education Act are inconsistent with Article 152 of the Federal Constitution.

His first attempt to do so failed; the Federal Court ruled last month that such challenges to the existence of vernacular schools must first be made in the High Court.

Represented by fellow lawyer Datuk Shaharudin Ali today, Mohd Khairul said the lawsuit filed this morning was a continuation of his summons filed on October 23 in the Federal Court as the court did not dismiss his case on its merits but noted the proper forum should be at the High Court.

“Based on that reason alone, we re-filed our suit in the High Court so that issues pertaining to vernacular school would be able to be determined by the High Court, once and for all,” Mohd Khairul said.

He also denied that his lawsuit was intended to stir up racial issues.

“This action is purely legal that is based on the Constitution and the law. We never questioned or restricted the rights of those who want to learn their mother tongue as a subject.

“The issue brought to this court is on the main medium of instruction in government institutions as the law stipulates compulsory usage of Bahasa Melayu,” he added.

Shaharudin also rejected claims that the Federal Court made a decision on the constitutionality of vernacular schools’ existence.

“In other words, yes, it is a continuation. It only said we knocked on the wrong door. So we have filed the same on a slightly different cause of action,” he said, adding that they were challenging the validity of both Sections as they believed its inconsistency with Article 152 of the Federal Constitution.

In his originating summons sighted today, Mohd Khairul claimed both Section 28 and Section 17 of the Education Act are inconsistent with Act 152 of the Federal Constitution, and thus, both Sections are considered null and void.

Under the Education Act, Section 17 states that the national language shall be the main medium of instruction in all educational institutions in the National Education System, except for national-type schools created under Section 28 or others given exemption by the education minister.

Also, under Section 17, educational institutions that do not use the national language as the main medium of instruction have to teach it as a compulsory subject.

Section 28 enables the education minister to establish both national schools and national-type schools. 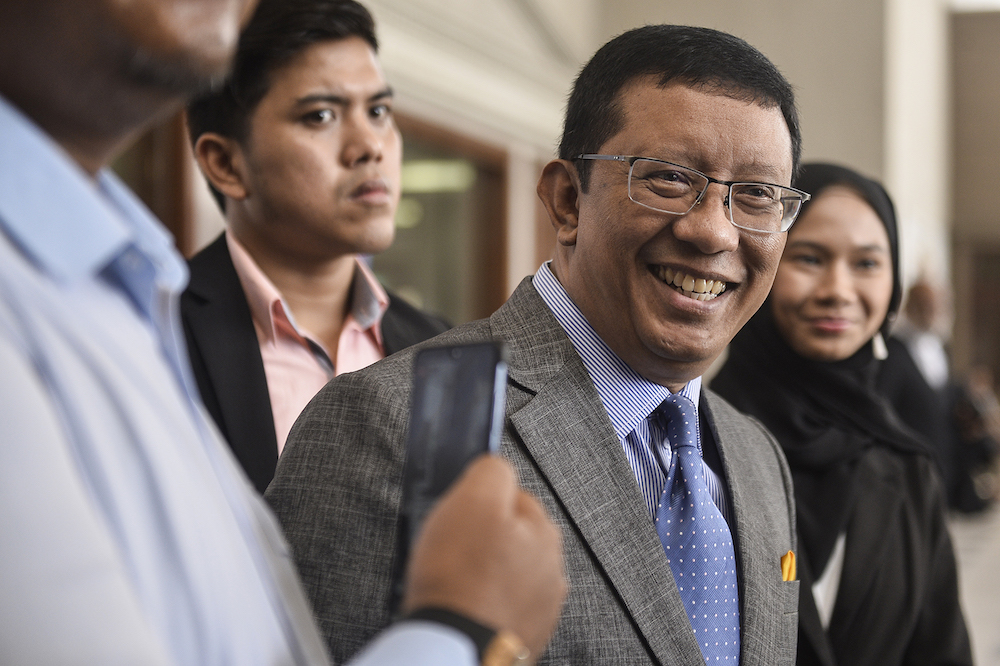 National-type schools are defined in the Education Act as primary schools using Chinese or Tamil as the main medium of instruction, and where the national language and English are compulsory subjects.

Article 152(1)(a) states that the national language shall be the Malay language and that no person shall be prohibited or prevented from using (except for official purposes) or from teaching or learning any other language.

Mohd Khairul named the education minister and the Malaysian government as defendants.

In his motion filed on October 23, Mohd Khairul sought a declaration from the Federal Court that it was unconstitutional for Parliament to pass an amendment to Sections 17 and 28 of the Education Act for the continued existence of vernacular school.

When asked about another lawsuit filed by Gabungan Pelajar Melayu Semenanjung (GPMS) and the Islam Education Development Council (Mappim) to challenge the constitutionality of vernacular school at the High Court yesterday, Shaharudin replied in the affirmative that they were aware.

“We are aware but we don’t know the details. We have no idea what they intend to do with their respective case or cases. We are on our own and they are on their own. Basically, that’s the situation,” he said.

In a statement through their lawyers, the groups said their suit followed the Federal Court’s decision on Mohd Khairul and have appointed lawyer Haniff Khatri Abdulla as lead counsel to represent them.

The groups also claimed that Section 2, 17 and 28 of the Education Act, which allowed Chinese and Indian schools to conduct their lessons in their native language, were against Article 152.

In addition, they are also seeking for vernacular schools to be declared as contravening Article 5 (right to a dignified life), 8 (Equality), 10 (Freedom of speech, assembly and association), 11 (Freedom in religion), and 12 (Rights in respect of education).

The two groups supported third languages such as Mandarin, Tamil, Arabic and Kadazan, and others including Japanese and Korean, to be taught as language subjects but they are against the use of these languages as the main medium of instruction in schools that receive public funds because that would be in conflict with the position of the Malay language as the national language.