In 2019, one Sabah village finally gets water on tap

Marius Mokinson (right) and village head Juslee Bokoot with one of the newly installed tanks at a home in Kampung Suang Duyung, Pitas. — Picture by Julia Chan
Follow us on Instagram, subscribe to our Telegram channel and browser alerts for the latest news you need to know.
By JULIA CHAN

KOTA KINABALU, Dec 14 ― Pitas in Sabah is the northernmost tip of Borneo after Kudat. To the world, its geographical location is likely its only claim to fame.

Villages in this district are sprawled inwards towards land and are far from any bustling town. Geographic isolation and its infertile land makes Pitas among the poorest districts in Malaysia with little basic infrastructure, including access to electricity and water.

Money is scarce and hard to come by. The little that the Rungus people of Pitas here earn, RM500 to RM1,500 a month from subsistence farming or fishing, is set aside for selected staple food, to journey outside their villages, and for emergencies.

Julinah Koyou and her husband Joseph Peter Gintak, a couple in their 60s who live in Kampung Suang Duyung remember a time not too distant in the past when villagers could live off the land.

“We go to the river everyday. To wash, to bathe, to gather water, to fish. You can drink the water, that was how clear it was before,” she said.

“We would be able to catch fish for dinner, or look for onggiput and tuntul,” she said, referring to the small freshwater prawns and snails or molluscs commonly found in Sabah’s rivers.

Julinah grew up in a wooden home that had a river flowing a short walk away. It was also where she raised six children in the same village. However, her children did not get to enjoy the river the same way she did. 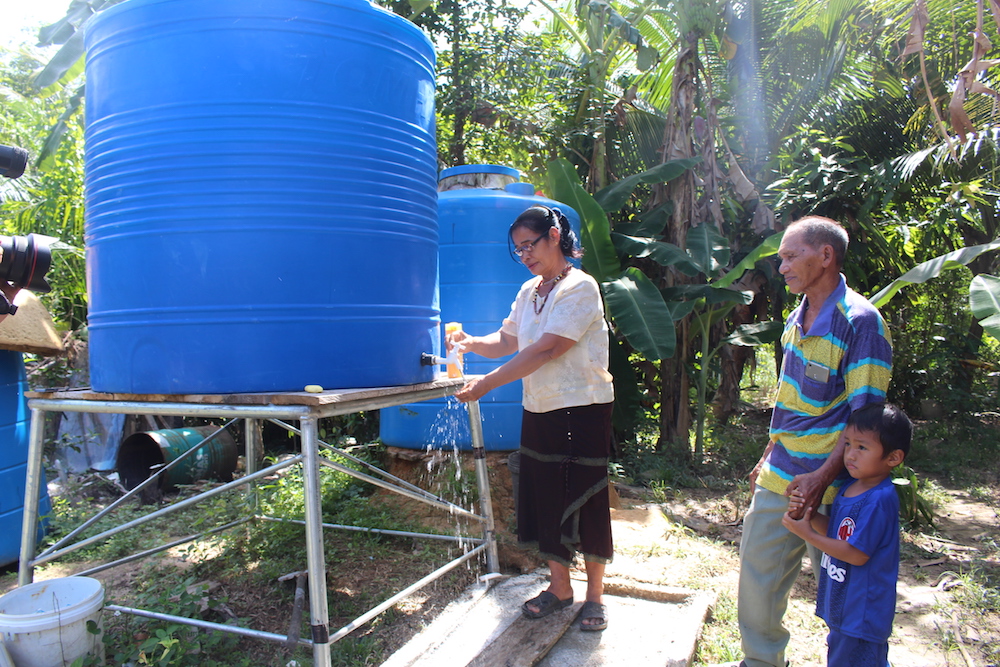 Julinah Koyou and Joseph Peter Gintak at their home with their newly installed tank. — Picture by Julia Chan

While the rest of Malaysia live on electricity and water piped into their concrete buildings, the residents in Suang Duyung and surrounding villages continued to survive on gas lamps and buckets of water they have to cart home long after independence in the late 1950s.

In the 1990s, timber barons came to Pitas. Subsequently, the crystal clear river waters turned murky and dried up.

A resilient and resourceful community, the Rungus of Pitas turned to digging wells for water. But that too eventually dried up. From then on, they could only rely on a limited water supply sent to their villages.

“The women had to carry water gallons from the central collection point to the village. If you’re lucky, the walk wasn’t far, or you had a vehicle. But we were poor, we only have a motorbike, even now, and my husband takes it to work,” Julinah said.

Other water sources were ponds and tanks, but over time, these also dried up, especially during the drought months from May to November where water rationing was crucial and villages had to travel further to collect water.

For Julinah and Joseph, the precious liquid had to be shared with their young grandson in their care while the boy’s parents are off to work in different cities.

“We had no peace of mind. Whenever water was low, we couldn’t wash, cook, bathe. Sometimes the water was so dirty, we couldn’t do anything,” Julinah said.

“Villagers sometimes develop illnesses from consumption or usage of contaminated water such as skin diseases, rashes and diarrhea.

“Sometimes it gets bad, and we have to seek medical treatment, which is a hassle ― the hospital is two hours away,” he said.

And then this year, they were approached by UMW Group and Mercy Malaysia, which have been working on setting up mobile medical and dental clinics in Sabah for the past 10 years.

These days, the mobile clinics get fewer patients, thanks to improved health services in the interior.

Looking for other ways to aid the local community, the motor corporation and the disaster relief pioneer heard of Kampung Suang Duyung’s lack of access to water.

They initiated a Water, Sanitation and Hygiene project that would not just provide clean water for their everyday use, but also include hygiene and oral health education.

“Water is a basic need, and it is unacceptable to think that a water-rich country like Malaysia would still have pockets of communities with poor access to clean water,” UMW group corporate communication general manager Badrul Rahman said.

Research was carried out to decide on the best solution and most sustainable solution.

Gravity water systems was out because of the flat land, and developing a central water distribution source to the scattered homes from one of the existing ponds was not viable due to the contamination of arsenic, E. coli bacteria and other metal traces in their existing ponds. 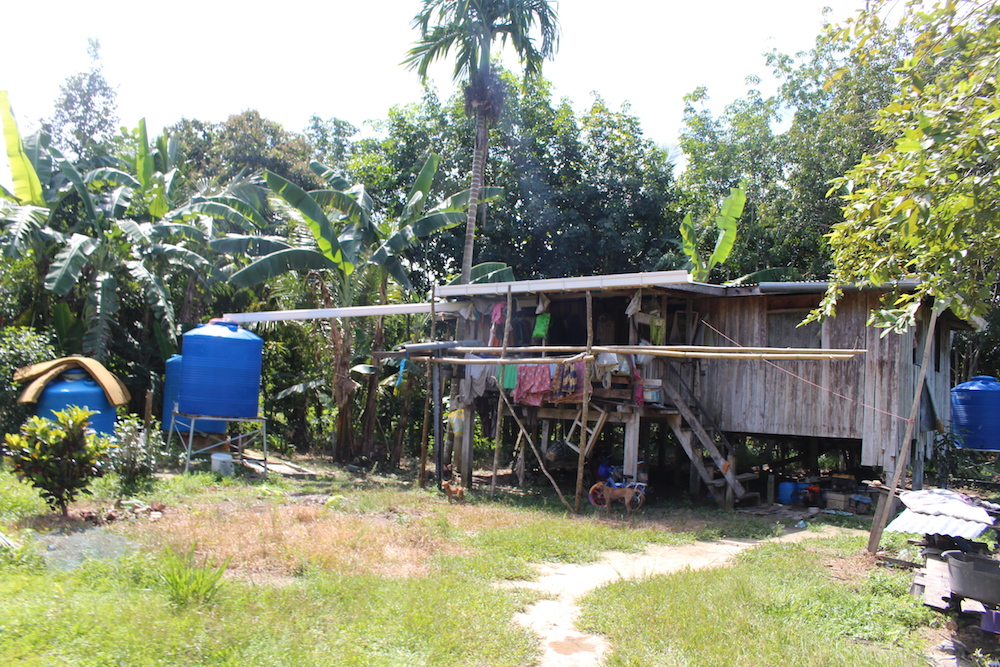 Houses in Kampung Suang Duyung, Pitas are spread out which makes it harder to arrange for basic infrastructure like water and electricity to them. — Picture by Julia Chan

The next consideration was creating tube water wells, but this too proved to be unfeasible. UMW Group and Mercy Malaysia commissioned geologists to investigate groundwater resources, but found the area to be unsuitable.

After reading a report from the Meteorology Department, the corporate partnership decided to create a rainforest harvesting system in all of the homes instead.

Some 38 homes and 160 people would benefit from some 800 gallons of waters provided by two tanks. The storage should last for up to three weeks with the estimated average use of 20 litres per day per household.

“The main objective of the project was to supplement whatever the village lacks with the aim of providing each family with 800 gallons of water,” said Badrul.

Apart from that, the corporation have also agreed to set up a communal water system for the village ― ten 5,000 gallon tanks which can be used by anyone.

Mercy Malaysia Sabah chairman Dr Anbarasu Ramalingam said that the Pitas villagers were taught how to care for the tanks and the systems installed, including changing their own filter and cleaning debris in order to keep the system working well.

“The tanks will not only be able to provide them with water for all their daily needs, but the security of having water will mean improved livelihood and sanitary practices, better health among others,’ he said.

Days after the tank was installed in her home, Julinah said that her life was already easier just knowing that water is now on tap.

“It’s made a big difference to our lives. It’s good that we don’t have to worry and can just get on with life, and looking after the family.

“Now, we just need electricity and life will be even better,” quipped her husband, Joseph.