The Dewan Tuanku Canselor at Universiti Malaya in Kuala Lumpur, October 27, 2014. — Picture by Yusof Mat Isa
Follow us on Instagram, subscribe to our Telegram channel and browser alerts for the latest news you need to know.
By SOO WERN JUN

They are Universiti Malaysia Perlis and Multimedia University, bringing Malaysia’s overall representation in the world rankings from 11 to 13. 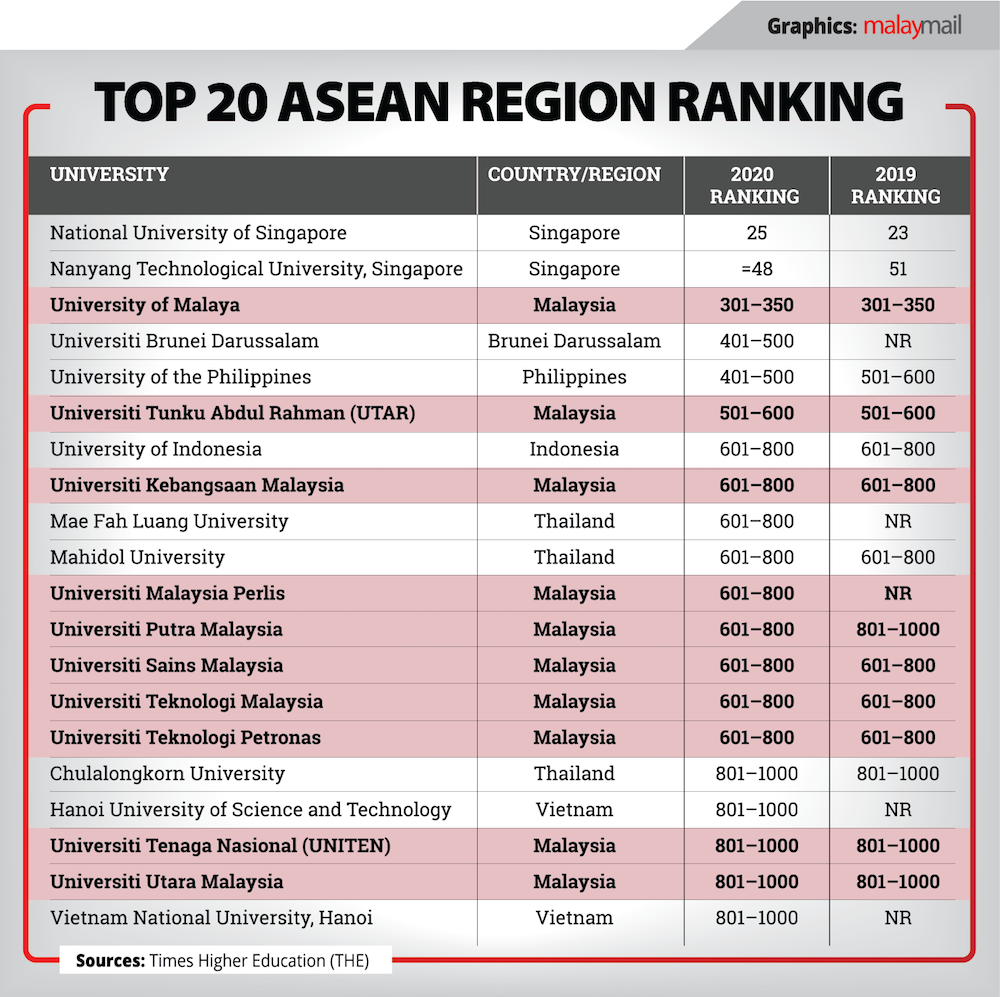 The Malaysian universities trail behind China's Tsinghua University and Peking University, which placed 23rd and 24th, while the National University of Singapore (NUS) placed 25th and Nanyang Technological University (NTU), also in Singapore, placed 48th on the global list.

Vietnam and Brunei Darussalam joined the THE global ranking for the first time.

THE pointed out that this is a reflection of an increased Asian representation that has become a running theme of the ranking in recent years with the members of Asean having played a significant role.

The rankings for 2020 also showed that Asia continues to shift the balance of power away from Europe and the US, significantly increasing its overall representation and increasing the number of universities in the global top 200 by two to 24.

THE also said the region’s universities are characterised by their excellent international outlook scores — an unusual trait among institutions in Asia — and high scores for citation impact, but lost points for teaching and research environments.

Commenting on the global trend, THE chief knowledge officer Phil Baty, said it has long been clear that the emerging countries of Asia are going to play an increasingly powerful role among the global elite of higher education.

"It must also be stated, however, that the traditional Anglo-American powerhouses will not be displaced at the top of our rankings with ease.

“Future editions of the World University Rankings will most likely reveal intense competition, and while European and American institutions face significant hurdles, Chinese and other Asian universities have challenges of their own they must meet.

"These include ensuring that the excellent academics they produce do not move abroad to more established institutions in Europe and North America; promoting a culture of scholarly creativity and freedom; and boosting ties with nations across the globe,” he said. Princeton University and Harvard University swap places to finish sixth and seventh respectively, followed by Yale University, University of Chicago and the Imperial College London rounding out the top 10.

On the Asean 2020 edition rankings, Malaysia’s UM emerged as third-best among Asean region universities. It now ranks after Singapore’s NUS and NTU, which have for the first time placed first and second on the list respectively.

As for the two newcomers on the list, Universiti Malaysia Perlis managed to secure 11th placing on the Asean list, while Multimedia University at 34th, is one rung below Unimas at 33rd place.

Thailand stays as the most-represented country in the region, with 16 institutions, up from 14 last year.

Indonesia also sees an improvement with six ranked universities in the Asean list, up from five last year.

Commenting on the Asean region's performance, THE rankings editor, Ellie Bothwell said: “It’s extremely promising to see Asean member nations continue to expand their representation in this year’s rankings, with their performance reflecting the substantial investment that these countries are putting into their universities as well as strong strategic planning.

"These nations must continue to invest in higher education if they are to further improve both in terms of quantity and quality.”

THE is a global organisation that produces data, analysis and expertise on higher education.

Now in its 16th year, the ranking includes over 1,300 universities from 92 countries, making it the largest higher education analysis to date.