KUALA LUMPUR, Aug 7 — The family of missing Irish teenager Nora Anne Quoirin is adamant the 15-year-old was abducted and “increasingly frustrated” with the Malaysian police’s tactics to find her.

According to UK’s Daily Mail, Sebastien Quoirin said the family believed his daughter was taken as her room was found empty with the window open.

In a statement released yesterday, the family also said they were worried as Nora’s learning and developmental disabilities made her unlike other minors her age.

“She looks younger, she is not capable of taking care of herself and she won’t understand what is going on. She never goes anywhere by herself. We have no reason to believe she wandered off and is lost,” they said in a statement reported by the British outlet.

Separately, Matthew Searle from the Lucie Blackman Trust, a missing persons charity representing the family, said the Malaysian police’s approach was causing frustration as the family did not accept their theory that Nora wandered off on her own.

Searle said the family was terrified over the possibility that the police are not using all its resources for the search because of the theory.

“They know Nora and what she is capable of and don’t feel that they are being listened to.

“This is a girl who wouldn’t venture into her own garden without a family member holding her hand. They are getting increasingly frustrated and are all exhausted, having not slept a great deal.” Searle was quoted as saying.

The search-and-rescue operation has entered its fourth day and, as of yesterday, involved 159 members from various agencies.

On Sunday, the teenager was reportedly found missing from her living room in the morning at The Dusun Resort, a tropical rainforest resort in Seremban, 63km south of Kuala Lumpur.

BBC reported that Nora, the daughter of Irish-French couple and who arrived from London with her family on Saturday, was here for a two-week trip.

The family has set up an email address for information leading to her safe return.

The Lucie Blackman Trust has also provided a hotline (+448000988485) and email address to receive information and leads on the missing teen. 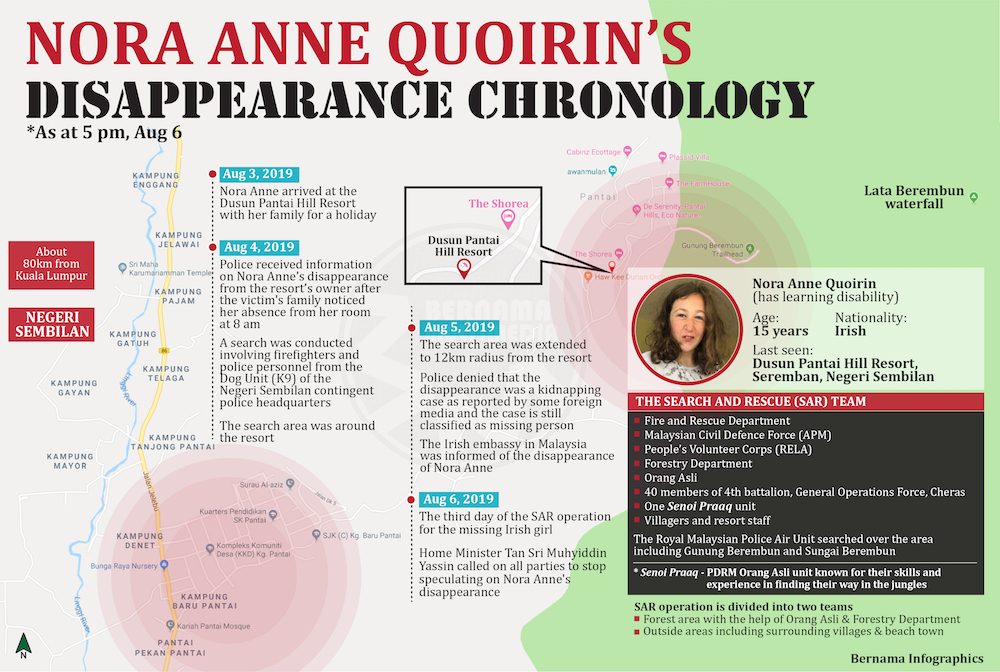