By Reena Raj and Boo Su-Lyn

KUALA LUMPUR, Sept 12 — The Dewan Negara today created history when it rejected the repeal of the Anti-Fake News Act 2018, which means that the Dewan Rakyat will have to retable the Bill with amendments.

Senator Khairul Azwan Harun from Umno said Opposition Senators voted against the repeal because they believed the law prohibiting misinformation could be improved.

“I understand that this is a very unpopular law, but we must also recognise that we live in world of fast information. Just this week the PM was a target of fake news,” Khairul said in a statement.

“Grand old institutions, such as that of the US democracy, have had their elections compromised precisely because of targeted misinformation. The threat is real and I fear our political landscape is too young to be further polarised because of fake news.”

Dewan Negara Speaker Tan Sri SA Vigneswaran said 21 supported the repeal of the Bill, 28 were against it, while three senators abstained from voting.

There are 68 senators in the Dewan Negara — 19 from Pakatan Harapan (PH); 13 from Sabahan and Sarawakian parties, Gerakan, Indian Progressive Front, and representatives from the disabled, Siam, Orang Asli, and Hindraf groups; 33 from Barisan Nasional (Umno, MCA and MIC); and three from PAS. 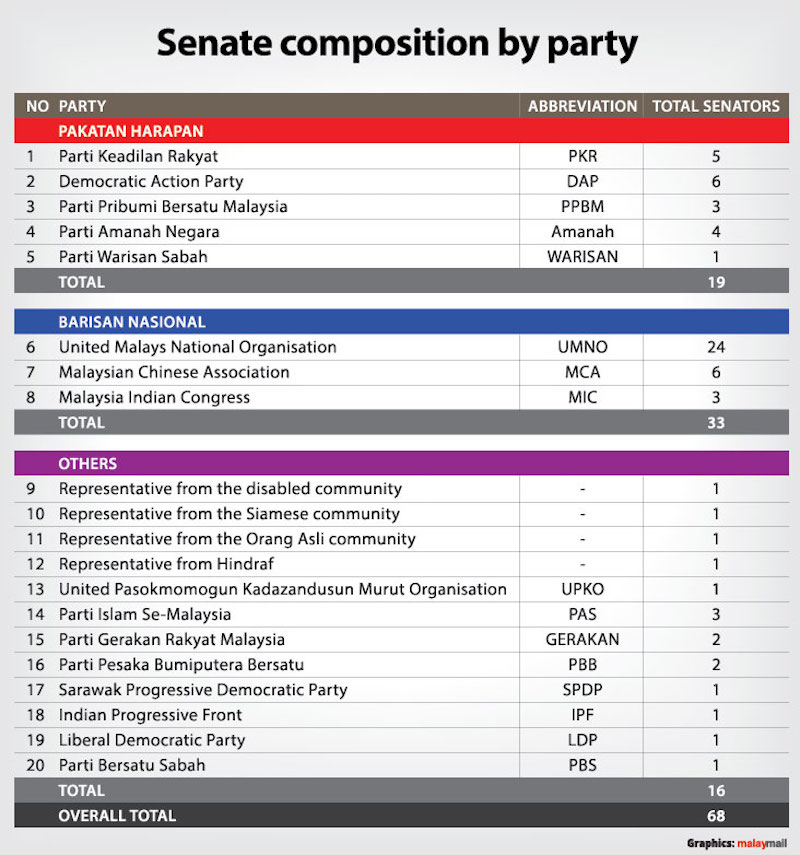 Most of the Sabahan and Sarawakian parties are allied with the PH federal government.

Only 52 out of 68 senators participated in the bloc vote today.

“I was not informed about the matter in advance about the voting. It was raised by the Barisan Nasional (BN) representative for a bloc vote to be carried out, “Vigneswaran told the Malay Mail.

It is learned that Khairul Azwan proposed the bloc vote to be carried out in the House.

Senator Datuk Seri Ti Lian Ker from MCA told Malay Mail that senators who voted against the repeal of the Anti-Fake News Act included Orang Asli and Thai representatives, while some BN senators had voted for the abolition.

The three senators who abstained from voting were from Gabungan Parti Sarawak.

“I voted against the repeal,” Ti said.

This is the first time the Dewan Negara had rejected a bill. Previously, the Senate has only instructed for Bills to be sent back to the Dewan Rakyat for amendments.

The Senate this time broke away from a decades-old perception of being the government’s rubber stamp.

When Pakatan Harapan came to power, they promised to amend or abolish several laws, including the Anti-Fake News Act.

The Bill to repeal the law was tabled on August 8 and it was passed by the lower house on August 16 with a simple voice vote.

The Anti-Fake News Act was passed by the Dewan Rakyat on April 2 and gazetted to be a law on April 11, less than a month before the 14th general election.