According to the JKSM, Muslims made 1,144 applications for child marriage in 2015, dropping to 1,019 applications in 2016, and further falling to 877 applications last year. ― Picture by Choo Choy May
Follow us on Instagram, subscribe to our Telegram channel and browser alerts for the latest news you need to know.
By BOO SU-LYN

According to the Department of Shariah Judiciary Malaysia (JKSM), Muslims made 1,144 applications for child marriage in 2015, dropping to 1,019 applications in 2016, and further falling to 877 applications last year.

Up to June 30 this year, 461 applications were made to the Shariah court for permission to wed Muslim minors, making it a total of 5,823 applications in five and a half years from 2013 to June 2018 throughout Malaysia. 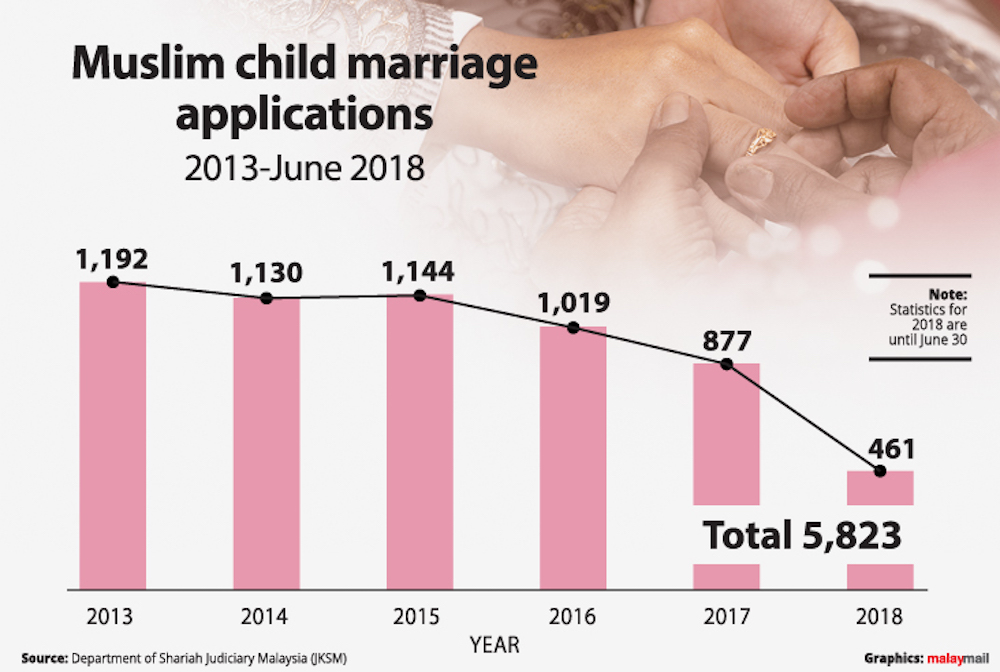 “These statistics do not depict the total number of underage marriages because there are some cases where the court approved the applications, but the parties did not follow through with marriage,” a JKSM spokesman told Malay Mail.

Malay Mail had requested JKSM for statistics on the number of child marriages between 2007 and 2017, broken down according to state and the age of husband and wife.

But JKSM merely provided figures on applications to Shariah courts for approval for underage marriage from 2013 up to June 30 2018. JKSM also did not answer queries on why child marriage applications have been dropping in recent years.

The minimum legal age for Muslims to marry according to state Islamic family laws is 18 and 16 for a male and female respectively, but children below these ages can still wed if they get the consent of a Shariah judge.

According to JKSM statistics, the top three states with the highest number of Muslim underage marriage applications from 2013 up to June 2018 were Sarawak (974), Kelantan (877) and Sabah (848).

Selangor and Federal Territories saw 418 and 189 applications respectively, while Penang recorded the lowest number of Muslim child marriage applications at 91.

Under the federal Law Reform (Marriage and Divorce) Act 1976, the legal age of marriage for non-Muslims is 18, but a girl aged 16 can be legally married if the state chief minister/ mentri besar or in the case of the federal territories, its minister, grants a license. Non-Muslims below 16 cannot get married according to the law, but there is no written minimum age of marriage for Muslims.

Child marriage has re-emerged as a hot-button issue since a Kelantanese imam recently took an 11-year-old Thai girl as his third wife without the Shariah court’s permission. The 41-year-old man reportedly said he had wanted to tie the knot with the girl since she was seven years old.

Although Pakatan Harapan controls the federal government and eight states, while its ally Warisan is in power in Sabah, the new coalition has been slow to amend legislation to ban child marriage.

Minister in the Prime Minister’s Department in charge of Islamic affairs Datuk Mujahid Yusof Rawa said Wednesday that his department has initiated discussions towards ending child marriage, but did not give a time frame for it. 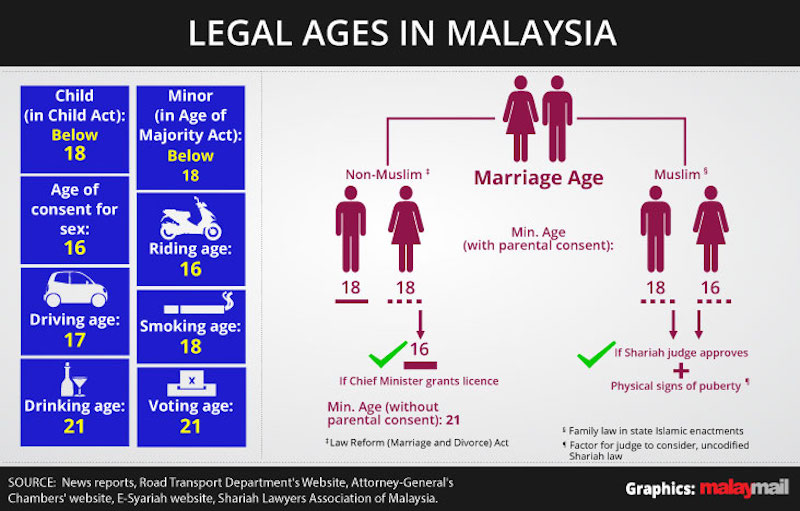