KUALA LUMPUR, June 27 — Police maintained today their integrity in the seizure of cash, jewellery and handbags in their 1Malaysia Development Berhad (1MDB) investigation that they estimated to be worth RM1.1 billion.

“I’m sure many might be thinking that some of the exhibits might be pilfered. But I am 101 per cent sure of their integrity. What was seized is what has been counted and verified.

“The counting and verification process was done just like you see in polling stations and counting centres... with observers to ensure the exhibits were secured and not compromised at any time,” he told Malay Mail.

There were experts to value the gems and handbags, photographers, diarists, officers in charge, observers, Special Action Unit officers, police outriders and MPV assets for transporting.

“We took all these measures to ensure everything was done with utmost integrity and safety right from transporting the items to the safekeeping area, counting area and back to Bank Negara.

“That’s why it took a long time, because the numbers and value of the exhibits were too large. We don’t want the public to undermine our professionalism in safeguarding the exhibits,” he said.

This morning, in his press conference, Amar also said police usually count raid seizures on the spot, but the numbers in this case were too big and they had to also look into the lack of logistics such as air-conditioning, chairs and the need for experts to sit through the time-consuming process.

The police even worked through the Hari Raya holidays to count and verify the authenticity of all the seized items.

On May 20, Najib’s former lawyer, Datuk Harpal Singh Grewal, accused the police of demanding meals and helping themselves to chocolates at residences linked to Najib during the ongoing raids.

Amar, who headed the series of raids, then requested for Harpal to come forward with more details and to identify the police personnel involved, but there has been no news from Harpal to date.

This morning, Amar revealed the appraised cost of 12,000 pieces of jewellery alone to be RM440 million, with their market price estimated at between RM660 million and RM880 million.

The total amount of cash seized is RM116.7 million, including RM114 million in 26 different currencies contained in 35 bags seized from three units at Pavilion Residences and another half a million ringgit in cash from Najib's home in Jalan Duta. 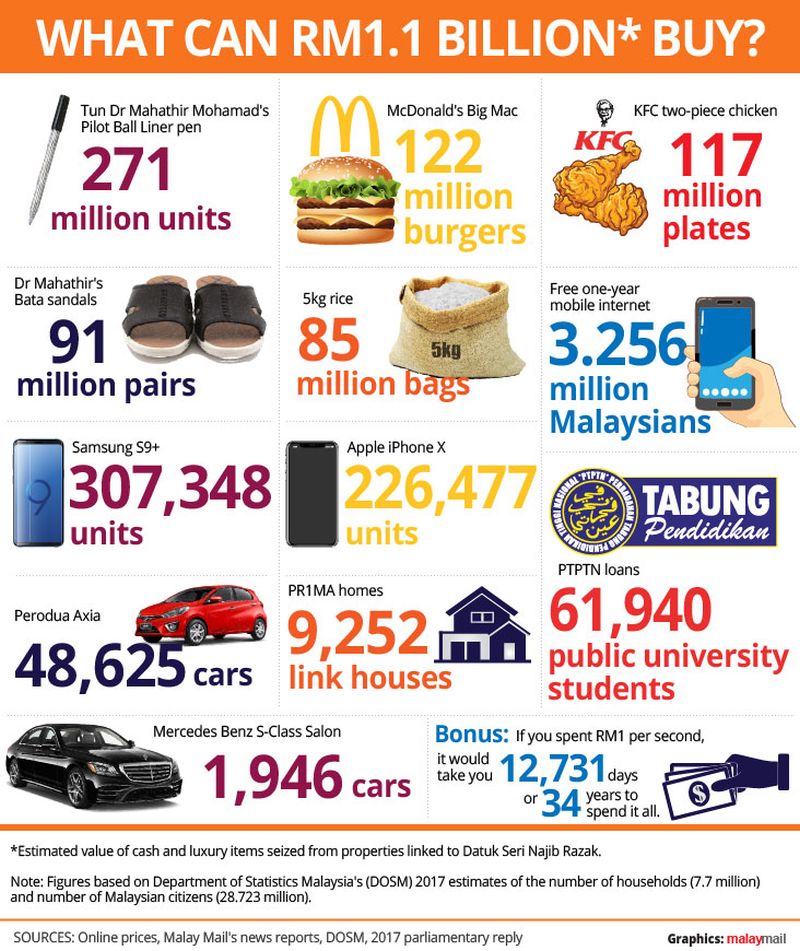