Who is our new AG, Tommy Thomas?

KUALA LUMPUR, June 5 — Malaysia is abuzz now over the appointment of veteran lawyer Tommy Thomas as the next Attorney-General (AG), the federal government's top legal adviser and public prosecutor.

Yang di-Pertuan Agong Sultan Muhammad V has given his consent to the Pakatan Harapan (PH) government’s choice of Thomas as the AG.

In a statement issued by the comptroller of the royal household Datuk Wan Ahmad Dahlan Ab Aziz, His Majesty also agreed to the terms to terminate the incumbent Tan Sri Mohamed Apandi Ali, who is on garden leave.

So who is Thomas?

He is best known as a constitutional law expert and a civil litigator in court cases in matters as varied as administrative law, banking, finance, corporate, and commercial law.

He has been a lawyer in Malaysia for 42 years, having been called to the Bar in the United Kingdom in 1975 and called to the Malaysian Bar on June 3, 1976.

According to a profile on Gerakbudaya's website, the 66-year-old Kuala Lumpur-born is also an alumni of Victoria Institution, the University of Manchester and the London School of Economics.

He had also served the legal community in peninsular Malaysia through the Malaysian Bar's governing body Bar Council, which he was a member of during 1984-1988 and 1993-2001 — including a stint as Bar Council secretary from 1995-1997.

Thomas was involved in many high-profile cases, including over something that happened 30 years ago during the rule of then (and current) Prime Minister Tun Dr Mahathir Mohamad.

Thomas represented the then Supreme Court's Lord President Tun Mohamed Salleh Abas (who held the position equivalent to today's Chief Justice of Malaysia), who was one of six judges suspended under the Mahathir administration and removed from office in what has been dubbed Malaysia's 1988 judicial crisis.

He was the lawyer for the PAS-led Terengganu state government when it filed in March 2001 a lawsuit against national oil giant Petronas and the federal government, for breach of contract over discontinued payments in cash for oil royalty to the state government.

He had also represented the PAS-led Kelantan state government in its lawsuit filed in August 2010 against Petronas over the latter's alleged breach of contract to make cash payments for oil royalty.

He also represented lawyer Sivarasa Rasiah in the latter’s challenge against a law barring him from being a Bar Council member while holding a political party position (then Parti Rakyat Malaysia vice-president). In 2009, the Federal Court decided that the provision ― Section 46A(1) of the Legal Profession Act ― was valid and constitutional.

He was also on the legal team for then Perak Speaker V. Sivakumar, who was embroiled in the 2009 Perak constitutional crisis.

Thomas also successfully helped defend the election watchdog Bersih 2.0 (without charging anything) in a lawsuit where the government attempted to claim RM110,543.27 for property damage during an 2012 rally, with the Federal Court denying on January 19, 2017 the government's bid to pursue the claim.

Shafee managed to block the motion from being discussed during the AGM, but later lost in 2016 in the High Court in his defamation suit against Thomas and the latter's seconder, former Court of Appeals judge Tan Sri VC George, over the proposed motion.

He had also launched on July 29, 2016 two books named Abuse of Power and Anything but the Law, which were collections of his essays throughout 34 years on law and the Federal Constitution; and politics and economics.

He has written on complex and diverse topics, including why he thought the Court of Appeal's 2013 ruling  in upholding a government ban on the use of the word “Allah” in the Catholic Church's internal publication Herald was constitutionally wrong.

In a lengthy 2005 paper, he had also examined the question of whether Malaysia is an Islamic state and concluded that Dr Mahathir's September 29, 2001 declaration that the country is an Islamic state was not based on the Federal Constitution and the law.

He had also written on the 2009 Perak constitutional crisis. 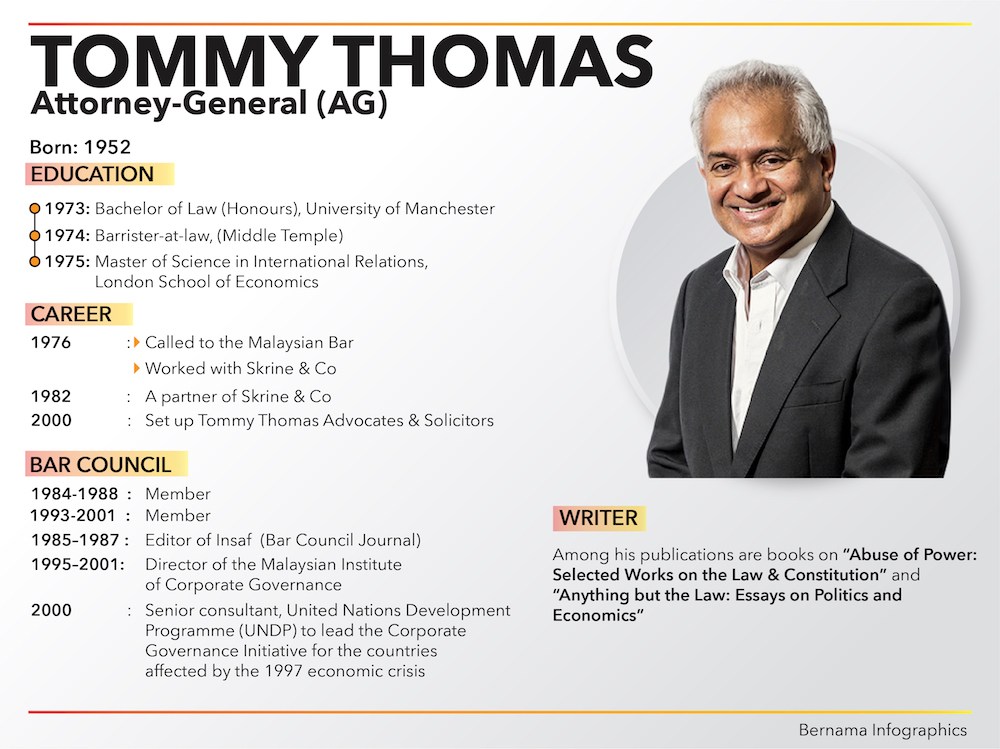