PUTRAJAYA, Feb 22 — Social activist Adam Adli has today been freed of a sedition charge over a speech in 2013 in which he was said to have called for a change of government through undemocratic means.

A three-man bench in the Court of Appeal acquitted and discharged the case on the grounds of multiple misdirections of the law during the Sessions and High Courts verdicts.

“This acute misdirection of the law had caused the conviction to become unsafe, as the charge is not related to the offence,” said Justice Datuk Mohd Zawawi Salleh who headed the panel.

This was the final stage for Adam’s case, since it had started at the Sessions Court.

Adam together with more than 20 family members and friends were present in court. He was represented by lead counsel Datuk Gurdial Singh Nijar during the appeal.

Following proceedings, Adam seemed emotional as he addressed reporters and a number of his supporters outside the courtroom.

“This is a victory for all other victims persecuted under the Sedition Act, those with us and no longer around, may this be a reference to them.

“Also, this is dedicated to my late father, the lawyers who tirelessly stood by from the moment I was arrested, my family and all those who supported me,” he said. Adam’s father passed away last year.

“The decision today proves Malaysians have a right to voice their opinions,” he added.

Meanwhile, his lawyer Gurdial said authorities need to be more careful when charging people under the Sedition Act.

“Sedition is one step away from treason and it is a very serious crime. The Attorney-General’s Chambers, the police, should be careful as this is a serious offence which results in imprisonment,” he said.

Gurdial praised the acquittal decision saying the court had struck the right balance between freedom of speech and the protection of disorder.

“We are very happy with the outcome and result, it means from henceforth, we hope there will be a balance before people are charged for what essential is a very serious crime,” he added.

In May 2013, a week following the 13th General Elections, Adam and fellow student activist at that time Muhammad Safwan Anang were accused of making seditious speeches during a youth event.

Adam was then found guilty by the sessions court on September 19, 2014, and sentenced to 12 months imprisonment.

His sentence was then substituted with a RM5,000 fine while his conviction upheld by the High Court in February 2016.

A year later, an application to the court of appeal was delayed after a new Court of Appeal bench was constituted following a request by a deputy public prosecutor.

Muhammad Safwan, meanwhile, initially also charged for sedition, was similarly acquitted by the Court of Appeal in December last year. 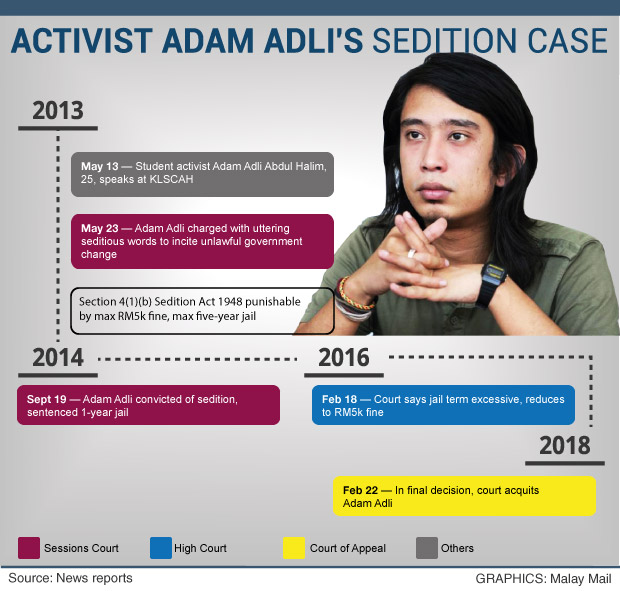