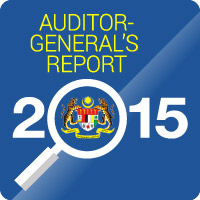 KUALA LUMPUR, Nov 21 — The construction of a RM73 million service technical centre for the care of Malaysia’s Sukhoi SU-30MKM fighter jets at the Gong Badak, Terengganu airbase has been less than satisfactory, according to the latest findings in the Auditor-General’s 2015 Report.

Released today, the second series of the federal audit report highlighted that the biggest setback to the project was the due to the choice of contractor, Syarikat Pembenaan Setia Jaya Sdn Bhd, appointed in March 10, 2014 for the Defence Ministry project.

A formal contract was signed on July 4, 2014 for the project to be carried out and backdated to March 24 that same year. It was to be completed by September 20, 2015.

However, Pembenaan Setia Jaya was found to be an inexperienced and financially unsound company.

“During the first 10 months, a sluggish construction progress had resulted in the takeover by a nominated sub-contractor on 15th January 2015,” the report said, without naming the replacement.

The federal audit conducted between April and June this year also found that a second time extension for the project was not approved, despite the issuance of a Certificate of Non-Compliance.

The A-G recommended the Defence Ministry ensure that future contractors appointed to be experienced, qualified and capable of executing the project for which they are contracted to build.

It also said that continuous monitoring was required to ensure such construction projects meet the stipulated specifications and guidelines.