KUALA LUMPUR, Nov 1 ― Malaysia was ranked below Singapore in a survey on internet freedom, a research house said, citing arrests under the Sedition Act 1948 here for online remarks.

According to the Freedom on the Net 2015 report by US-based NGO Freedom House released this week, Malaysia scored 43 out of 100, with 100 indicating the least free, worse than 2014’s 42 score, while Singapore scored slightly better than Malaysia this year at 41.

“Online content is not restricted in general, but the government is known to have blocked sites perceived as critical,” the Freedom of the Net report said about Malaysia.

“While the digital news media has established a stake in the information market, some news sites have been excluded from government press conferences during the coverage period, at a time when online journalists are also being targeted for rights violations,” the report added.

The Freedom on the Net 2015 report found that internet topics with widespread and repeated censorship in Malaysia were the criticism of authorities, political opposition, and blasphemy, while topics with sporadic censorship were conflict, corruption, satire and social commentary.

Singapore, in comparison, censored heavily on blasphemy, and sporadically on the criticism of authorities and satire.

Many government-linked companies and public universities in Malaysia restrict access to news portal Malaysiakini and other sites perceived as politically sensitive, said the report.

“Two bloggers were jailed in the first quarter of 2015, while two others escaped court action by seeking political asylum elsewhere. A number of civil society activists, politicians, and a journalist have been hauled up over their online remarks.

“The police continue with their crackdown, armed with the government's promise of a sedition law with harsher penalties, all creating a chilling effect on social media users. At the same time, there were fewer distributed denial-of-service (DDoS) attacks targeting alternate news portals and opposition websites,” the report noted.

While the internet is generally accessible in Malaysia, the average internet speed is still comparatively slow, said the report, citing a survey by global broadband testing and web-based network diagnostic applications company Ookla in May 2014 which found that the average broadband speed in Malaysia was slower than Cambodia and barely ahead of Myanmar.

Iceland topped the Freedom on the Net 2015 survey with a score of 6 and was deemed “free”, while China scored the worst at 88 and was considered “not free”. Both Malaysia and Singapore were given the status “partly free”.

The annual Freedom on the Net report on 65 countries found that internet freedom around the world declined for a fifth consecutive year as more governments censored information of public interest, while also expanding surveillance and cracking down on privacy tools.

Globally, the report found that content removals have increased as authorities in 42 of the 65 countries assessed required private companies or internet users to restrict or to delete web content dealing with political, religious, or social issues, up from 37 the previous year.

Arrests and intimidation also escalated, with authorities in 40 of 65 countries imprisoning people for sharing information concerning politics, religion or society through digital networks.

Governments in 14 of 65 countries passed new laws to increase surveillance since June 2014 and many more upgraded their surveillance equipment.

According to Freedom House, democracies and authoritarian regimes alike stigmatised encryption as an instrument of terrorism and many tried to ban or limit tools that protect privacy. 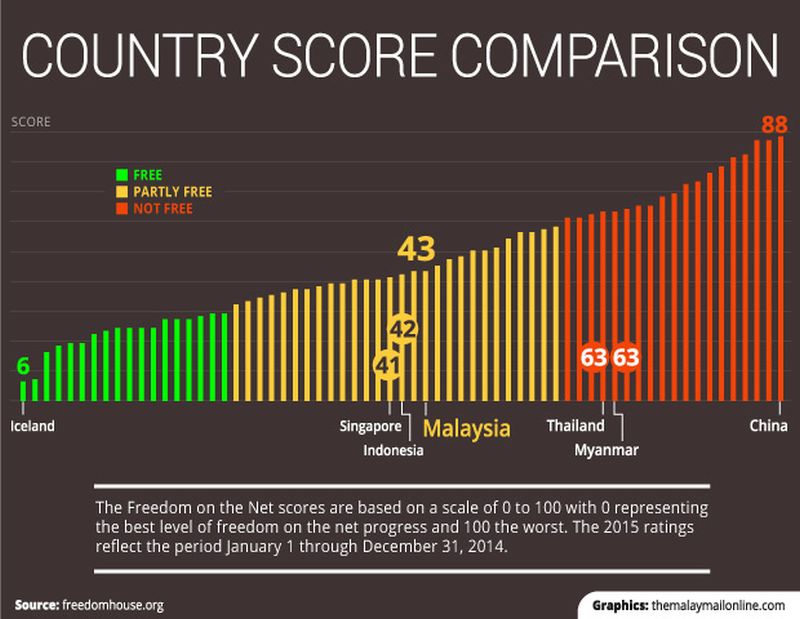