Homeless in the city: Falling through the cracks (VIDEO)

Volunteers from Need to Feed the Need soup kitchen handing out food to the homeless and urban poor at Jalan Tuanku Abdul Rahman. — Picture by Choo Choy May
Follow us on Instagram, subscribe to our Telegram channel and browser alerts for the latest news you need to know.
By BOO SU-LYN

KUALA LUMPUR, July 4 — Nuralda Abu Bakar, a mother of four young children, goes to soup kitchens in the capital every day, but the 43-year-old is not considered homeless because she lives in a rented room.

With no job, Nuralda says she does not have enough money to buy food and other necessities. Her husband — who sells watches and other small items at a stall in Chow Kit — supports a second wife and six children. They live in a room next to Nuralda’s.

For Nuralda and others like her, soup kitchens run by various non-governmental organisations throughout the week in Kuala Lumpur provide not just meals, but also milk, diapers, and clothes. They even give disadvantaged children the luxury of birthday celebrations. 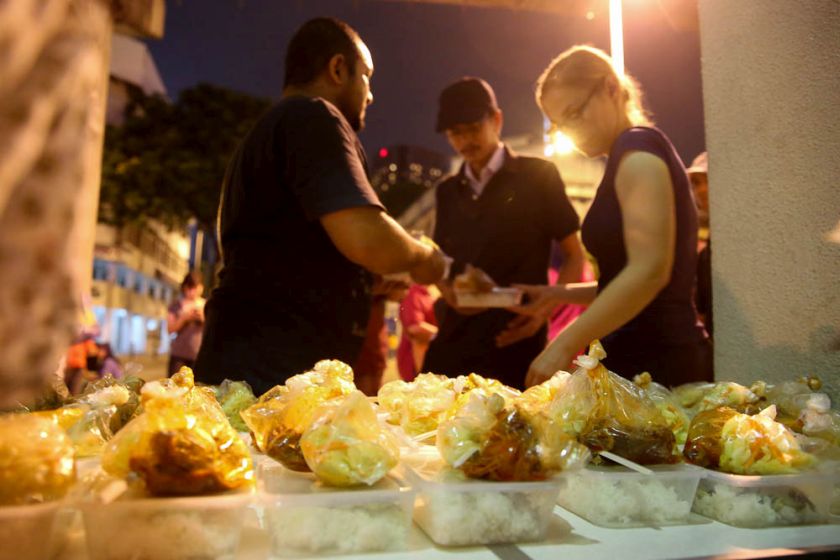 Volunteers from Need to Feed the Need soup kitchen handing out food to the homeless and urban poor at Jalan Tar. — PIcture by Choo Choy May

On Monday, the Women, Family and Community Development Ministry is scheduled to start “Ops Qaseh” to remove the homeless from the streets of Kuala Lumpur but NGOs say many will slip through the cracks.

Some cannot be considered homeless even though they count among the city’s poorest and most vulnerable — including people renting rooms but without enough cash for food, people in and out of the streets after losing their means of an income and elderly people who are not fit enough for work but cannot qualify for old folks’ homes because they are under 60.

Munirah, who runs the Pertiwi soup kitchen that provides meals, basic medical care and haircuts for the homeless, pointed out that even odd jobs like selling recyclable items gave the homeless more money in their pockets compared to full-time work like factory jobs that imposed various salary deductions. Pertiwi soup kitchen chief Munirah Hamid speaks to The Malay Mail Online at the soup kitchen on June 23, 2014. — PIcture by Choo Choy May

Many street people have mental and physical illnesses, others are victims of abuse or are from troubled backgrounds, some have drug or alcohol addictions, she said.

There are also ex-convicts, elderly and impoverished folk and people who identify as lesbian, gay, bisexual or transgender, she added.

Their troubled backgrounds and the way they have been forced to live make it impossible for many street people to hold down ordinary jobs.

“They can’t do a nine-to-five job. They can only work twice a week or half a day because of their short attention span,” she said.

“There are people who are not fit enough for work because they’ve been on the streets for so long. They’ve got all these ailments, so they’re not fit. All these cases fall outside the government structure,” said Munirah.

Kechara Soup Kitchen project director Justin Cheah said some elderly homeless people did not want to go to welfare homes because to them it is akin to prison, while ex-convicts were forced to look for low-income, unsustainable jobs where their police records would not be checked.

“Some people also come from other states to find jobs here, but they can’t find jobs, so they sleep on the streets for a while,” said Cheah.

“For them, it’s  better here than their villages as the streets are in better condition and they’re sometimes nicer. Just no walls,” the NGO worker added.

Cheah said while Ops Qaseh might help “to a certain extent”, it was better for the government to address the root cause of the individual problems of the homeless.

“This guy recently came here from his home town. He got a job as a despatch rider. Some companies say you need a bank account. He didn’t want them to know that he’s homeless. So what we did was we helped him to open a bank account and gave him clothes and toiletries,” said Cheah, adding that the man’s workplace provided hostel accommodation. People get free haircuts at the Pertiwi soup kitchen, June 23, 2014. — PIcture by Choo Choy May

Cheah said Kechara channels people to various places, depending on their needs, including hospitals, rehabilitation centres, or the United Nations’ refugee agency (UNHCR), besides helping to relocate family members and supplying groceries to poor families every month.

Kandasamy Muthuraman — who lives in a rented room in downtown Kuala Lumpur that costs RM300 a month, eating up almost all of his pay — dispels the stereotype that street people are lazy.

Despite suffering a painful skin condition with red blisters all over his body, the 45-year-old insists on continuing his job selling recyclable boxes for RM30 a day and refuses to patronise soup kitchens, even though he can only afford a single meal of rice, fish and vegetables for dinner and “teh o’ ais limau” (iced lime tea) for breakfast every day.

“I don’t want free food. I must work to get food,” Kandasamy told The Malay Mail Online recently, while waiting for a free haircut at the Pertiwi soup kitchen. 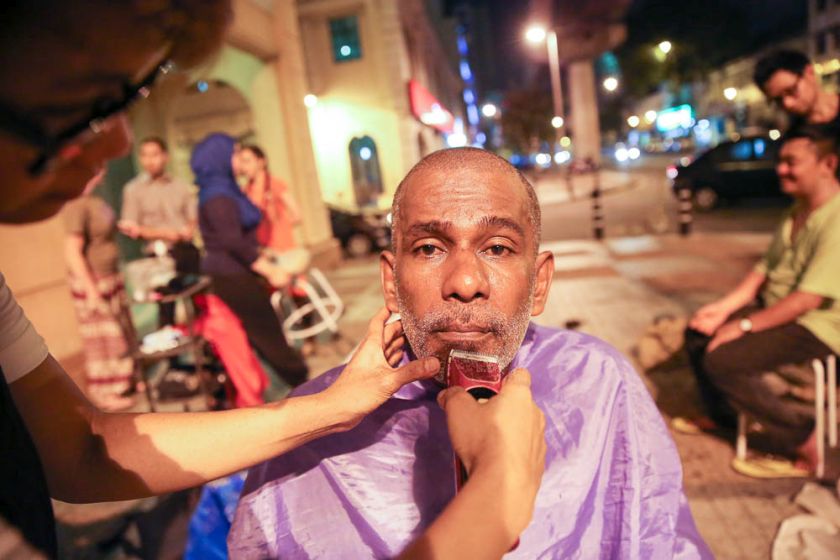 Kandasamy Muthuraman getting a free haircut at the Pertiwi soup kitchen, June 23, 2014. — Picture by Choo Choy May

With a sigh, he said he was kicked out from his family in Perak years ago and that he had quit working as a security guard because he had not been paid.

“I can’t work much because my legs are painful, I have chest pains and I can’t breathe. But I must bear it, walk, work, pay for a room and buy food,” said Kandasamy.

Yati, a 49-year-old Malay woman, said the government should not ban soup kitchens as not everyone who go there are homeless.

“I stay in a DBKL flat. Even though I’ve a place to stay, I’m not financially stable, so I need this help,” Yati, who did not want to give her full name, told The Malay Mail Online at the Need to Feed the Need soup kitchen near Chow Kit.

Ops Qaseh to be “comprehensive”

“This operation will ensure that there are no more Malaysians begging and wandering around the streets without getting the appropriate protection,” Rohani told The Malay Mail Online in a recent email interview.

“They will be given care and rehabilitation for three years and can be released early under two conditions, as per Section 8(1) of the Destitute Persons Act 1977, which are: The authorities are satisfied that the resident has obtained appropriate work to sustain themselves or has been released to someone who can support and take care of them,” she said.

Those who suffered drug addictions or mental illnesses, for example, would be handed over to the AADK or the Health Ministry.

The minister said the DBD centres — which are located in Mersing, Johor; Jerantut, Pahang; and Kota Kinabalu, Sabah — would teach the homeless skills like sewing, agriculture, handicraft, and other vocational skills, while those who were already skilled and healthy would be matched to jobs at supermarkets, cleaning jobs, factory work, jobs as security guards and construction work.

“The Sungai Buloh ‘Pusat Sehenti Bina Diri (PSBD)’ is a transit place for beggars or the homeless until a court order is obtained to shift them to whichever DBD or RSK,” said Rohani, adding that the RSK, or shelters for the elderly homeless, were located in Johor, Negri Sembilan, Perak and Terengganu.

Ops Qaseh differed from previous crackdowns on the homeless in which people were frequently arrested and then released as the operation will be “comprehensive” and “continuous”, she added.

Rohani cited the latest statistics showing that there were 1,646 homeless people throughout Malaysia as of 2010, with 1,387 homeless in Kuala Lumpur; 150 in Georgetown, Penang; 99 in Johor Baru, Johor; and 10 in Kuching, Sarawak.

The data also showed that the majority of beggars are locals, not foreigners.