People gather to celebrate the legalisation of cannabis at the ‘Thailand 420: Legalaew!’ weekend festival hosted by Highland in Nakhon Pathom province on June 11, 2022. — AFP pic
Follow us on Instagram, subscribe to our Telegram channel and browser alerts for the latest news you need to know.

NAKHON PATHOM, June 13 — The pungent smell of smoke was unmistakable as revellers celebrated under the stars at a major Thai cannabis festival following the kingdom’s decision to begin relaxing the laws around the drug.

Thailand has long been known for its tough drug laws, but the government has steadily liberalised them in recent years and on Thursday the plant came off the banned narcotics list, decriminalising cultivation and possession.

While the changes stop short of Canada and Uruguay’s decisions to fully legalise recreational use, Thailand hopes to cash in on the growing global market — already worth billions of dollars — for legal cannabis products, particularly in food and medicine.

At a festival organised by marijuana advocacy group Highland Network, several thousand happy attendees made the most of the newly relaxed rules.

“As soon as we got through to the other side, we sparked up,” said Steve Cannon, 62, who came with a group of friends.

“Since then, people have been handing me joints all afternoon and I couldn’t tell you what a fair number was now, but I have been smoking all afternoon,” said the American jazz musician, who has lived in Bangkok for the past 15 years. 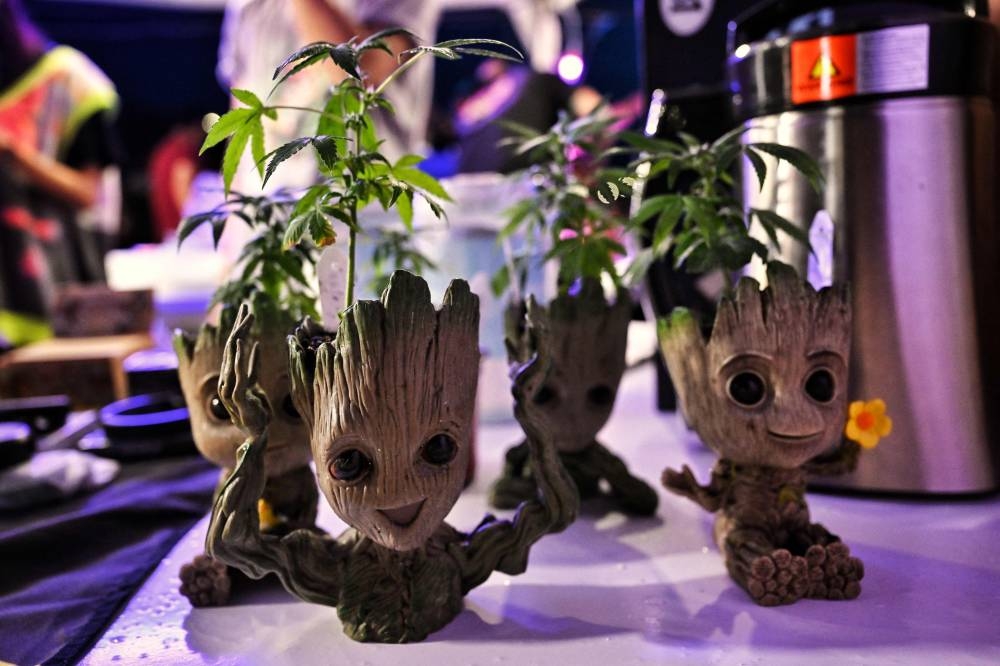 Plants are displayed as people gather to celebrate the legalisation of cannabis at the ‘Thailand 420: Legalaew!’ weekend festival hosted by Highland in Nakhon Pathom province on June 11, 2022. — AFP pic

Roughly 3,000 attendees made the journey to White Sands Beach in Nakhon Pathom province, east of Bangkok, where stalls hawking everything from T-shirts and bongs to marijuana buds and hash brownies jostled with stages and bamboo palisades around an idyllic lake.

“We have been waiting for this time for so long,” said Victor Zheng, owner of weed dispensary Nature Masters.

He gave advice to customers on his products including enriched soil for cultivation and buds and flowers for consumption.

“You see the people, they are coming and they are so happy,” he said. “Not just us, the customers have been waiting for this time.”

In 2018 Thailand legalised medicinal cannabis — a landmark move by a country in Southeast Asia, where anti-drugs laws are notoriously harsh — and the government has invested in the extraction, distillation and marketing of oils from the plant.

Analyst reports suggest that over the coming decade the legal cannabis market could be worth anything from US$50 billion to US$200 billion (RM220 billion to RM883 billion) as countries relax laws around personal and medical use.

Thai businesses are moving to cash in on the liberalisation, including Charoen Pokphand Foods — the food and farming subsidiary of giant conglomerate CP Group. People listen to bands as they gather to celebrate the legalisation of cannabis at the ‘Thailand 420: Legalaew!’ weekend festival hosted by Highland in Nakhon Pathom province on June 11, 2022. — AFP pic

The new rules leave recreational use in a grey area — smoking it outside your home could still get you arrested, though under “public nuisance” laws rather than drugs legislation.

And cannabis products with more than 0.2 per cent concentration of tetrahydrocannabinol (THC) — the psychoactive compound that produces the drug’s “high” — remain illegal.

But while there was a police presence at the festival, officers appeared more curious than censorious.

Festival co-owner Arun “Max” Avery, 35, said he had no worries following the law’s implementation and the publicity surrounding it. Vendors sell strains of cannabis to celebrate the legalisation of cannabis at the ‘Thailand 420: Legalaew!’ weekend festival hosted by Highland in Nakhon Pathom province on June 11, 2022. — AFP pic

Thais had cooked, created and medicated with cannabis long before prohibition, he said, so “to have their native plant back into their hands is just amazing”.

“People are free to do whatever they want with it,” he added.

And people at the festival were certainly enjoying themselves.

Joey, who only gave his first name, giggled as he puffed and chatted with friends, gently swaying.

“It is so relaxing. My stress is released,” he said. “Smoking puts a smile on my face.” — AFP