All year round: Malaysian expert cautions about the dangers of flu and what can be done

A report by the World Health Organisation states that the Influenza virus or commonly known as the flu has a whopping five million severe cases and results in 650,000 deaths yearly. — Pexels.com pic
Follow us on Instagram, subscribe to our Telegram channel and browser alerts for the latest news you need to know.

KUALA LUMPUR, Oct 9 — Flu may be seasonal in the American and European continents but not so in countries like Malaysia.

Universiti Kebangsaan Malaysia Medical Centre infectious disease unit head Dr Petrick Periyasamy said even though there were spikes during the monsoon season in the northern and southern areas of Malaysia, it was best to stay vigilant all year round.

“It is technically all year round because of the weather,” he said in advising people to remain vigilant for the illness.

“I think a lot of people do not realise the impact of the flu actually. Most of them might confuse the flu with the common cold where you only get a stuffy nose, sneezing and sore throat and they would usually wait it out.”

“But the flu or Influenza is more serious because aside from getting fever, cough and experiencing fatigue, those in the high risk group can actually develop complications.”

He said this included being prone to seizures or getting meningitis, lung pneumonia, severe muscle pain and heart failure.

High risk groups were usually children less than five years old and patients above the age of 65.

Apart from that, people with medical conditions such as heart, liver or lungs problems as well as people who take steroids and pregnant ladies are also categorised as high risk.

Those in this group have a higher chance of developing other serious symptoms if they were to be infected by the flu.

A report by the World Health Organisation states that the Influenza virus or commonly known as the flu has a whopping five million severe cases and results in 650,000 deaths yearly. Dr Petrick also highlighted that the flu was constantly misinterpreted with the common cold and it was important to recognise the symptoms.

“Once recognised, it is best for them to see a doctor immediately because the Influenza virus is best treated in the first 48 hours.” 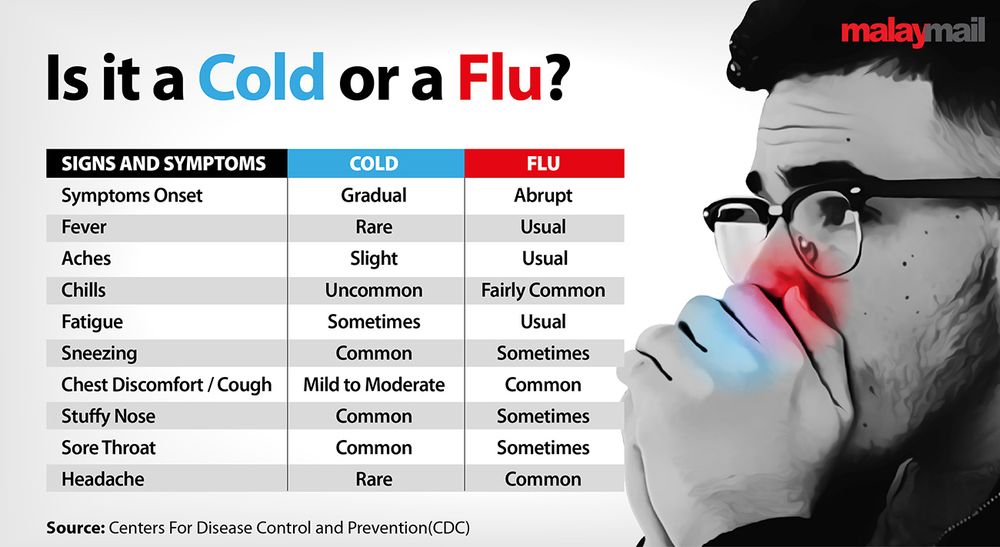 The differences between a common cold symptom and the flu as according to the Centers for Disease Control and Prevention (CDC).

In Malaysia, the amount of seasonal flu injections given is around 1.5 per cent of the general population, which is very low.

Dr Petrick and his team conducted a surveillance study on Influenza rate around the Klang Valley and Selangor and found that the Influenza rate for outpatients was 25 percent.

It is 15 per cent for hospitalised patients but this was based on surveillance with the actual numbers might be higher.

“The reason we’re not very sure is probably because the test itself is not thoroughly done.”

“Plus it cost a bit of money to pay for the test, so people would rather just treat you with something rather than to test you, so we really don’t have any accurate numbers of our Influenza rate,” Dr Petrick told Malay Mail.

Most of the people who took flu shots were usually avid travellers or those who worked overseas and high risk groups.

Another recurring problem about the flu in the country was that most Malaysians did not want to bear the cost of vaccination while there were also the anti-vaxxers.

Dr Petrick also said the current Influenza antiviral being used in hospitals are only 40 to 60 per cent effective compared to medication like the Roche Malaysia Sdn Bhd’s newly-launched Xofluza (baloxavir marboxil).

Xofluza, which needs to be taken only once, is also designed to attack the source of the virus which reduces the production of the virus within 24 hours.

“In a way what it means for us doctors is that we can probably reduce the chance of transmission of the virus to other people much faster.

“Because if you get influenza, you can pass the virus for seven days or even one day before the symptoms.”

“So, I can be well today, but I can still transmit the virus and only get the symptoms the next day.”