Jochem and Ruben have always had a soft spot for our country and aims to make Malaysia proud with their Wira taxi-racecar. — Picture via Instagram/Dutch DIY Mechanics
Follow us on Instagram, subscribe to our Telegram channel and browser alerts for the latest news you need to know.
By MARK RYAN RAJ

PETALING JAYA, August 7 — It isn't every day that you see a Proton Wira speeding down the chicanes at the world-famous Nurburgring in Germany.

Let alone one that looks exactly like a taxi that you can find here in Malaysia.

Dutch twins Jochem and Ruben Gravemade from Dutch DIY Mechanics decided to make that feat a reality, as the brothers took on the project of creating their very own Proton Wira racecar in full Malaysian taxi specs.

“There are companies that offer programmes where you get to race high-performance cars around the Nurburgring for a couple of hundred Euros called Ring Taxi. So, we decided that we were going to build off that concept of a “ring taxi” and build a proper lookalike taxi,” said Jochem in an interview with Malay Mail.

The 27-year-old who “still has Malaysia in his blood” added that they chose to model their ring taxi after Malaysia’s own Proton Wira, because of the fond memories that they have from their time living here.

🇲🇾 Malaysia now tearing up the Nürburgring 🇲🇾 1st Wira to conquer Nürburgring 1st lap complete 04.07.2020 1st shot after the lap Want to see more action shots? 🔥 Follow us on Instagram and YouTube for the updates.🙌🤙

“We’ve always had a soft spot for Malaysia — and for its cars too. When we thought of this idea to make a ring taxi, Proton Saga and Wira kept coming to mind, because it is such a common and iconic car.

“We thought it would be a nice mesh to bring the Malaysian model into the equation with the playoff of the whole idea of a ring taxi with our Project Proton.”

They stayed in Malaysia because their parents were posted for work in the country.

The brothers currently reside in Germany “about half an hour” away from the Nurburgring, which is perfect for them as they have been in love with the sweet smell of asphalt ever since they were kids racing against each other on the Play Station.

Jochem added that they began “Project Proton”, which was Ruben’s brainchild, on July 5 2019, after purchasing an original Wira 1.3 GL when they found out that Wira’s were available in Germany.

But it wasn’t all smooth sailing for the petrol-heads as that car wasn’t able to be salvaged, and another Wira had to be purchased — this time an Aeroback model. 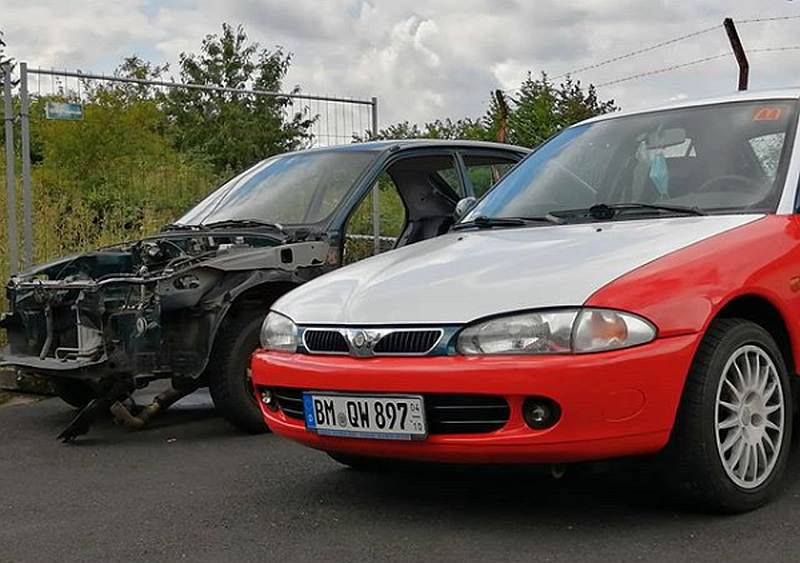 A before and after look of the Wira’s that the brothers bought. — Picture via Instagram/Dutch DIY Mechanics

“It took us about a year to finish the car and we were keeping ourselves busy with the project during the Covid-19 pandemic. When we first bought the car, it was broken. The engine barely ran and we tried to fix it, but it didn’t work,” said Ruben.

“In the end, we found another one and built that up from the ground. We upgraded the brakes, suspension — everything you can think of, we upgraded it.”

Ruben said that he also sought to create a perfect likeness to a Malaysian taxi by outsourcing authentic parts and accessories from Malaysia.

“The colours are correct with the Malaysian taxis now. And we have already found an original taxi meter with the help of a friend in Penang, so we’re going to install that next.”

The Gravmade’s Wira taxi really does look the part too, as the brothers have pulled out all the stops to make the perfect copy of a Malaysian taxi, by even replicating the iconic white and yellow badge on the doors and getting the “Teksi Bermeter” light on top of the car.

Exactly one year on from when they first started the project, the Gravemade brothers finally got to test their tricked out taxi on the iconic Nurburgring circuit in Germany which is nicknamed “The Green Hell.”

“We’ve done about eight laps so far on the track. So that’s about 160 kilometres of racing already and the car did really well,” said Ruben.

“At the beginning, it swayed a lot, but once we upgraded everything it was running perfectly. We even managed to beat a Porsche 911.

“To be fair, I don’t think they were very familiar with the track. But we are going to take all the bragging rights we can get and hopefully make Malaysia proud by beating one Porsche at a time,” he joked.

Ruben added that they are in contact with many Malaysian Wira enthusiasts on social media and plan to use some of their ideas to further upgrade their Wira taxi by first getting a “quicker” Mitsubishi turbo engine.