Tingkat, tiffin and other treasures: A fabulous exhibition at Seven Terraces

GTHH founder Chris Ong holding the two tiffin carriers that held bittersweet memories for him as those belonged to his parents. ― Pix by KE Ooi
Follow us on Instagram, subscribe to our Telegram channel and browser alerts for the latest news you need to know.
By By Opalyn Mok

GEORGE TOWN, July 8 — With all this talk about plastic bags and how they harm the environment, it is hard to imagine there was a time when people used enamel and metal tiffin carriers to carry food.

It can be a wife bringing lunch to her husband at his shop or a generous neighbour sharing her special dishes with her neighbours where different dishes are placed in each layer of the container; these multi-tiered carriers were a common item in most households in Malaysia and throughout Asia. 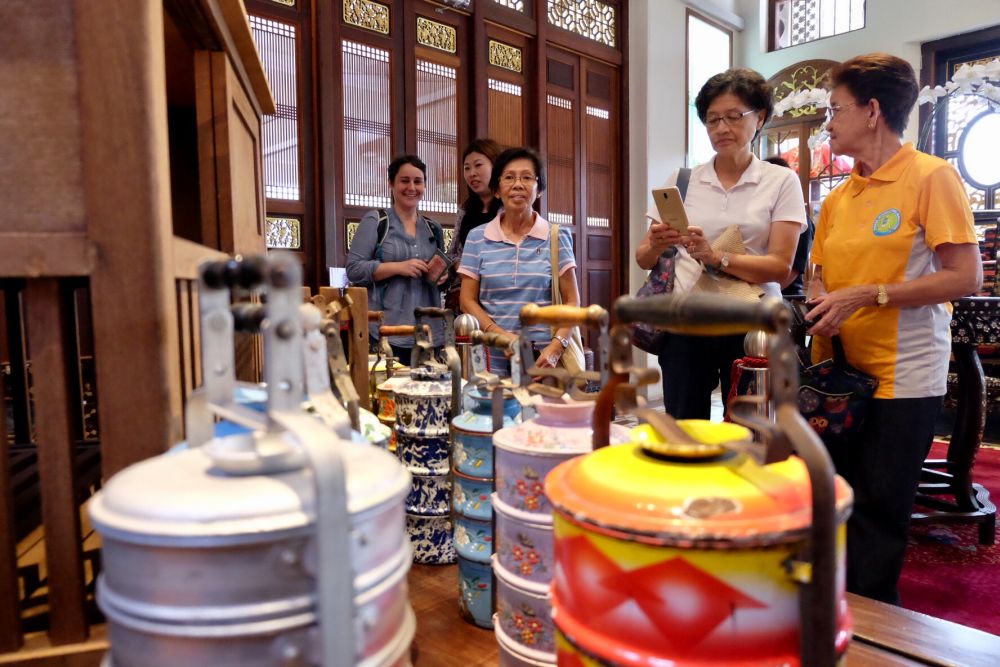 The enameled and metal tiffin carriers showcased in Seven Terraces.

The tiffin carriers are not the only multi-tiered containers that were used back in the day as there was a more delicate version — the porcelain tingkat.

The porcelain tingkat — which literally means levels in Malay — are intricately painted bowls that can be stacked up into tiers with a cover over the top bowl.

According to George Town Heritage and Hotels (GTHH) founder Chris Ong, these porcelain tingkat are from the pre-Peranakan era in the early 19th century. 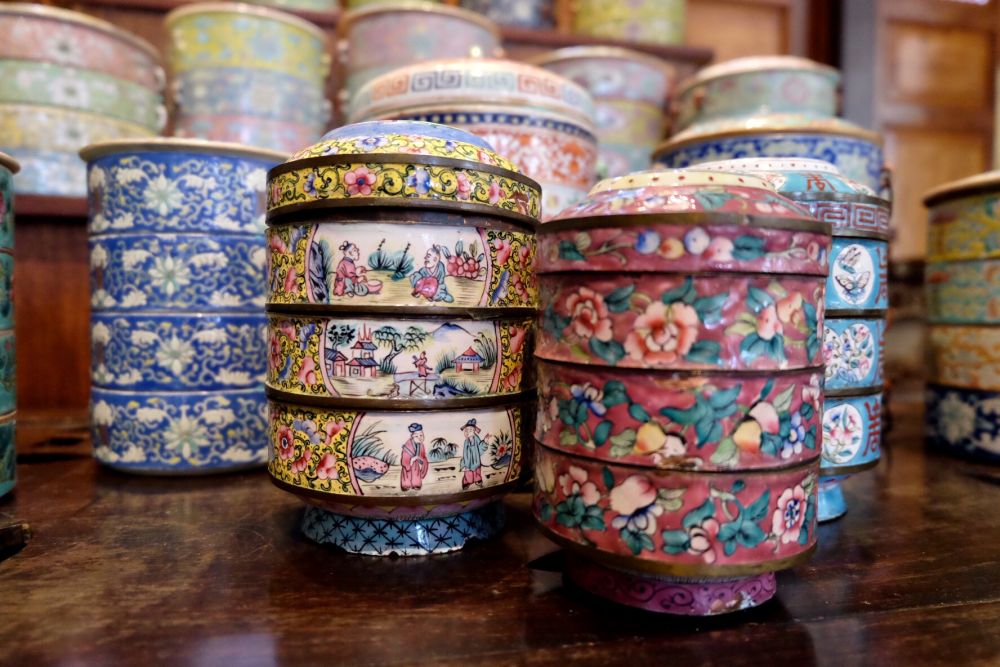 The colourful porcelain tingkat was used to serve food to different quarters in a large communal household.

“The porcelain tingkat traditionally has four layers and in my house, it was used to serve Chinese New Year tidbits such as kuaci (melon seeds) and other treats,” he said.

Unfortunately the tingkat that his family used was lost over the years. 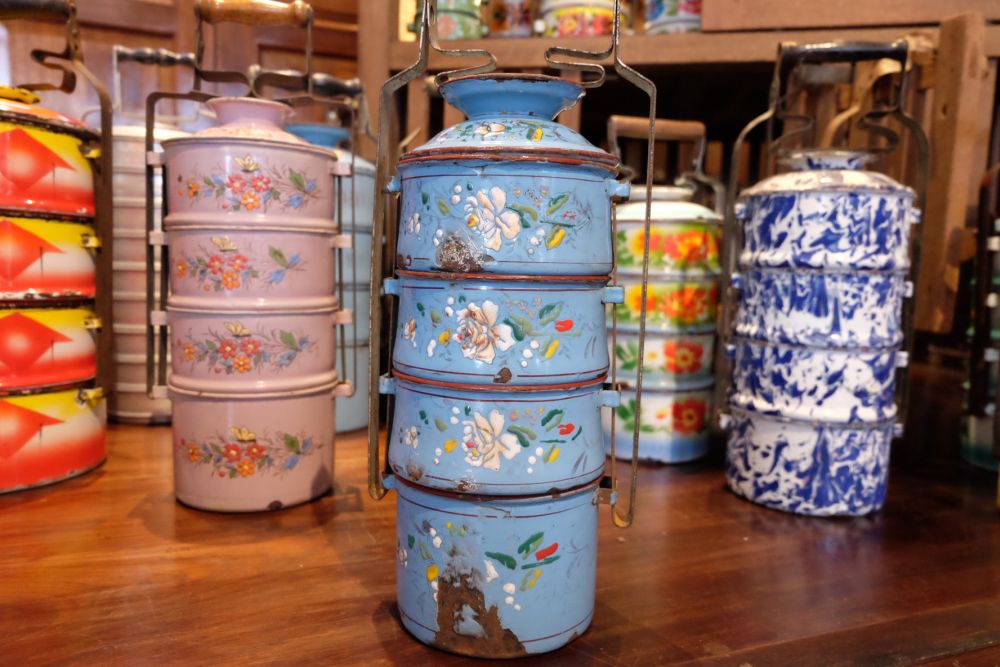 Fascinated by the colours and intricate designs of the tingkat and tiffin carriers, Ong started collecting these as part of his antique collection.

His very first tingkat was a white porcelain one with delicate Japanese-inspired blue flowers painted on it. 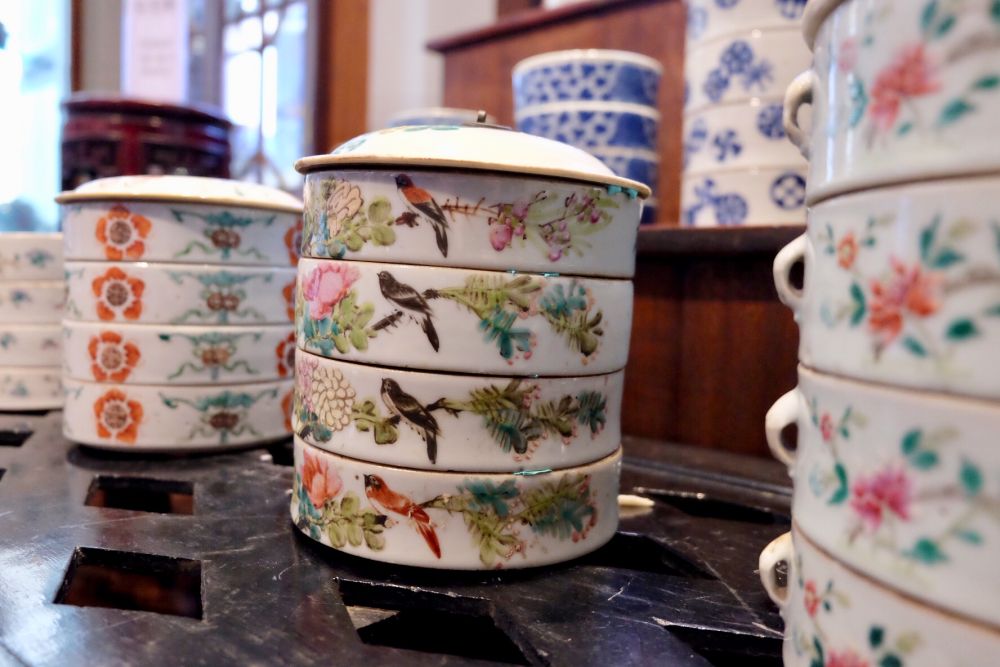 These are Pre-Peranakan era tingkats that we’re used by large Chinese households to serve food to different quarters.

“I bought it in Hong Kong in 1993. It was made in the 1920s in China when the Japanese were there so they had incorporated Japanese designs into it,” he said.

The other tingkat carriers on display were of diverse designs, some are white with flowers and birds painted on them while some are multi-coloured with common floral motifs all over.

Ong said he noticed that the colourful tingkat carriers would often be the same yellow, blue, green and red with similar motifs.

He believes that these decorative porcelain multi-tiered bowls were originally wedding presents from the family.

“In the old days, there was usually one central kitchen and these are used to serve food to different quarters in a large communal household,” he said.

He said food would be served in the tingkat and the rice in a separate wooden container.

Also in Ong’s collection are the more commonly-known enamel or metal tiffin carriers. 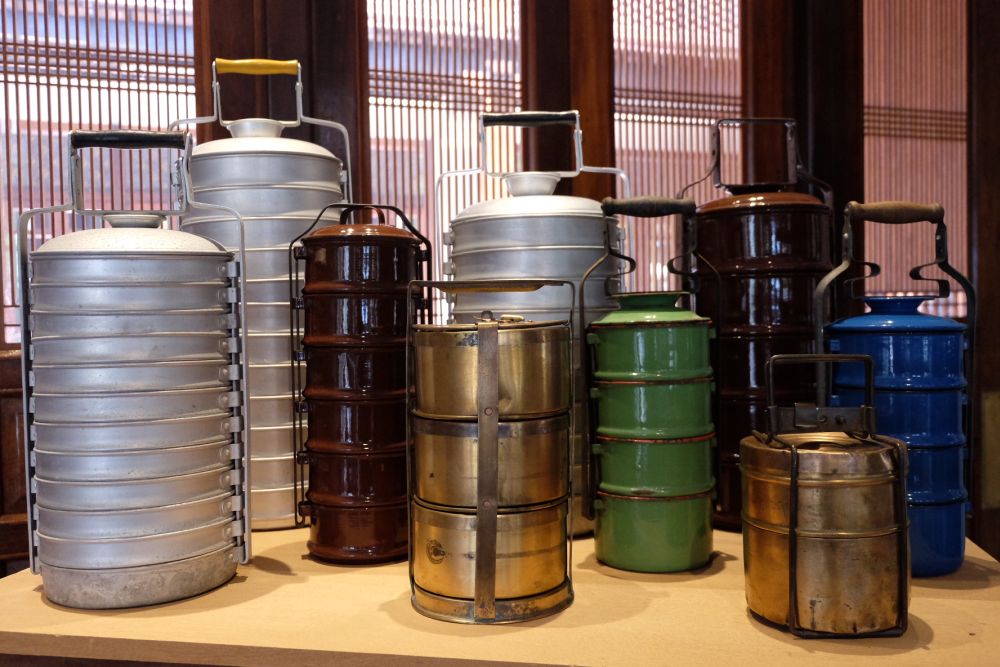 Metal tiffin carriers that were used including those used in India and those used by Chinese households but were made in Eastern Europe.

Two of them — a medium-sized blue one and a small green one — are precious to Ong as they were used by his late parents.

“The small green one was used by my mother to bring lunch to my father at their shop in Penang Road,” he said.

The larger blue one was used by his parents when they ordered catered food back in the 1980s.

“The blue one holds bittersweet memories for me as it reminded me that they had to cater food when I was not around,” he said, referring to a period when he was living overseas.

The tiffin carriers, called u-wah zhan in Hokkien, come in many tiers, unlike the porcelain tingkat.

Some can start with four tiers and go up to 10 or 12 tiers and all have a metal frame to hold the tiers together with a handle on top so it can be taken outside.

Ong said he used to have an aunt who would cook special Nyonya dishes like perut ikan and noodles and use the tiffin carriers to distribute the food to her friends, tier by tier. 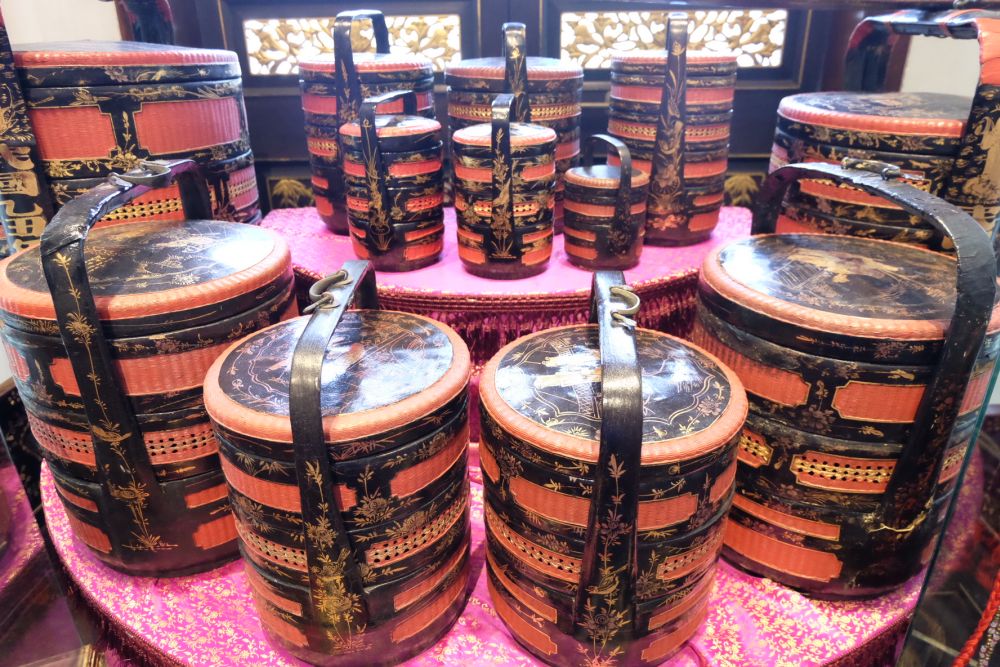 The Hokkien ‘xia na’, or wedding baskets, that were traditionally used to send wedding gifts or dowries. These are also used to bring prayer items and offerings to temples. ― Picture by KE Ooi

Another type of carrier that was commonly used during the Baba Nyonya era is the xia na, the Hokkien wedding basket.

This is the black and red lacquer bamboo basket decorated with gold motifs that was used by families to exchange gifts before the wedding.

Beaded slippers, cakes, jewellery and sometimes, in wealthy families, even title deeds of properties, were included in the layers of the xia na as part of the dowry.

Ong bought his very first xia na with ang pau money he saved when he was 15 years old.

“I saved up about RM200 to buy the basket from an antique dealer in Rope Walk,” he said.

He said in many Peranakan households, the xia na were in very good condition as most are often kept in cloth bags. 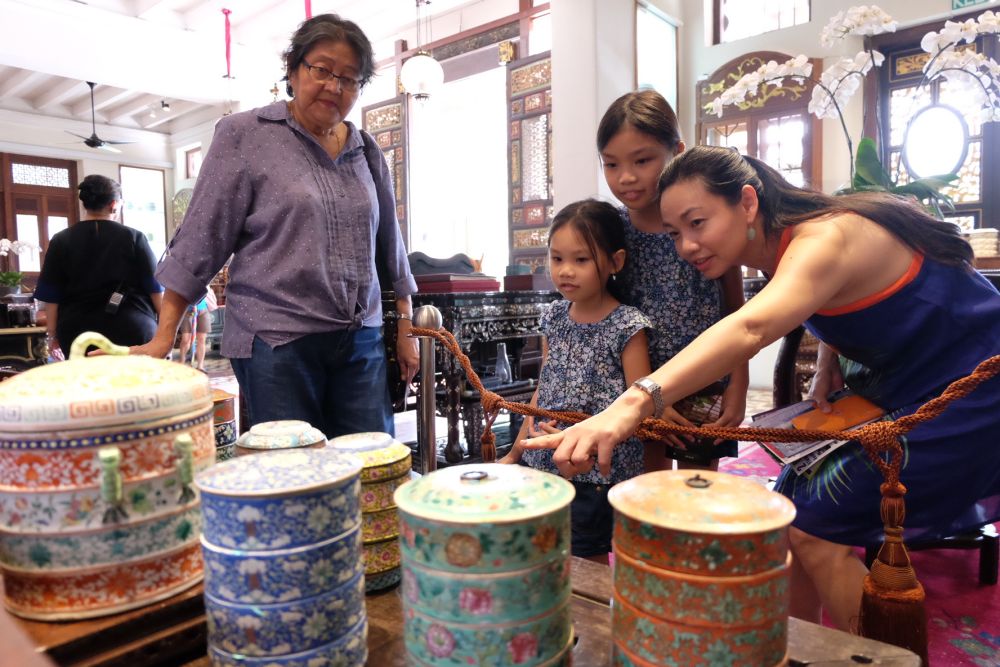 Visitors looking at the colourful porcelain tingkat on display at Seven Terraces.

In conjunction with George Town Heritage Day yesterday, Ong has placed more than 80 of his collection of xia na, tiffin and tingkat carriers at the lobby of Seven Terraces.

The stories behind each type of carrier are in a booklet, copies of which are available for visitors.

The Tingkat, Tiffin Boxes and other Treasures exhibit ends today. It is open to the public and free of charge.

George Town celebrated the 10th anniversary of its inscription as a Unesco World Heritage site yesterday.

Your next fragrance could be made from upcycled elements