Just seeing them stop at one stall after another, gushing over the chewy tteokbokki (simmered rice cakes) or bouncy eomuk (fish cakes) is enough to make one book a flight to Seoul on the spot.

But it’s the steaming vats of tteokbokki that makes me salivate the most: the alarm-red sauce that the vendor will ladle over the cut pieces of rice cakes, fish cakes, boiled eggs and even pan fried dumplings – what’s not to love?

Makes me want to cook something spicy and stew-like too. Spurred on by the jaerae sijang but not beholden to their fare; rather, whatever I have available at home right now, in my fridge, freezer and pantry.

But I don’t want to deal with cooking meat right now.

There are days when I love cooking from scratch; choosing the best cuts for a long simmering stew. These are usually the tougher, less beloved (and more affordable) such as chuck, fatty brisket full of flavour and good ol’ oxtail.

This is not one of those days.

Some weekends feel more like weeknights when you’re not in a hurry but you don’t want to slave over the stove anyway. Ready cooked meat or fish would be a salve.

This is where canned food comes in. I always have a supply of canned fish – sardines, mackerel and tuna – in my kitchen, ready to be deployed at times like this. The sort canned in brine or oil works best; no need for mayonnaise or flavoured oils when you’re going to season the stew your way. 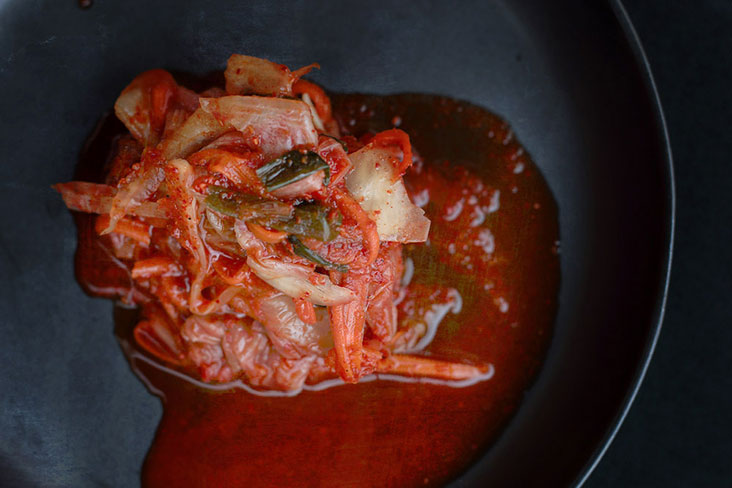 That saves me some time and effort, but where does the Korean inspiration come in? The generous and gratifying use of kimchi, possibly my favourite Korean ingredient.

These fiery-red salted and fermented vegetables – variations include the ubiquitous cabbage and the less known bamboo shoot kimchi – taste so quintessentially Korean that they uplift any dish with their mere presence.

But don’t get me wrong. While kimchi plays a central part in this hodgepodge stew of mine, it’s decidedly non-Korean. I wouldn’t dare lay claim to any degree of authenticity.

Rather, let’s celebrate how, despite how it being not quite Korean, this spicy kimchi-sardine stew is “Seoul-ful” all the same. (Yes, I went there. Dad jokes are part of every Weekend Kitchen experience.) 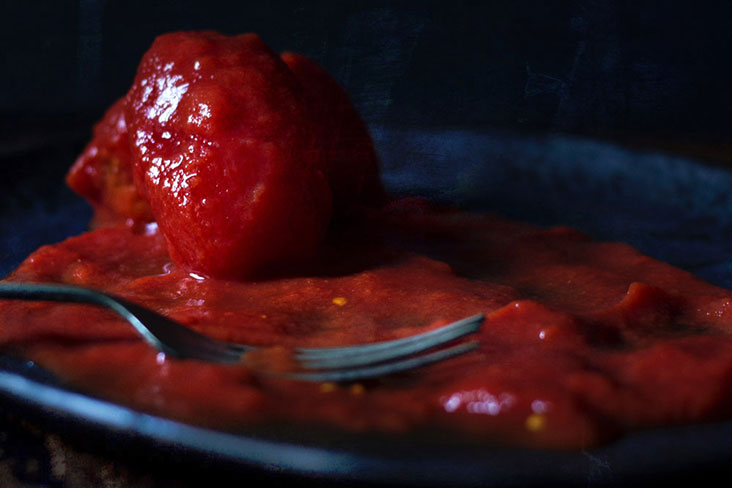 Use canned tomatoes, not fresh ones, as they provide a more concentrated flavour.

The other half of the flavour base comes from tomatoes. Here, I use canned tomatoes, not fresh ones, as they provide a more concentrated taste.

To round up the flavours of the kimchi-tomato base, we’ll include some onions for aromatics and sweetness (sweated so they become translucent rather than caramelised for colour). Then some fresh red chillies for some requisite kick. 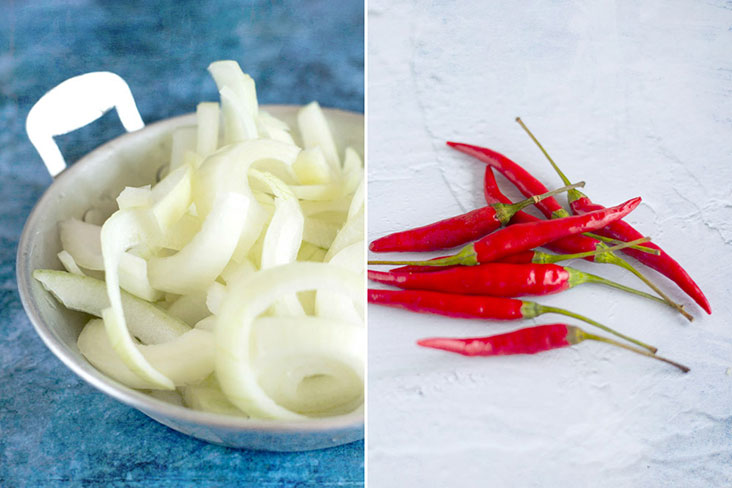 Onions for aromatics (left) and chillies for heat (right).

Layer the heat and Korean influence with some gochujang, a spicy-sweet red chilli paste made from gochu-garu (Korean chilli powder), glutinous rice and fermented soybeans. This goes better with freshly sliced red chillies than you might imagine.

Let your soul soar with this “Seoul-ful” kimchi-sardine stew. And, depending on your spice tolerance, your sinuses might “serenade” too...

The kimchi is a must, but if you can’t find gochujang, try any red chilli paste you have handy in your pantry. I have used sambal and even prik gaeng ped (Thai red curry paste) in the paste, but the taste will change considerably too.

Given the hodgepodge nature of this stew, this might not be a deal breaker; in fact, it might confer some variety should you choose to repeat this recipe frequently. (I hope you do!)

To bulk up your stew, feel free to add some beans (I like pale and creamy cannellini that are milder and won’t compete with the other flavours of the stew) or even some leftover cooked rice. 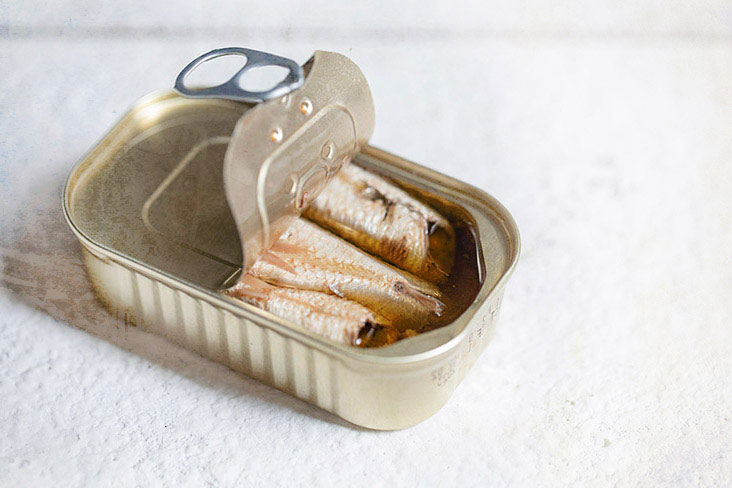 Add the canned sardines in towards the end as these are already cooked.

Timing is crucial here, even with the speed of cooking. Add the canned sardines in towards the end as these are already cooked. A spoonful of miso or doenjang (Korean fermented soybean paste) deepens the umami flavours but these are also better stirred in after you’ve turned off the heat. 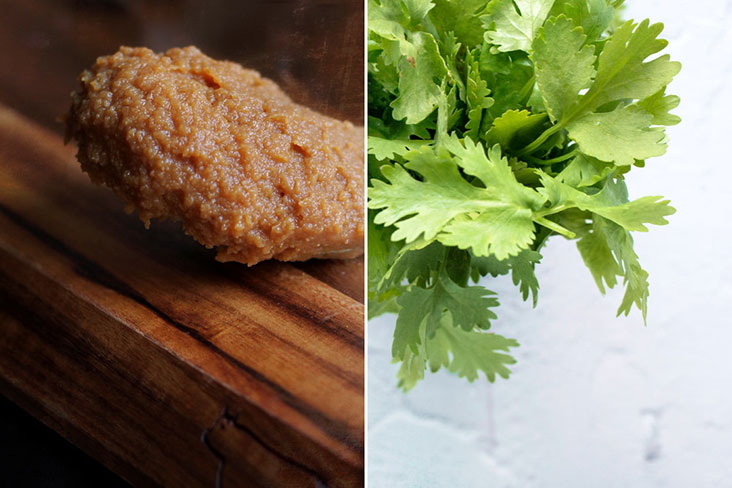 A spoonful of miso or 'doenjang' deepens the umami flavours (left). Garnish with some cilantro (right).

I have chosen to finish this dish with a garnish of fresh cilantro, the green leaves contrasting beautifully with the red of the stew.

If you have some handy, however, a sprinkling of toasted white sesame seeds would add a lovely nutty note. Besides being common in Chinese cuisine, it’s also a staple of Korean dishes where it is frequently used as a garnish.

1 can tomatoes, whole or diced

Salt and pepper to taste

Heat the oil in a large pan or pot over medium-high heat. Add the diced onion. Sauté until translucent, not browned. Add the sliced red chillies, and continue to stir fry till you smell the spicy aroma.

Add the sliced kimchi, canned tomatoes and gochujang. Stir to combine, breaking up the pieces of tomatoes if need be. Reduce heat and allow to simmer for about 12-15 minutes.

Once the liquid has reduced (more of a stew-like gravy than soupy), add the sardines. Using your spatula, break the sardines into bite-sized chunks. (If you’re including beans or rice, you can add those at this stage.)

Once the sardines have been sufficiently warmed in the pot, turn off the heat and add a spoonful of miso or doenjang. Stir until it has dissolved and is well combined with the rest of the stew. Taste, then adjust seasoning with salt and pepper, if necessary.