PENANG, March 1 — When we were young, many of us remember how our very Asian parents would advise us to choose a sensible profession and embark on a successful career path. Very few of us, I reckon, would have heard the words, “Just pursue your passion.”

So it was with Alex Kwan, the founder of GYO Pudding, a Penang-based crafter of Japanese style puddings. The 33-year-old remembers heading to Tokyo to study when she was only 18, following a well-trodden path.

She shares, “I was a science student, and by the time I had to choose my major, I knew I wanted to do nothing with physics, and hence Business and Commerce seemed like a safe choice.”

At the end of her Japanese course, Kwan had a discussion with her teacher about her future goals. She recalls, “I said I’d like to have my own tiny little café or bakery, serving some homemade heartwarming desserts and providing a sanctuary for those who want someone to listen to them.”

Of course, like so many of us, Kwan didn’t pursue her passion, at least not immediately. 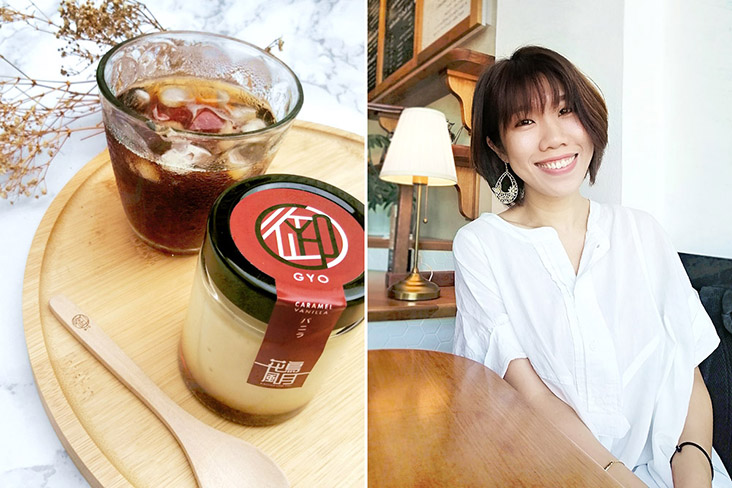 GYO Pudding founder Alex Kwan has a deep love for Japanese culture, having lived and studied in Tokyo.

After graduating, she returned to Malaysia and joined the rat race, working at an F&B (food and beverage) related startup company in KL before moving to Penang.

Kwan says, “Things have been quite chill here in Penang. I was working as a freelance Japanese tutor while helping a local startup project when the pandemic hit. I had a lot of time to spend at home, and that was when I decided to fix my craving for puddings — which is a comfort dessert back in Japan — as I could not find it here.”

Less than a year later, that chance decision has produced a range of thick and creamy Japanese style puddings. Made with no preservatives, Kwan’s puddings taste less sweet compared to other puddings in the market.

GYO Pudding’s signature product is the refined Vanilla with Bittersweet Caramel where the lightly toasted bitter caramel complements the sweetness of the pudding infused with real vanilla seeds. (Kwan also has a Classic Vanilla flavour where the caramel is omitted.)

For lovers of green tea, there is the Premium Matcha, made from import-grade matcha and brown sugar, as well as the Hojicha pudding that retains the distinctive smoky aroma of roasted green tea. Those who favour chocolate and coffee can choose the no-sugar-added Rich Dark Chocolate or the Penang Kopi, a fun twist with our local Malaysian kopitiam cuppa. 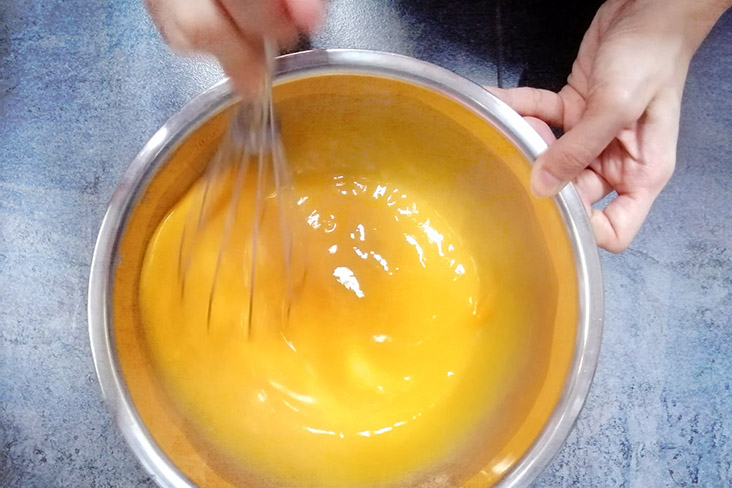 Whisking the eggs to make the custard.

Though not a professional pâtissier, Kwan credits her sweet tooth and plenty of support from close friends — many of them Japanese expatriates residing in Malaysia – for her successful product launch.

She says, “Their feedback gave me encouragement. After researching in the market, I found there is a little gap that I can fill, and that is when I decided to turn this into a full-time business. Looking back, that might have been the realisation of my 18-year-old self’s dream.”

At first glance though, many would-be customers would consider GYO Pudding’s offerings as mere bottled custard or flan. Perhaps the closest cousin would be crème caramel (something Ipohans might find both familiar and nostalgic, having savoured it at their local kopitiams during their childhoods).

To differentiate her puddings from such similar desserts (not to mention our soy milk based tau foo fa), Kwan emphasised the term “Japanese” to the extent of giving her product a Japanese name.

She explains, “I want this to be an exquisite product, and the term 御 (pronounced as gi-oh), has the same kanji as the Chinese character, which means ‘imperial’.” 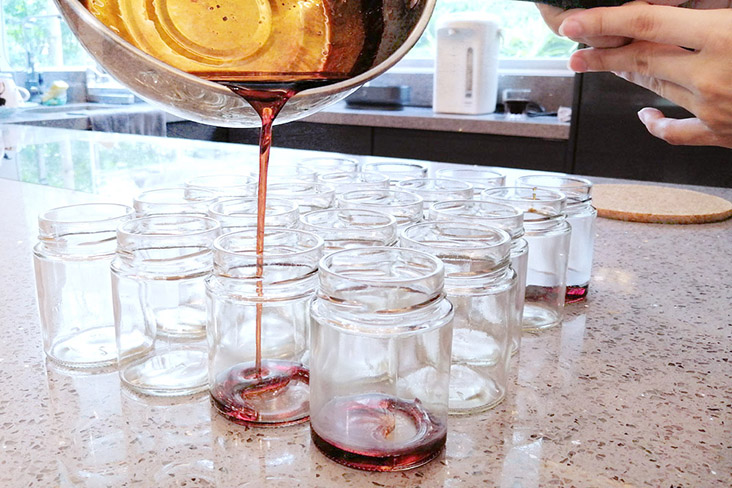 GYO Pudding’s products are aimed to suit all ages, with its not-too-sweet taste and soft texture. Kwan further clarifies: “Even in Japan there are two types of puddings – one that is bouncy and jelly like, and another usually found in dairy farms, which generally has a heavier milk taste. GYO puddings belong to the latter category, and therefore is also creamier and richer.”

Incorporating Japanese aesthetics into her products is another way Kwan is living her Tokyo dreams. She observes that this covers both the flavours and packaging of her products: “We use a glass bottle instead of plastic despite a much higher cost. I want GYO Pudding to be more than just a dessert; it is a gift, something that excites you the moment you receive it.”

Part of that excitement, for Kwan at least, comes from learning how to run a business from scratch. The first six months were particularly hectic. She recalls, “From sourcing, baking, designing to marketing, selling, delivering and after sales service, it was all a one man show.”

One early decision that paid off was participating in a weekly pop up market at Hin Bus Depot. She says, “I think for every business, apart from your product quality, it comes down to your engagement with your customers. That market provided me with a lot of first-hand feedback, and from there, I got a lot of return customers.”

However, due to the lockdown, Kwan had to shift her business to a largely online presence. She says, “Most of the orders were communicated via social media, and fulfilled by third party logistics. It was tough at first. But as I ran my business as a lean operation, I had more time to focus on customer service and product R&D – so slowly it started to pick up again.” 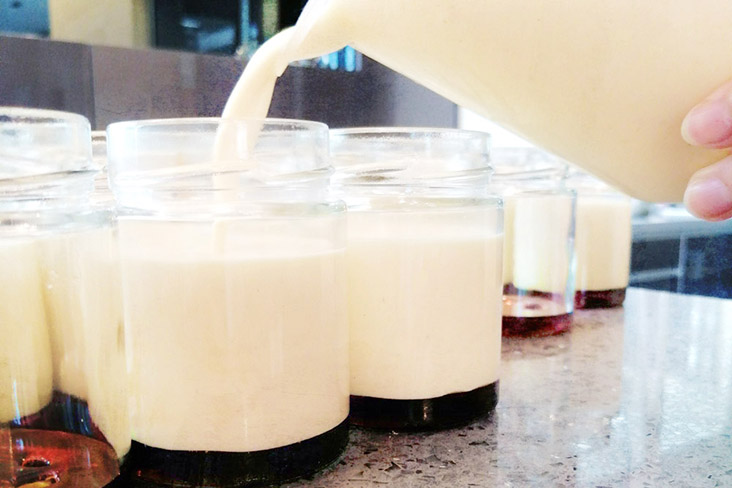 Topping each jar with the custard, infused with real vanilla seeds.

Many newbie entrepreneurs try and do everything — partly due to budgetary constraints, partly to maintain control. Bucking this trend, Kwan believes in delegating where possible, to better focus on her key strengths.

She explains, “I recognised that online advertising and marketing to end consumers is not really my forte. Hence I am planning to outsource this part to professionals, to mainly grow my B2C (business-to-consumer) sales.”

On the flip side, Kwan intends to grow the B2B (business-to- business) segment of her market. She had already approached some Japanese restaurants and bakeries towards the end of the lockdown last year, and began supplying them with her products.

“I definitely see the potential of B2B,” Kwan says. “With the right collaboration, I think this will be an excellent exposure and education to the mass consumers too. Just very recently, I started to explore the KL market; I ship my products to KL once every two weeks for now.”

Having completed her first physical showcase at a Christmas pop-up last year, Kwan plans to organise more collaborations with cafés, restaurants and handcraft vendors in both Penang and KL. She adds, “Hopefully I can assemble a team soon to serve more customers.” 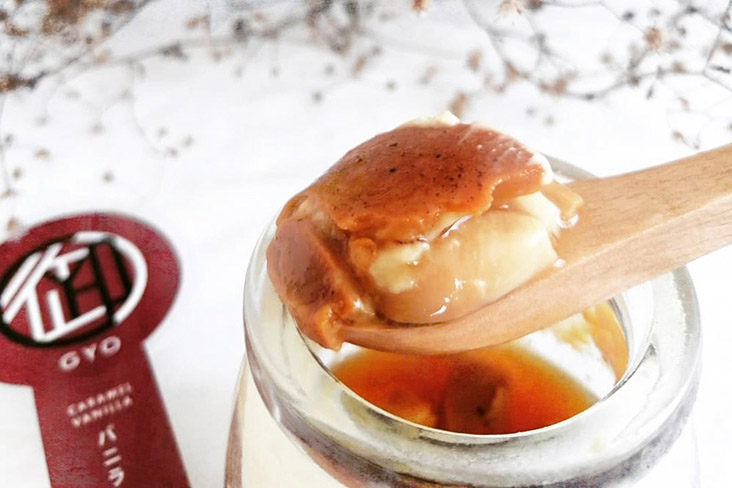 The resulting Japanese style pudding is creamier and richer than ordinary custard.

Kwan has certainly come a long way from her days as a student in Tokyo (no pun intended). Which goes to show how pursuing one’s passion can offer one a new lease on life — with a new product, a new business and a new way to deliver joy to others, one spoonful at a time.