A South Indian feast – ‘spiced the Malaysian way’ – awaits at PJ’s Kadei by Manchula, even on Deepavali!

PETALING JAYA, Nov 4 — Stacks of delicate appam. Stir fried snake gourd with dal, mustard seeds and dried chillies. And best of all, nasi lemak, with a choice of sambal prawns, sotong or irresistible mutton varuval. Wouldn’t your mouth water too?

They say that nothing tastes quite as good as mum’s cooking and Suresh Gnanasekaran will be the first to agree.

The affable 38-year-old is the co-founder of Kadei by Manchula in Taman Megah, PJ; the restaurant focuses on South Indian cuisine “spiced the Malaysian way” which has meant it has attracted fans from all walks of life.

And no one is a bigger fan of his mother’s cooking — “Auntie Manchula” to family, friends and the shop’s regular customers — than Suresh.

He shares, “Even when we would eat out (which is not often), Mum would make her own rendition of it — from assam fish to yam basket with curried vegetables — at home which we always liked more!

"She never stopped learning, and remember, this was before we had smartphones or YouTube recipes. I guess she just wanted to be known as the best chef in our eyes.”

Suresh was born in Malaysia to second generation Indians; his family moved to Chennai when he was only three as his father started a business there. They would spend almost a decade in India before returning to Malaysia when he was 12. 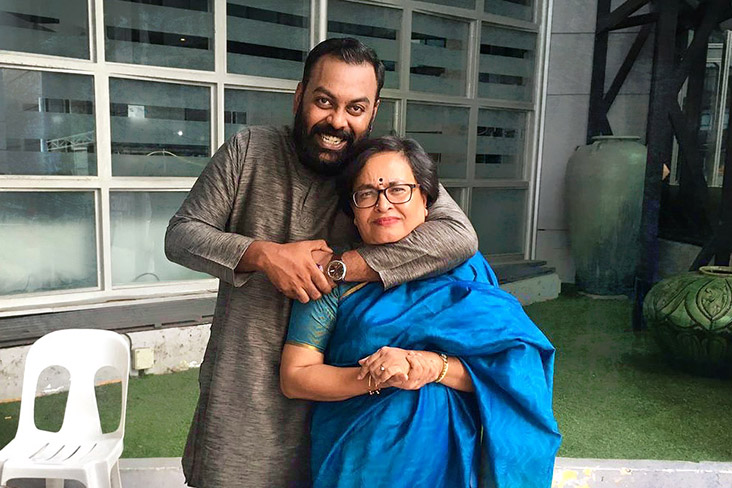 That formative period meant Suresh grew up tasting a wide variety of Indian dishes, honing his keen palate. He adds, “My dad and his brothers were also frozen food and meat wholesalers. They imported halal frozen lamb, beef, buffalo meat from Australia and New Zealand. So we had the absolute combo of an amazing cook and an endless supply of great produce at home.”

While completing his degree in marketing and international trade, the untimely passing of Suresh’s father meant the then 19-year-old had to shoulder the responsibility of the family business. It was challenging, to say the least.

He recalls, “That experience allowed me to see behind the scenes of the food industry all the way from the importers to the restaurateurs. I used to deliver meat to some of the top restaurant chains in town. I learned so much about how these people worked and also met some great ‘teachers’ along the way.”

These early lessons would prove instrumental for Suresh in his journey as a food entrepreneur. Growing up in a family that was passionate about food, he also observed how his mother was always the heart and soul of cooking.

He recalls, “Throughout years of feeding her friends and family, the feedback was the singular ‘you need to open a restaurant to share this with the world!’” 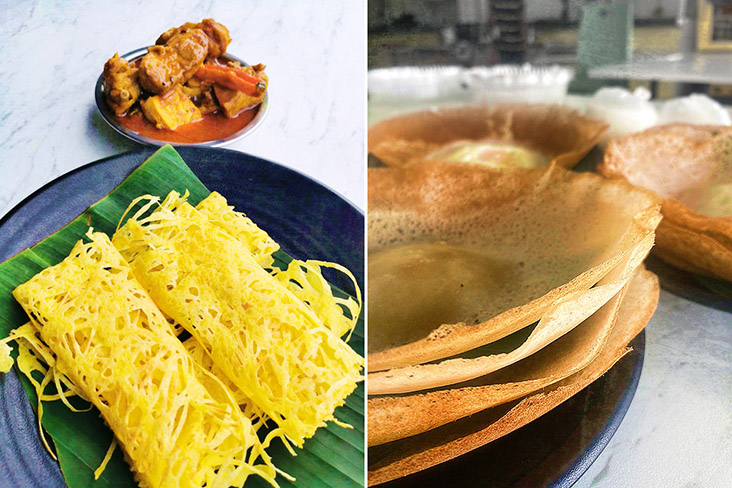 Such encouragement led the mother-and-son duo to take that a great leap of faith and open their first restaurant, Aunty Manju’s, at Taman Tun Dr Ismail in October 2015. The banana leaf rice shop was a hit, but Suresh wanted to do something different for his next venture.

Which is where Kadei’s memorable tag line — “Spiced the Malaysian way” — comes in. Not only does this catchphrase encapsulate the way their food, based largely on South Indian cuisine, is cooked, but also the labour of love that goes into cooking the “Malaysian way” and the bonds Suresh hopes all of us can form over food.

Walk into Kadei, and you will come across familiar dishes given their “spiced the Malaysian way” special touch: from mutton rendang and sambal prawns to kicap fish and roti jala and chicken masala.

Customer favourites include Kadei’s “Curry Gearbox Kambing” (which is their take on mutton bone marrow curry and their tangy Mango Fish Curry (Auntie Manchula’s version of assam fish). The appeal of these dishes lies in the fact they remain familiar despite minor adjustments here and there. 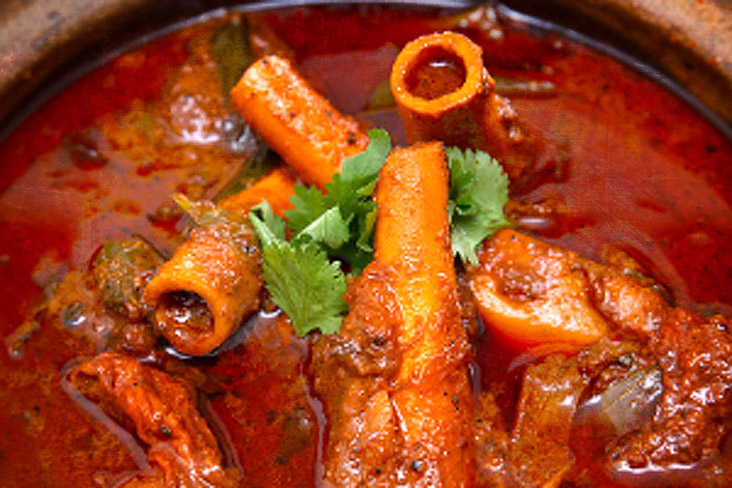 Or as Suresh puts it: “At Kadei, we are serving you food the way I grew up having them. A great example is how we do not use any cardamom in our cooking. It’s purely because no one at home liked the medicine-y taste that completely covers your mouth if you ter-bite into one of these pods.”

That might surprise many diners as cardamom is one of the more important spices in Indian cuisine. On the flip side, Kadei uses pandan heavily despite these fragrant leaves not commonly featured in Indian menus.

Then, there are the unexpected hits such as their Chilli Crab Menu released in the midst of one of the lockdowns; a special takeaway/delivery treat for those stuck at home.

Suresh shares, “We made our rendition of Spicy Chilly Sri Lankan Crabs that sent our customers into a frenzy! We used belacan, dried shrimps and serai, and also ketam nipah, so our Malay customers could enjoy this dish as well. People absolutely loved the spicy sambal in which the crabs were cooked.” Trays of spicy chilli crabs, made with 'ketam nipah.'

Despite having been in the F&B (food and beverage) industry for more than 20 years, nothing prepared Suresh for how badly affected they would be by the pandemic. He shares, “We started Kadei just before the first lockdown in March 2020. Imagine starting a new restaurant and not being able to open for months on end!”

Being a brand new restaurant meant Kadei didn’t begin with a cadre of regular customers who have had a chance to try their food. It was a struggle for the team to keep the lights on, but they persisted by pivoting to online deliveries and even taking direct orders through WhatsApp.

Suresh says, “If there is a lesson I’ve taken away from managing Kadei during this period, it’s to be brave to make changes. Now as things are improving, we are excited to have in-store dining. While some customers are still wary, they have mentioned that they feel comfortable to dine here as it is spacious and well ventilated with fully vaccinated staff.”

While older restaurants that have been around for years (some for decades) have struggled to adjust to the vagaries of the various lockdowns, Kadei’s relative “youth” turned out to be a blessing in disguise.

As Suresh puts it, “Ninety per cent of our existence was during the pandemic. To grab attention, we had to vary our menus specifically for delivery. We asked ourselves the hard question, would people enjoy a banana leaf rice (BLR) meal delivered to their homes? Personally eating BLR is an experience best enjoyed dining in.”

Given their own preferences, they came up with modified dishes such as their Nasi Lemak Prawn Sambal with Steamed Egg. Here, they took a Malaysian staple and put their own spin on it by cooking the prawn sambal in cili boh with Indian spices. 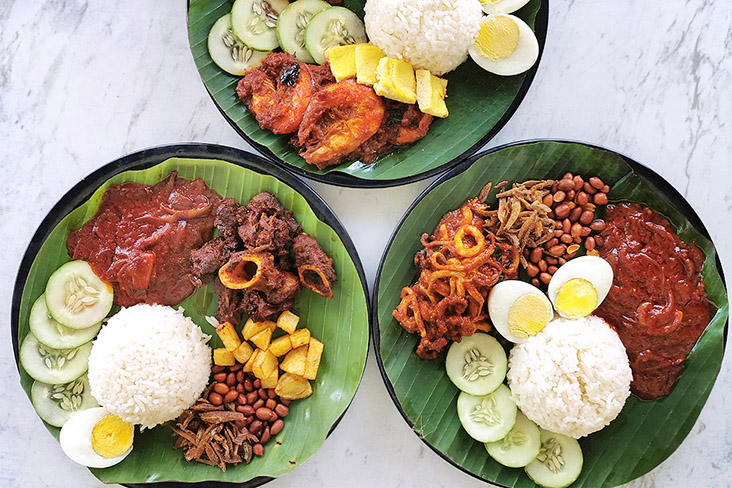 But the unexpected star of the pandemic period was Kadei’s nasi kandar. It began with Suresh finding the curry overpowering each time he had nasi kandar; he felt that such strong flavours took away the taste of the fried chicken and the freshness of the okra and the green chillies.

A tweak could be just what was required, Suresh reasoned: “Since we do not serve beef at Kadei, we replaced the kicap daging and make our own style of kuah kicap and also add on egg kurma in our kari campur (mixed curries). The nasi kandar is made complete with our signature Kadei Fried Chicken or if you want something fiery, my mum’s infamous mutton varuval.” 'Nasi kandar ayam' is a feast in itself.

Deepavali is a holy time of year for our Hindu friends, and those who celebrate it find special joys in their own way. Suresh quips, “I always joke that I celebrate Deepavali twice, one with family and one with customers! Deepavali at Kadei is always exciting as I get to see friends and families come decked out in traditional wear to celebrate the special day with us. And it would not be Deepavali without mutton.”

Indeed mutton lovers will find much to rejoice as Kadei is open on Deepavali until November 7 (Sunday) and will be offering their wide range of mutton dishes such as their bone marrow curry and kurma, mutton varuval and deep fried mutton chops. 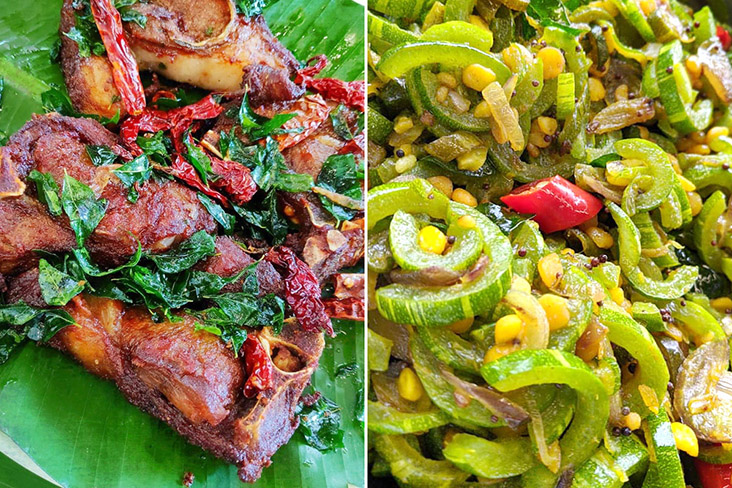 Suresh adds, “All are made with 100 per cent pure Australian halal mutton. For the non-meat eaters, not to worry we have our signature mango fish curry cooked with fresh green sour mangos, bayam dal and an assortment of vegetables. So please come by!”

With a welcoming invitation like that, who could say no? Happy Deepavali, everyone! Have a blessed day and be well always.