'We miss you' tiramisù, and that rare taste of belonging

KUALA LUMPUR, April 3 — It’s Easter weekend. The time of year I often think of my Italian friends for some reason. I think about tiramisù, suffused with sweet Marsala.

Perhaps it’s the trips to Milan when university students were on their break so it was quieter (though by Italian measure, that’s hardly solitude). No fashionistas — it wasn’t Fashion Week — and this was long ago that there were fewer busloads of tourists, though these days those feel almost like a memory now.

(Many things are just memories now.)

Perhaps it’s staying at my friend Manuel’s family home in Trento where his family, the Mazzas, welcomed me like one of them. The astonishment when his brother-in-law gave me a peck on my cheek, then repeated it thrice, alternating between left and right.

Manuel told me later wryly later that two pecks is compulsory, three pecks for friends, four pecks for family. You could have warned me, I told him. His retort: Ah, but then I wouldn’t get to see that look on your face.

(Many things are just memories now, but they are fine, fine ones.) 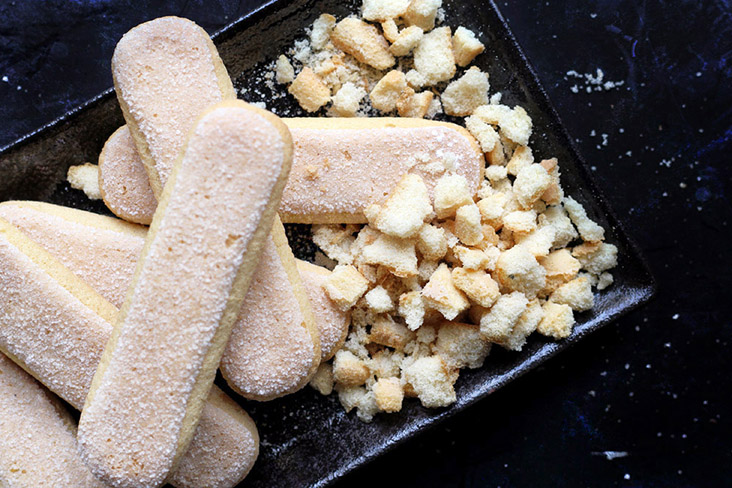 Ladyfingers are a type of dry, sweet Boudoir Biscuits.

Perhaps I think about Italy whenever Easter comes around because I remember their sombre and beautiful Mass at church on Sundays. It doesn’t matter if it’s an architectural wonder that receives swarms of photo-taking visitors on weekdays or a humble village church where everyone knows everyone else.

Manuel must have brought me by his town’s church the first time I visited; we probably didn’t go in and headed to the supermarket to buy supplies – pasta (rows of iconic blue boxes with hundreds of different shapes, more than ought to be possible), fresh mozzarella, canned tomatoes (but only the good stuff) — before heading back to cook dinner.

The Mazzas relished cooking and good food, and the men fared as well as the women. This is a nation of #Foodies before that was even an Insta-friendly hashtag.

It was probably a year later when I returned to Trento and this time I did go to church. It was a special Mass for the Mazzas as Manuel’s father had just passed away the month before. Sudden, sad, shocking.

Yet life goes on. (Life did go on, though we never imagine it when stuck by tragedy and engulfed in grief.)

I heard plenty of “Ti amo” that weekend. I love you. And variations on “Ci manchi.” We miss you. 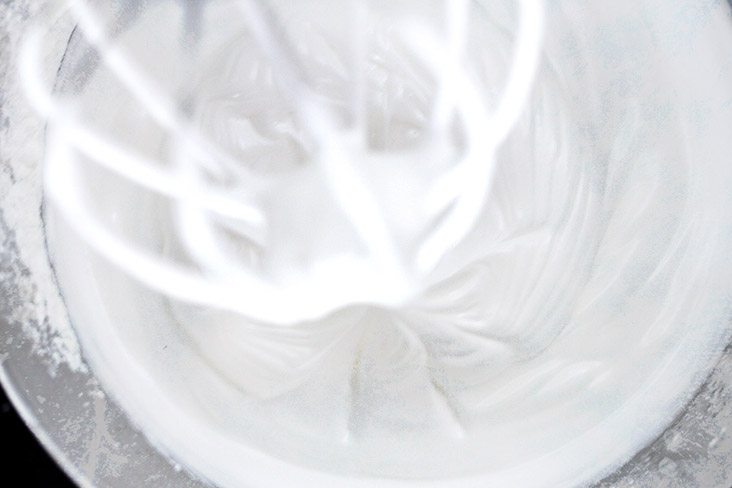 Whip the ingredients until the mixture forms stiff peaks.

I remember gathering in the square outside the church afterwards while we waited for the entire family to assemble. One of the village children came over, a small boy, maybe seven or eight, recognising Manuel. He had never seen a non-Italian before, much less an Asian, and asked Manuel innocently if I was Italian, if I was one of them.

Manuel heroically replied in Italian (he translated for me afterwards): Of course he’s one of us.

It’s Easter weekend. The past weeks have seen my Asian American friends receiving some bitter consolation that anti-Asian sentiment in the country they call home is finally getting called out. Like a bully in the school yard finally confronted.

I cannot imagine, I cannot fathom, growing up in a place where you are told and shown every day that: Of course you’re NOT one of us.

It’s not fair to compare, you say; things are different now. But memories aren’t fair; they just are.

And as the French say, Plus ça change, plus c'est la même chose. The more things change, the more they stay the same. 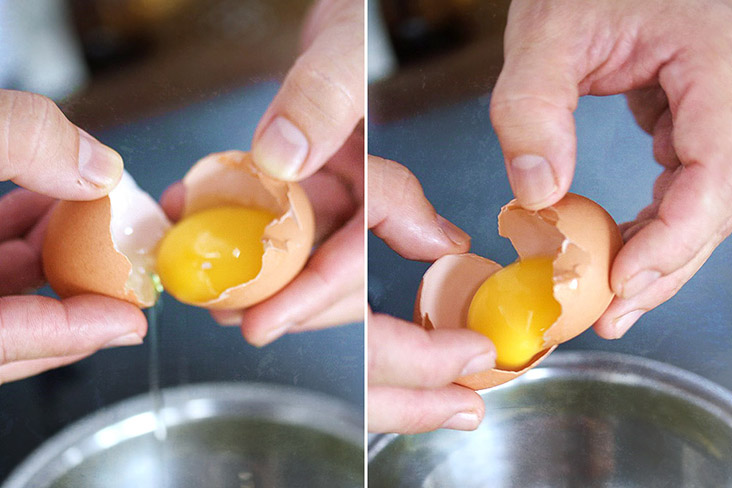 Separate the egg yolks from the whites.

It’s Easter weekend. This time of year I think of my Italian friends, of Manuel and his lovely family. I think about the homemade tiramisù his mother made the day before and that we had for dessert after Mass, suffused with sweet Marsala and full of love and acceptance.

We remembered Manuel’s late father and they shared rousing tales of the Italian patriarch's younger days, coming to the North from the South, encountering bigotry and overcoming it his way. The taste of tiramisù will always be “We miss you.”

We shared a meal and found in each other, no matter the difference in skin colour or language spoken, a fellow human and a family member. With the filthiest jokes and peals of laughter (because, life does go on), we hollered it from the rooftops: Of course you’re one of us!

‘WE MISS YOU’ TIRAMISÙ

This recipe is inspired by the tiramisù made by my friend Wayne Zanussi, an avid home chef. He is an Australian of Italian descent, so of course he learnt cooking from his Mamma. (Lucky us, the beneficiaries of his culinary efforts. Or guinea pigs, as he calls us.) 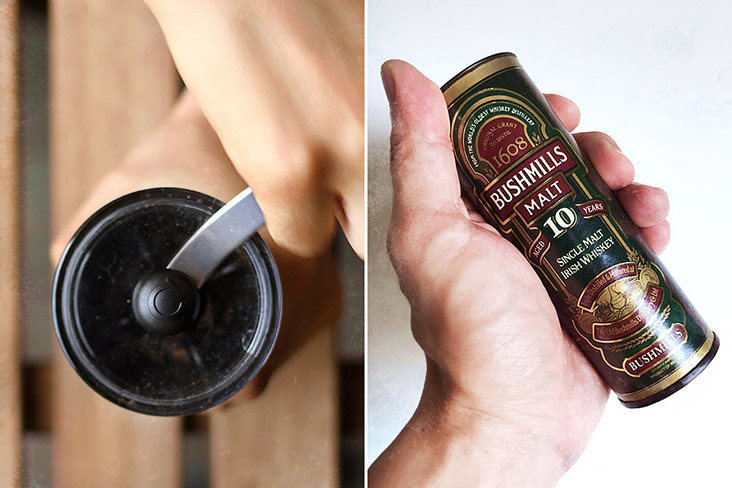 Grinding coffee beans for filter coffee instead of espresso (left) and a dash of whiskey (right).

Wayne — who had previously shared his recipes for hummus, salmon with couscous, as well as his favourite dessert, the very sweet and very addictive baklava — showed me that ugly is often better where tiramisù is concerned.

It’s humble fare, after all. It doesn’t have to be fancy. Italians just scoop the dessert from large, deep dishes. Scoop it or slice it, it simply needs to taste good.

My take is also inspired by the versions at Front Room & The Kneady Baker in KL (their tiramisù is soaked in whiskey, which suits my palate better than sweeter liquors) and Some Time Blue in Bangkok (the café is famous for their single origin coffee and filter brews).

As we aren’t using shots of espresso (as “proper” tiramisù recipes would insist on), the end result will always taste different. But let’s play and have fun. (Hopefully Italian friends will forgive me.) 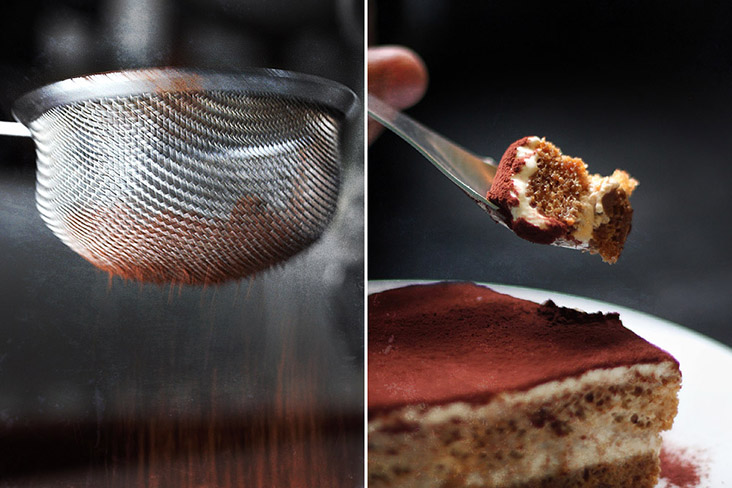 Here I’m using filter coffee (brewed ahead of time using your method of choice, then chilled for a few hours or overnight) but an equivalent amount of instant coffee or espresso from a capsule machine would work too. Experiment and adjust as desired.

For the whiskey, it’s a small bottle of aged single malt Irish whiskey that I got from a distillery tour some years ago (which may horrify or delight connoisseurs). Use whatever you have or prefer.

First separate the eggs into egg yolks and whites, placing them in different mixing bowls.

In the bowl with the egg yolks, add the mascarpone, heavy cream, sugar and vanilla extract. Whip all these ingredients until the mixture forms stiff peaks.

In the second bowl with the egg whites, beat the whites until they too form fairly stiff peaks. Gently fold this into the mascarpone cream in the first bowl.

Next pour the coffee and whiskey into a shallow dish and gently stir to combine. This will be our soaking liquid.

Prepare a rectangular pan large enough to fit all the ladyfingers and mascarpone cream. The shape of the pan will also determine the final shape of our tiramisù. 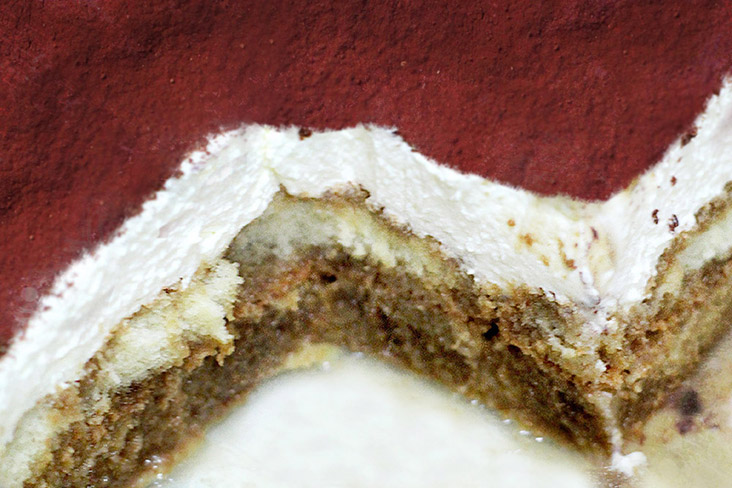 Scoop it or slice it, tiramisù simply needs to taste good.

Lightly dip each ladyfinger into coffee and whiskey mixture; just a few brief seconds else they will become too soggy. Place them on the bottom of the pan, forming a single layer.

Dust with a thin coating of cocoa powder. Use a sieve so that the cocoa powder falls evenly on the mascarpone layer.

Repeat the layers — soaked ladyfingers, mascarpone cream, cocoa powder — until everything is used up. Depending on the dimensions of your pan, this could be 2-3 layers of each.

Cover with a lid or cling wrap. Allow to chill in the fridge for at least six hours or overnight. Right before serving, dust again with a fresh coating of cocoa powder. Scoop or slice as desired.