Have an ‘imperial banquet’ at home with this simple superior stock

KUALA LUMPUR, March 27 — Ho-hum. That’s the feeling we all get eventually if we are spending plenty of time at home and the dishes we cook begin to go on repeat.

Sure, there is always delivery — but there is something extra special when you make your own food. Even with new recipes to try, after a while the flavours seem to revolve around a limited range. Everything tastes sort of the same.

There is a missing spark.

We fantasise about the times when we had lavish celebrations, when we attended raucous banquets with exquisite dishes rolled out, one after the other, course after course.

Why do those dishes linger in our memories, why do we long for something words can’t describe but our taste buds surely recognise?

The secret lies in the stock, in the long hours of simmering, of bones and meat and more, relinquishing their precious flavours and nutrients, melding together into some mysterious manna of deliciousness.

And no, we don’t have to wait for our next visit to some fancy restaurant to taste this — believe it or not, we can make it at home! 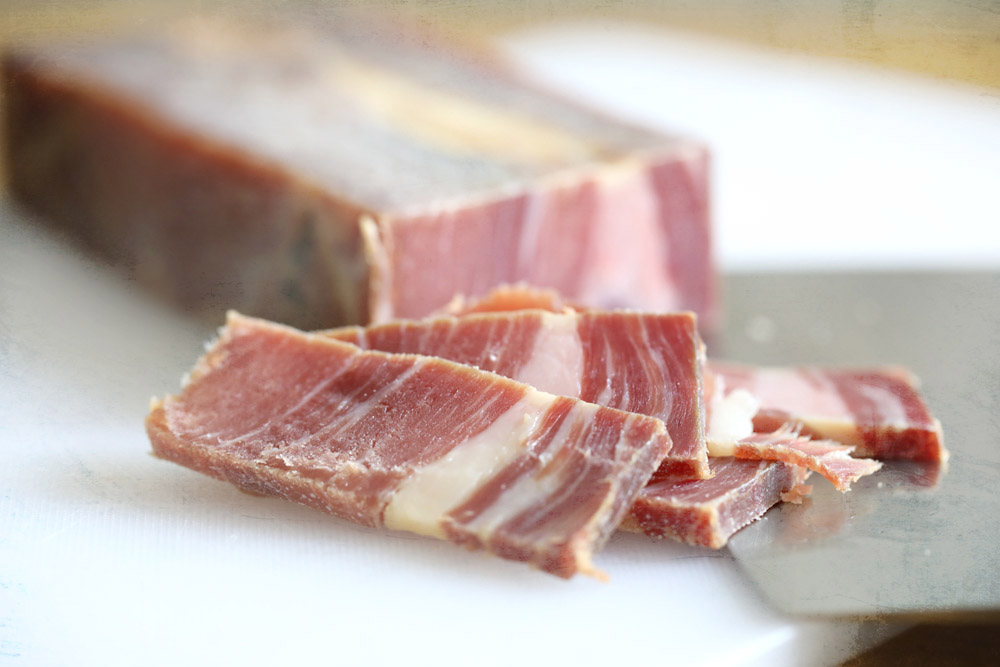 Jinhua ham is the secret ingredient that gives a superior stock its intense flavour, both salty and sweet.

All we need is some patience and let time works its wonders on the team of superhero ingredients we have assembled: the depth of flavour we only get from free range or kampong chicken, particularly the old hens; the umami-rich pair of shiitake mushrooms and dried scallops, staples in any Chinese chef’s pantry; and just a few slices of treasured Jinhua ham.

Prized for its intense flavour, deeply salty yet astonishingly sweet, the Jinhua ham has long been considered the Emperor of cured meats and the secret weapon of Chinese chefs in creating their indispensable superior stocks. (Other famous Chinese dry cured hams include Xuanwei, Rugao and Anfu.)

Named after the city of Jinhua in Zhejiang province, legend has it that Marco Polo brought the secret to making it back to Europe. Could the Jinhua ham be the forefather of celebrated cured meats such as the Prosciutto di Parma from Italy and the Spanish Ibérico ham?

Who knows? What matters is that you, too, now have your own secret weapon to level up your favourite dishes at home and raise your palate from its doldrums.

Here’s to no more “ho-hum” moments, only an “imperial banquet” for you to recreate at any time with this simple superior stock.

Begin with about or at least enough water to cover the stock ingredients. You may add more water as necessary as the stock boils, bearing in mind that this isn’t the end product (i.e. soup) so be careful not to dilute it too much.

Part of the magic is the marriage of heat and time. A good stock doesn’t come together in a manner of minutes; we are looking at hours. Nor would you speed matters up by allowing the stock boil too furiously; this would backfire and result in a cloudy broth. A slow simmer does the trick. 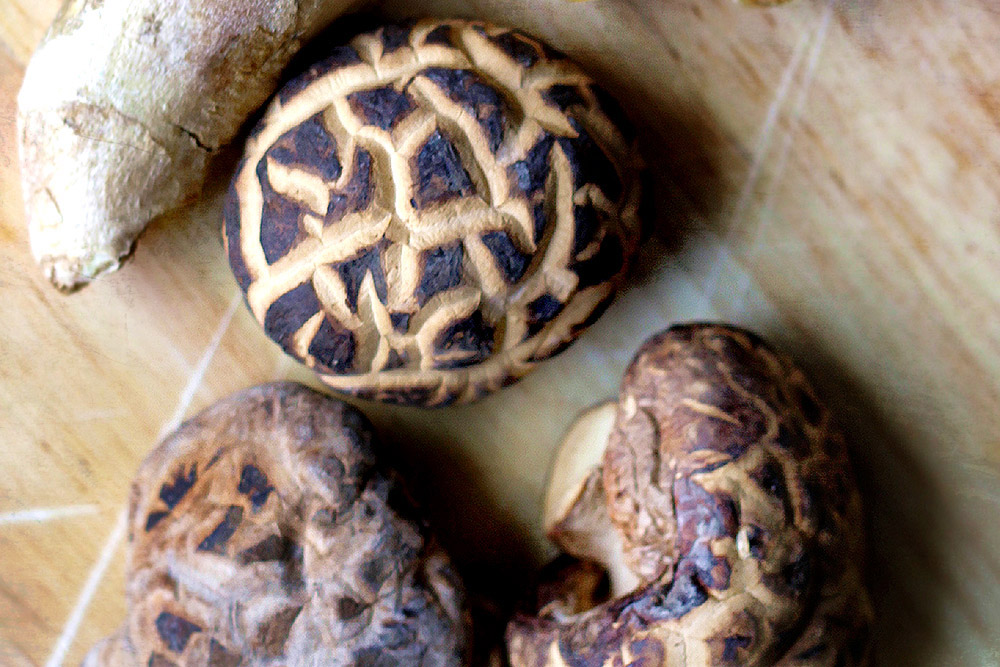 Dried shiitake mushrooms are a staple in a Chinese chef’s pantry.

If nothing else, making stock teaches us to be patient.

If you can’t find Jinhua ham, substitute with another dry cured ham; experimenting with different hams could be part of the fun.

The ginger and spring onions will remove any strong meaty odours while making the superior stock’s overall flavour more balanced. We don’t want a stock that tastes entirely of meat or seafood as that would be too cloying. 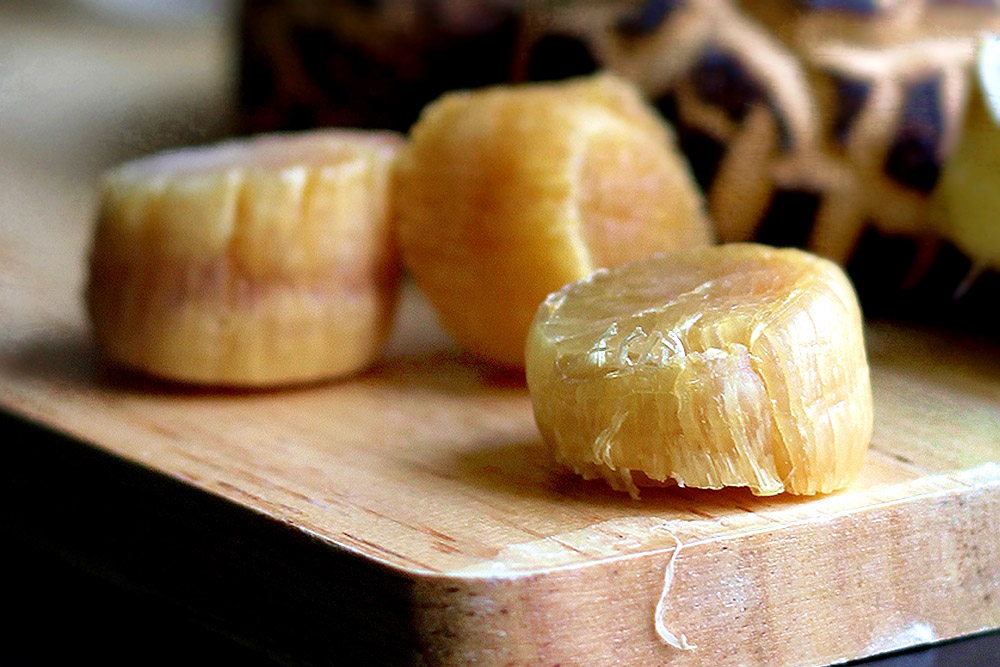 Level up the umami in your superior stock with dried scallops.

What you do with the resultant stock is entirely up to you, of course. In fact, you may ladle up some immediately for use in a soup, such as with the now tender shiitake and some added fresh oyster mushrooms and chicken meat.

Or use it as a base for a sauce or gravy, to perk up the flavours of a noodle dish or to add a luxuriant sheen to a vegetable stir-fry. Whatever you use it for, it’s bound to taste that much better. All the goodness in your pot of superior stock.

While the Jinhua ham is being blanched, add the other ingredients — chicken, dried scallops, shiitake mushrooms, ginger and spring onions — to a large pot. Fill with three litres water (or at least enough to cover all the ingredients. Bring to a boil.

Once the water comes to a boil, reduce the heat and carefully remove any scum that rises to the surface using a fine-mesh skimmer. When all or most of the scum has been removed, you may add the blanched Jinhua ham.

Now that you have added the Jinhua ham, bring the pot to a boil again. Allow the stock to boil for about 10 minutes, then reduce to the lowest setting and simmer for at least four hours. 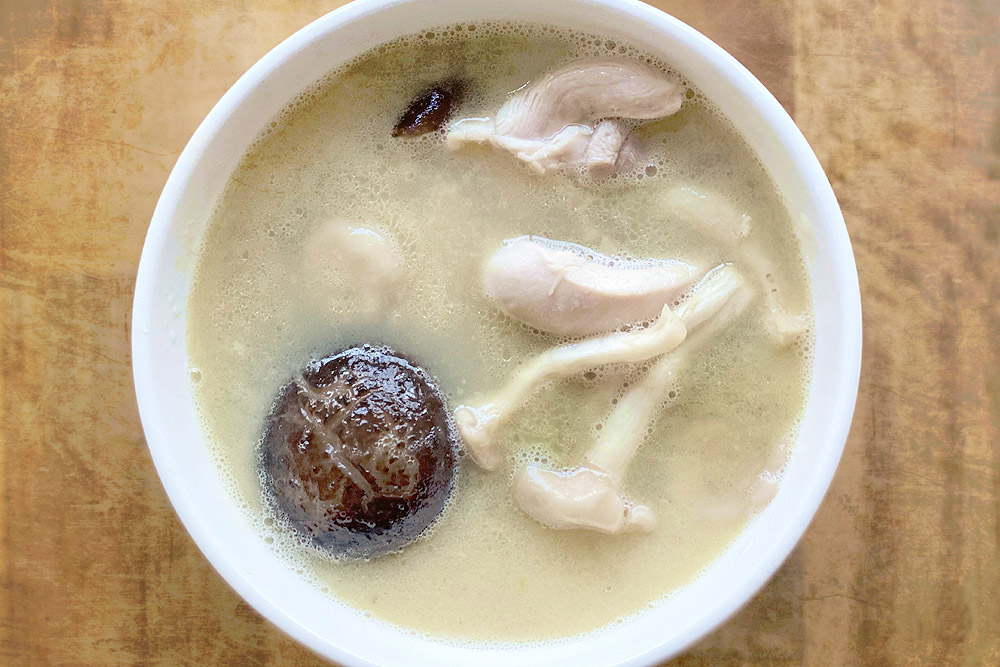 Ladle up some superior stock for use in a soup, adding fresh mushrooms and chicken.

Allow the resultant stock to cool before dividing them into air-tight containers for later use; these can be frozen and subsequently thawed when needed. Of course, you may ladle up some immediately for use in a soup, and serve it while it is hot.