Jamu your way to good health

Suwe Ora Jamu’s bottled jamus range. — Jakarta Globe pic
Follow us on Instagram, subscribe to our Telegram channel and browser alerts for the latest news you need to know.

JAKARTA, July 8 — Jamu is an Indonesian traditional herbal drink that many people in the country still consume in copious quantities, in the hope that they would never have to go to the doctor. Made from all-natural ingredients, jamu — which comes in many different varieties — is supposed to help cure all sorts of physical ailments from masuk angin (common cold), heart disease to impotence.

There are different ways to make jamu from scratch and all of them are time-consuming. The most common ways are by cold-pressing the raw ingredients or putting them in a pot to boil and simmer.

But now, even if you go to a traditional-looking warung jamu (jamu stall), most likely you’ll be served instant jamu that comes out of a foil pack.

This can be a good thing for fans of jamu, at least you no longer have to wait for a “Mbok Jamu” to go past your house. A dying breed, these roving jamu sellers, mostly women, carry a basket of bottled herbal drinks tied to their back and sell jamu door-to-door.

And if you want to have a more upmarket experience while supping on what is essentially reconstituted roots, there are now modern jamu bars where you can drink your way to better health without losing your cool. 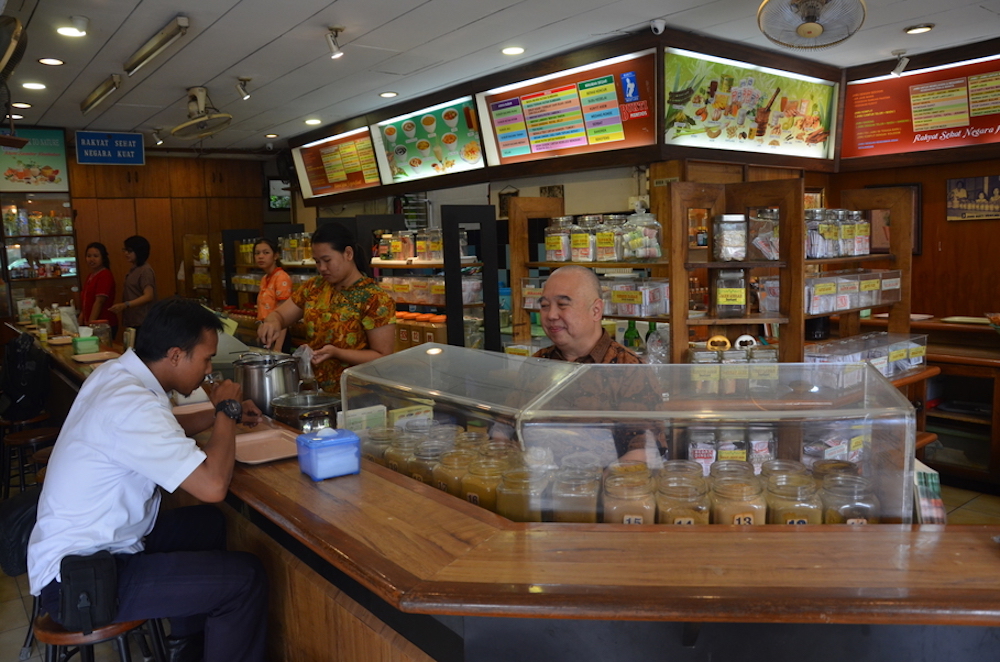 Rohmuli serves a customer at his shop in Salemba. — Jakarta Globe pic

A heartwarming laugh booms throughout the room as 58-year-old Horatius Romuli tells us about the early beginning of his family business. Romuli is a third-generation owner of the Warung Jamu Bukti Mentjos, which was first opened by his late grandmother sometime in the 1950s.

Romuli’s grandmother, Ong Siang Tjoen, known in the family as Oma Ong (Grandma Ong), was already well-known for her herbal concoctions when she was still living in Solo, Central Java, back in the 1940s.

“My Oma’s jamu could cure anything from body aches, common cold to diarrhoea,” Romuli said. 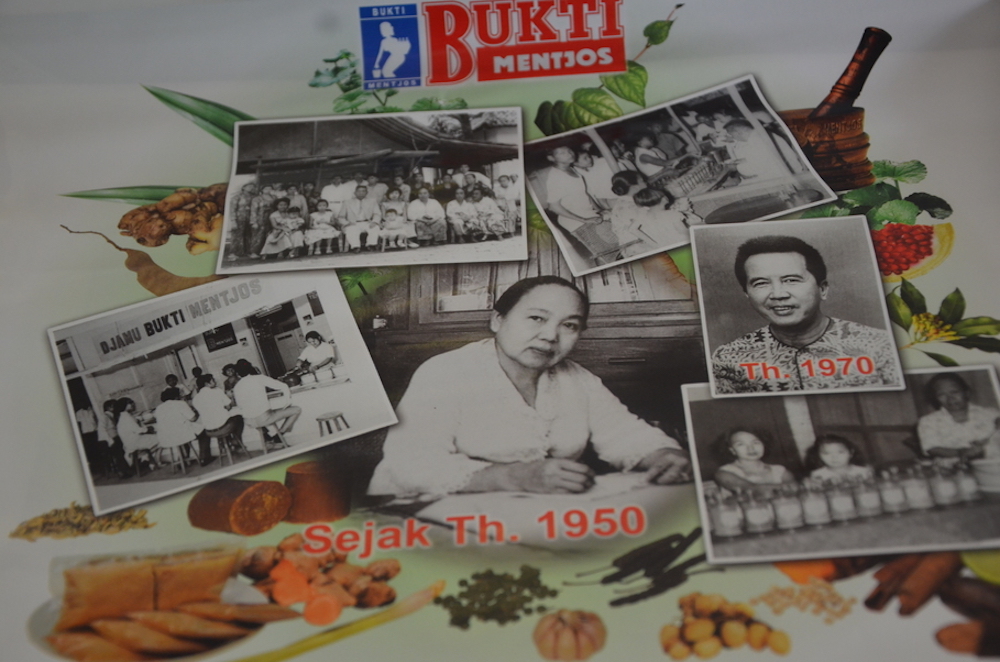 When the family moved to Jakarta in the 1950s, they decided to open a small shop across the road from the now defunct Mentjos Market near Salemba in Central Jakarta — hence the name of their shop — to sell their herbal remedies. They have stayed at the same location since.

The secret recipe for Romuli’s grandmother’s jamu has been passed down through generations. “As far as I know, there isn’t a jamu school in Indonesia where you can learn how to create a formula for it,” Romuli said.

“Oma left a book filled with her own handwriting where she put down the recipes for her jamu. That’s where we learn how to make them. We’ve never changed the basic recipes, though we’ve added some ingredients over the years,” Romuli said. 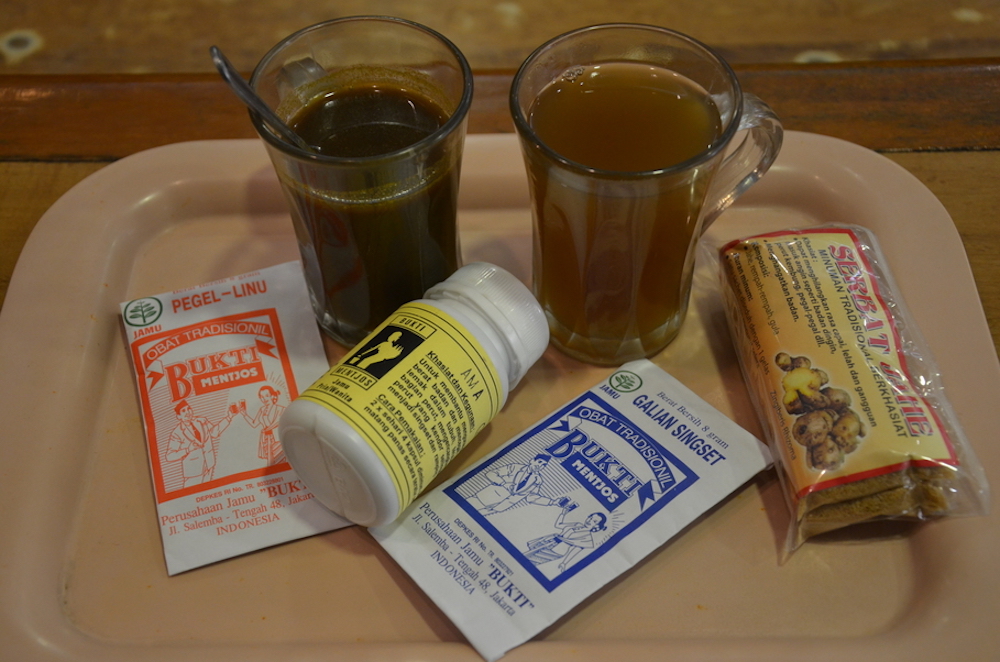 For example, since most traditional jamu drinks taste bitter, Horatius now offers his jamu in three different levels of sweetness.

“Many people enjoy drinking jamu but they can’t be bothered making it from scratch,” Romuli said. 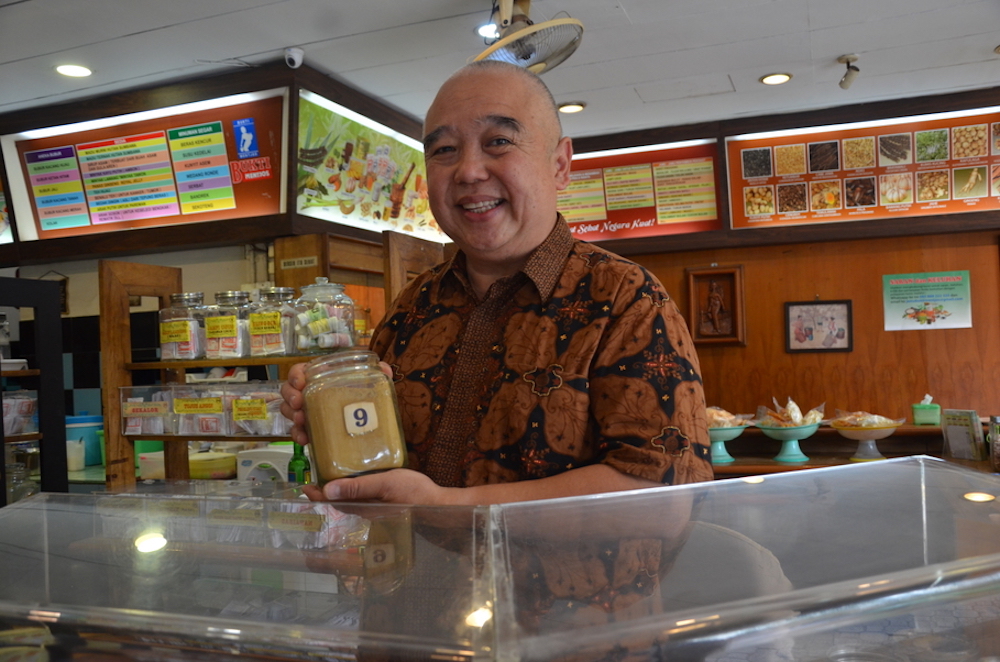 Rohmuli is the third generation in his family to take care of the jamu business. — Jakarta Globe pic

All of the jamu ingredients at the shop come from the same suppliers in Solo since it was first opened.

“They still produce the best ingredients for our jamu,” Romuli said.

Romuli still comes to the shop often and would happily tell you the fine differences between his secret powdered herb formulas number 1 to 24 and advise you which one would make you feel better. 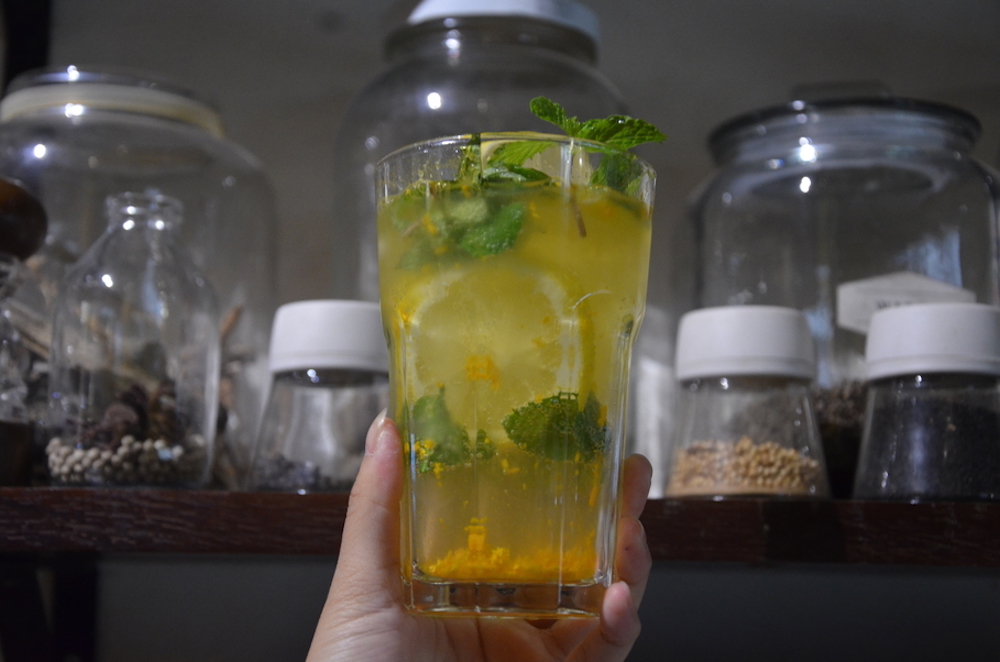 Nova Dewi drank jamu every day when she was a child that she was so disappointed to find there weren’t many jamu places in Jakarta when she moved to the capital eight years ago from Surabaya.

“I’ve never had to take medicine since I was young and one of the reasons is I think because I regularly drink jamu,” Nova said.

Suwe Ora Jamu is the title of a traditional Javanese children’s song that means “It’s been a long time since you’ve drunk jamu.” Nova adopted the phrase as the name for her jamu joint to create a feeling of nostalgia for the small chic shop nestled in a trendy area of South Jakarta.

“My grandmother used to tell me that you have to prepare jamu with your heart because jamu means a prayer for your health,” Nova said.

“Jamu is not medicine though. It’s a healthy herbal drink that you drink so you don’t get sick. You don’t drink it to cure a sickness,” she said.

“All of the jamus at our shop are based on my grandma’s recipes, but I modified them to suit young people’s taste,” Nova said.

Nova also makes it easier for busy urbanites to drink jamu by selling bottled versions of her concoction.

She also makes jamu mocktails that are quite popular with her shop’s regulars. One of them is “Kunyit [Turmeric] Squash.” The turmeric is chopped, grated and finely squeezed. The thick orange liquid is then mixed with lemon juice and plain soda. The sunset-coloured drink tastes tangy and refreshing.

Its “Kunyit Asam” (“Turmeric and Tamarind”) is sprinkled with finely ground black pepper to activate the turmeric’s benefits for your body.

“Some of the traditional jamus are very bitter and the colours are not very attractive. We’ve made our jamus milder so everyone can enjoy them,” Nova said.

Though her jamus have a modernised taste, they’re still made from natural ingredients. Its “Rosella,” for example, uses real red flowers. “Sereh Telang” uses blue pea flowers that give the drink a navy hue.

To learn more about jamu’s health benefits, Nova — who is often seen at Suwe Ora Jamu dressed in traditional wear — took a course in Naturopathy, Nutrition and Herbal Planting while pursuing a business degree at University of New South Wales in Sydney, Australia. 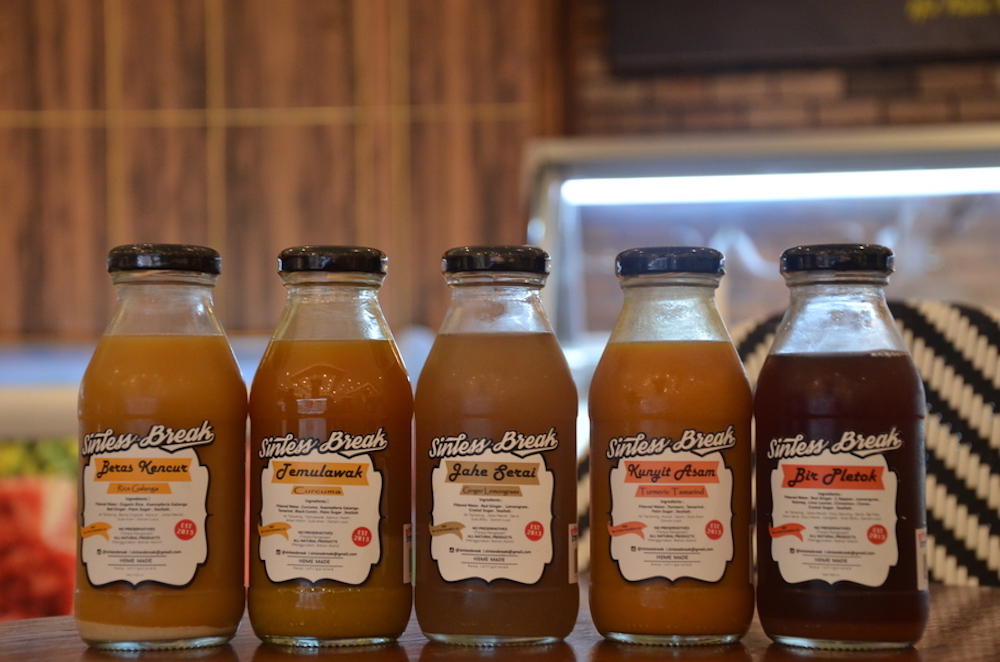 Marina Dewi has been making juices and smoothies since she was in junior high school even though her family was often reluctant to try her strange concoctions.

In 2013, Marina was finally able to turn her hobby into a business, launching a range of jamu drinks called Sinless Break.

“Sinless break for sinless pleasures, that was the concept. I want people to enjoy their foods and drinks with no guilt,” Marina said.

Marina decided she would try her hand at making jamu when juices and smoothies suddenly started to become mainstream.

“Juices and smoothies are trends from overseas, jamu is an Indonesian original, a real heritage of this country,” Marina said.

“My aim is to produce next level jamus,” Marina said, showing off jamus packed in nifty glass bottles. The back of the bottles has stickers detailing the health benefits of each drink. 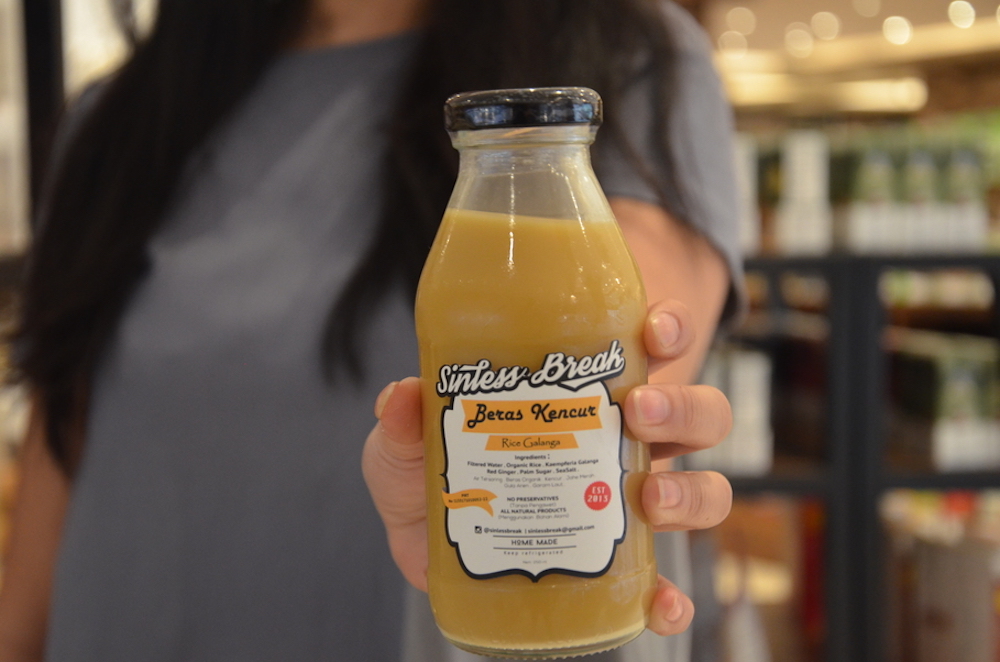 All of Sinless Break’s jamus are made with organic ingredients and contain no refined sugar or preservatives.