MAY 10 — Like other pension funds, the Malaysian Employees’ Provident Fund (EPF) is a very distinctive form of assets — peoples’ hard-earned money pooled together and fund managed, to support their retirement lives — and is one of the cornerstones of our national social security system.

Although EPF does a reasonable job at safeguarding and growing peoples’ lifetime savings, there is still much room for improvement.

This became even more obvious as living through the pandemic revealed sheer inadequacies in the methodology of the Malaysian Consumer Price Index (CPI). Malaysian CPI in March 2022 rose by 2.2 per year-on-year basis. However, an average Malaysian consumer could anecdotally attest that prices of many essential food items, including meats and vegetables, have risen at least three to four times the figure reported by the Department of Statistics Malaysia.

In other words, Malaysian CPI appears to seriously understate the real inflation making it highly questionable whether the EPF indeed consistently outperformed its target of at least 2 per cent dividend in real terms, i.e., adjusted for inflation (Figure 1). 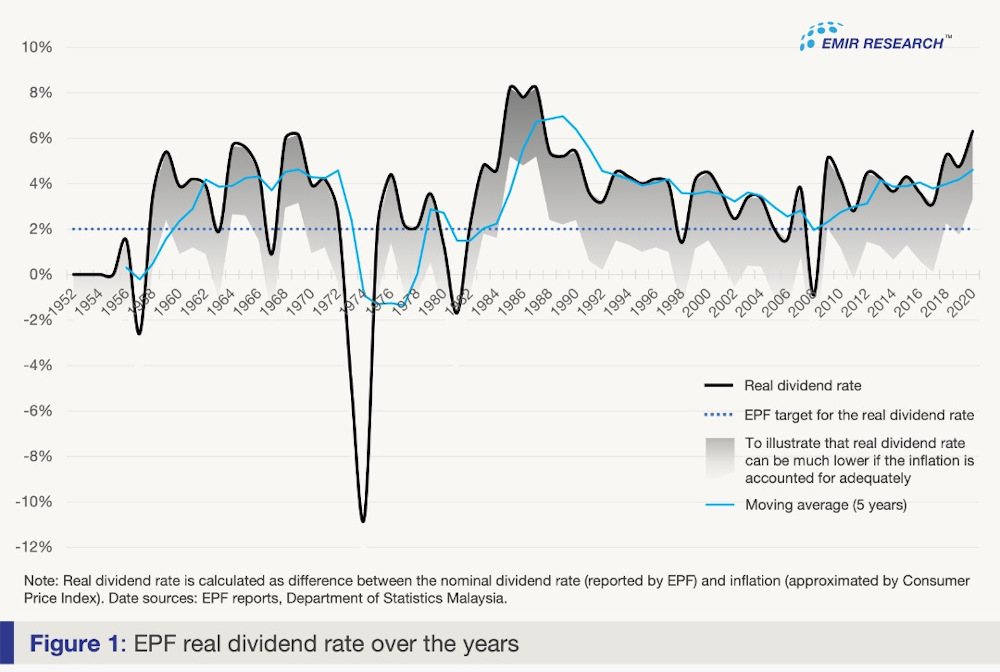 Explicitly or implicitly, governments always stand behind such “lifetime banking” schemes as EPF. Namely, if people have no sufficient income to live on at retirement, the government (of course a responsible one) will have to bear more fiscal costs of meeting it.

However, the governments also often hold pension funds hostage to their historical fiscal imprudence as one form of “financial repression”.

Financial repression refers to governments’ broad spectrum of policies to “capture” and “under-pay” domestic savers. Such policies, among other things, include forced lending to governments by pension funds and other domestic financial institutions.

On top of that, according to the “Pension Funds and Financial Repression” report by the World Bank, this strategy most often aims to provide cheaper loans to governments and companies — in the Malaysian context, this would undoubtedly be Government Linked Companies (GLC). This strategy reduces the government’s and GLCs’ burden of repayments and contributes to the deficit reduction but at the expense of lowering the returns to savers.

However, even if these “captive” domestic lenders provide funds to the government at market interest rates, this investment still carries significant opportunity costs to the savers.

Financial repression is most successful in liquidating government debts when accompanied by a steady dose of inflation. As Reinhart and Kirkegaard explain, when financial repression produces negative real interest rates (i.e. when the return paid by the government on its securities to the fund is lower than inflation), it becomes effective funds transfer from creditors (savers) to borrowers (government and GLCs). The latter directly follows from the Fisher equation, and a study by Reinhart and Sbrancia documents such historical episodes internationally.

Investments in fixed income instruments, including government securities, do anchor the overall portfolio and preserve members’ savings while providing a stable income stream.

However, global empirical evidence (see, for example, Jeremy Siegel and Yu-Wei Hu) convincingly suggests that, over the long-term, highly globally diversified equity exposure offers not only greater return but lower risk. This might sound contra intuitive. But the keyword here is long term. And EPF, like other pension funds, differs from other institutional investors, e.g., mutual funds, precisely in that their investment horizons are relatively long, up to 40 years.

Malaysia’s EPF, in its history, went through a period of acute over-investment (90 per cent of the portfolio) in Malaysia Government Securities (MGS). And even in the revised regulation as stipulated in EPF Act 1991 (Section 26B, subsection 1), EPF is still required to invest at least 70 per cent of its total investments in MGSs, while Minister may vary this percentage (subsection 2).

Apparently, the 70 per cent requirement has been relaxed by the government (in line with section 2) so far, as the EPF’s total MGSs holding as a percentage of total assets has been significantly lower than the draconian 70 per cent (refer to Table 1). However, the EPF Act still dangerously preserves an opportunity for discretional tightening of this requirement by the government.

Furthermore, positively, EPF reduced MGSs holdings as a percentage of total assets from 35 per cent in 2006 to 25 per cent in 2020 (Table 1). But unfortunately, the rate of reduction has stalled since 2015 —- remarkably, the year when the world’s biggest financial scandal, 1MDB, laid bare open the Malaysian government’s inability to manage peoples’ money prudently.

However, the figures representing MGS investment as a percentage of total fixed income asset class (Table 1) show an unhealthy increasing trend. At the same time, the percentage contribution from MGSs to the total gross investment income of the fund has shrunk significantly over the years, pointing to the opportunity costs eroding savers’ funds. As of December 31, 2020 EPF held RM 246 billion worth of MGS, which is over half of the total outstanding stock of MGSs in that same period. 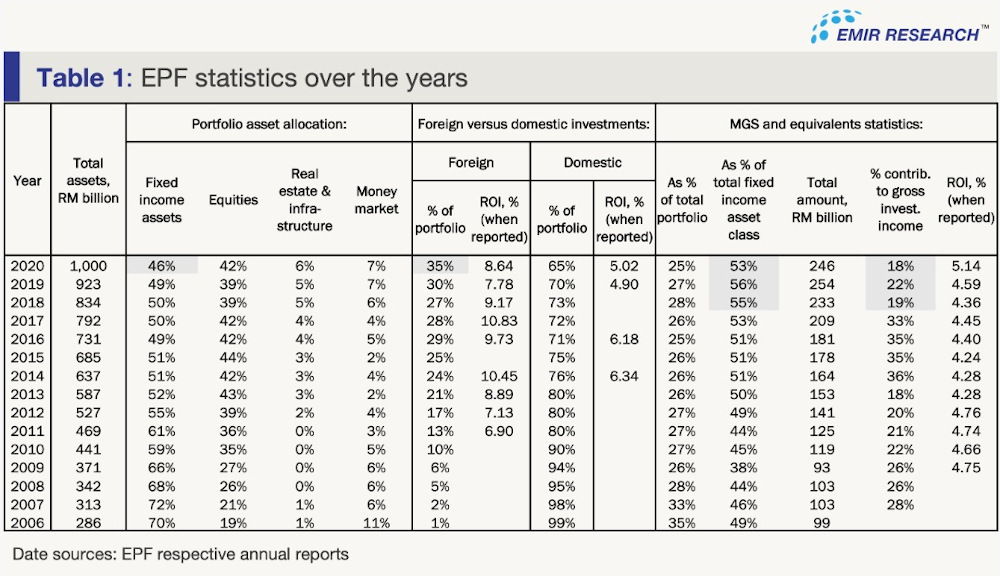 Given that Norway Government Pension Fund Global (GPFG) is exceptionally transparent in its investments and provides instrumental comparison data, we can benefit from their insights.

First, total fixed income assets comprise only 25 per cent of the entire GPFG’s investment portfolio (versus 46 per cent in the EPF portfolio as of December 31, 2020).

Second, 0 per cent of GPFS’s total fixed-income assets are in Norway government securities, in line with the general fund’s requirement to invest abroad solely. This strategy is to prevent overheating the local economy and minimising the possibility of corruption.

So, in which government securities does GPFG invest to provide stable anchoring to its portfolio? Table 2 provides a detailed breakdown.

As it turns out, GPFG’s investment in government securities is highly diversified globally — 48 countries (versus EPF’s 56 per cent in MGS). Moreover, GPFG holds the lion’s share (92 per cent) of its government securities investments in 25 highly developed nations — all among the top-ranked in the Corruption Perception Index. Remarkably, GPFG has dramatically reduced its holdings of Malaysian government bonds in a very recent times.

Also, GPFG’s government securities investments are in index-linked bonds as protection from changes in the underlying index (usually tied to Consumer Price Index). Having this class of asset highly diversified internationally provides even more adequate protection. 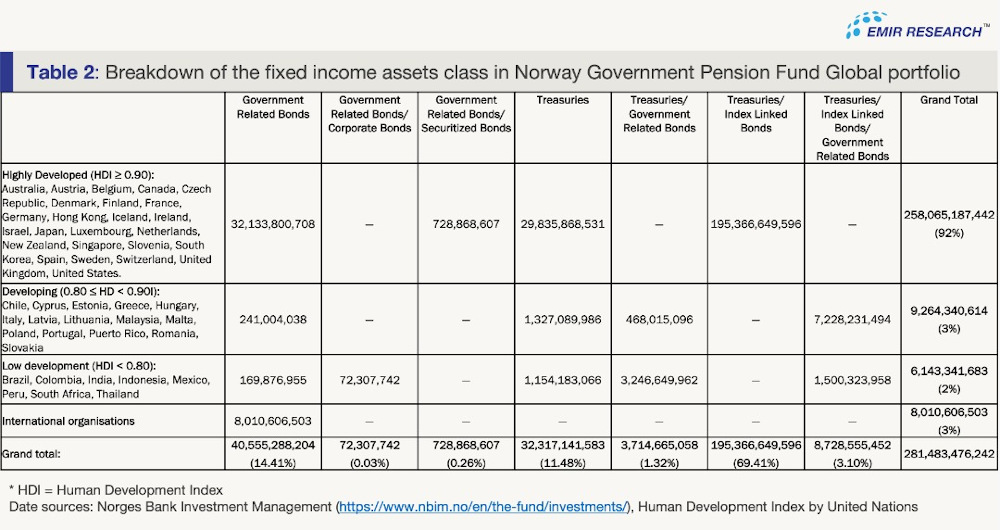 Although EPF management has gradually increased its equity and foreign exposure since 2006, the dynamic has slowed (Table 1). However, this increase in equity has already resulted in a noticeable uptick in its returns (see five years moving average in Figure 1).

Using public pension savings as a captive lending facility for the government could be accepted as a very temporary measure amid extraordinary systemic events. For example, many governments, including Norway, did so amidst the Covid-19 pandemic.

However, according to the World Bank, even as a temporary measure, “making pension funds a target for financial repression” should come with the important strings attached:

1.            Accessing sources of public pension savings is less harmful than private ones.

2.            The funds should be subject to clear transparency and accountability rules while used exclusively to support inclusive economic growth and sustainable development. In other words, channelling these funds to projects must be done through dedicated financial instruments labelled as such and tightly governed through a highly transparent Input-Output-Outcome-Impact (IOOI) framework linking the cost of capital to specific development results (see EMIR Research work on “Transforming Malaysia from third- to first-world country” for IOOI explanation).

Therefore, EPF management should significantly step up its moves along the right trajectory:

3.            For the remaining MGSs holdings, introduce the IOOI framework that incorporates radical transparency.

5.            For local equity investment, prioritise sectors where 4IR tech significantly increases returns while nearly eliminating risks and has captive local markets. One such example EMIR Research has presented to policy makers’ attention in its earlier article titled “4IR enabled farmers: Solving national food security”, indicating that this type of investment brings double-digit returns with almost negligible risk versus 4.5 per cent ROI from MGSs. On top of that, it has a profound multiplier effect on the economic growth and development of the country.

* Rais Hussin and Margarita Peredaryenko are part of the research team at EMIR Research, an independent think tank focused on strategic policy recommendations based on rigorous research.