JANUARY 26 ― Lately we often hear the name “Sheikh Jarrah” mentioned in reports on the atrocities committed in Palestine by the Israeli apartheid regime. In fact, the name does not refer to a person but rather a neighbourhood in East Jerusalem where many Palestinians live. But they are now facing a very worrying and tragic situation because the Zionist regime is in the process of seizing their land, demolishing their homes and driving them out of the area.

To understand why this is happening, we need to go back to the Palestine of the 19th century. At that time, Palestine was under the control of the Ottoman Caliphate and in Europe, Jews were being oppressed by the Europeans. As a result, a group of them decided to migrate to a place where Jews could live safely and no longer be a target of persecution.

These people, who called themselves Zionists, then decided to emigrate to Palestine because of its historical connection to Jews. But the problem was the place had already been populated by indigenous Palestinians for thousands of years. The Zionists therefore decided that the only way a homeland for the Jews can be established was to colonise the land, drive the Palestinians out and replace them with Jews who will be invited from all over the world to settle there. In other words, it was a settler-colonial project.

Their plan was supported by the British government which had succeeded in taking power over the area after the fall of the Ottoman Caliphate in 1925. Understandably Palestinian Arabs opposed it, and engaged in armed resistance. Many were killed in this struggle.

Unfortunately Palestinian resistance efforts failed to curb the process of ethnic cleansing of their land by the Zionists who were in possession of more sophisticated weapons and also were more organised and brutal. In 1948 following numerous massacres of Palestinian villagers, the Zionists seized more Palestinian land and declared their new state of Israel, which was immediately recognised by the US government.

Around 750,000 Palestinians became refugees. Some families from West Jerusalem and elsewhere ended in the Sheikh Jarrah neighbourhood in east of Jerusalem which was at the time under the control of the Jordanian government. The move was agreed upon by the United Nations Relief and Works Agency for Palestine Refugees (UNRWA). The Palestinian families were promised permanent titles to their residence and would no longer have the status of refugees. Unfortunately, the Jordanian government failed to implement this promise.

In 1967, there was another war between the Arab states and Israel, which resulted in Israel gaining control of East Jerusalem, including the Sheikh Jarrah neighbourhood and all of the West Bank. Despite the Israeli occupation, the Palestinian population in Sheikh Jarrah continued to grow and by 2016 the total was 327,000.

Under international law, Israel is supposed to withdraw from the West Bank as well as East Jerusalem. But Israel refused to end its occupation of the areas it gained. In fact, the Israeli government has facilitated the establishment of hundreds of new Jewish settlements in the West Bank and also helped relocate thousands of Jews there and in East Jerusalem, including to the Sheikh Jarrah district. It claims that all the areas were historically Jewish property since thousands of years ago based on the teachings of their religious texts.

In 1970 the Israeli government passed a law that officially allowed Jews in Israel to take over land and houses in East Jerusalem if it was proven the properties were once owned by Jews who had to move out as a result of the 1948 war. But Palestinians in Sheikh Jarrah and elsewhere who had been forced to leave their homes in historic Palestine during the war were not given similar rights to move back to their homes. The injustice of the Israeli law is obvious to everyone. 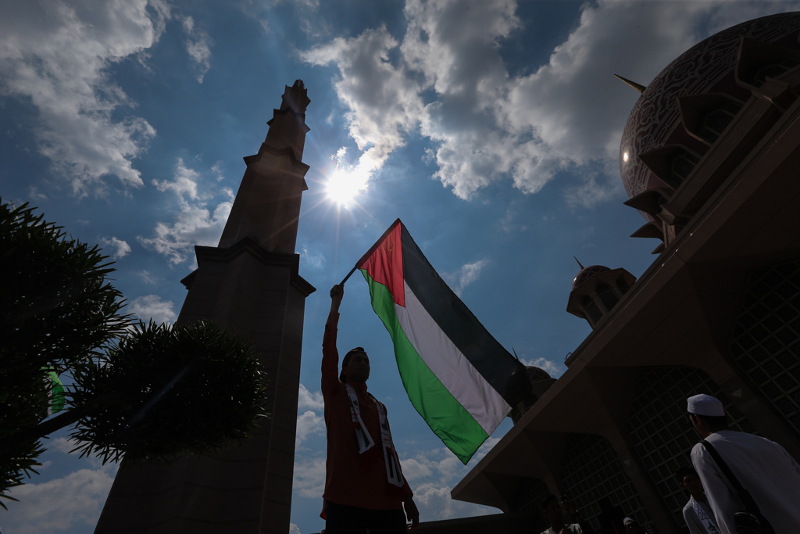 A silhouette of a man rise the flag of Palestine during the Save Jerusalem solidarity gathering at Putra Mosque December 22, 2017. — Picture by Ahmad Zamzahuri

Beginning in 1972, Israeli Jews have seized the opportunity given by the unjust law to claim title to properties in East Jerusalem. Currently, the Zionists have seized more Palestinian homes in the Sheikh Jarrah area and forcing the residents out. During the latest incident on January 22, Israeli troops entered a house inhabited by a Palestinian family and detained them for refusing to vacate their home. The house was then demolished so that the family would not be able to return.

The same fate awaits hundreds of other Palestinian families in Sheikh Jarrah, Silwan and several other districts in the West Bank if the world community does not act to stop this ethnic cleansing crime.

The fact is that the Zionist regime has planned since before the establishment of the illegal state of Israel to seize all Palestinian territories including the West Bank and Gaza and will not stop until their plan is achieved.

Unfortunately for them, the Palestinians are not giving up their efforts to defend their rights and liberate their country from Zionist occupation, even though thousands of them have been killed and thousands of others are languishing in Israeli jails. People with conscience from all over the world, if they are to remain true to their claim to uphold justice and human rights, have no choice but to assist the Palestinians in their noble struggle for freedom, justice and equality.