APRIL 19 — Global Food Security Index (GFSI) is a comprehensive, rigorous,well-structured framework and rich data source for visualisation, analysis, and understanding food security drivers across countries and time. The index, developed by the Economist Intelligence Unit with the panel of international food security experts, exists since 2012.

The GFSI model comprises four critical dimensions: availability, affordability, quality and safety, and natural resources and resilience. Each dimension further breaks down into a series of indicators that evaluate various programmes, policies and practices unanimously recognised by global experts as the key food security drivers.

The following plot summarises the GFSI (overall reading and dimensions) for the Asia-Pacific region in 2020. The green dominated rows on the graph belong to countries that scored more favourably on nearly all food security dimensions. 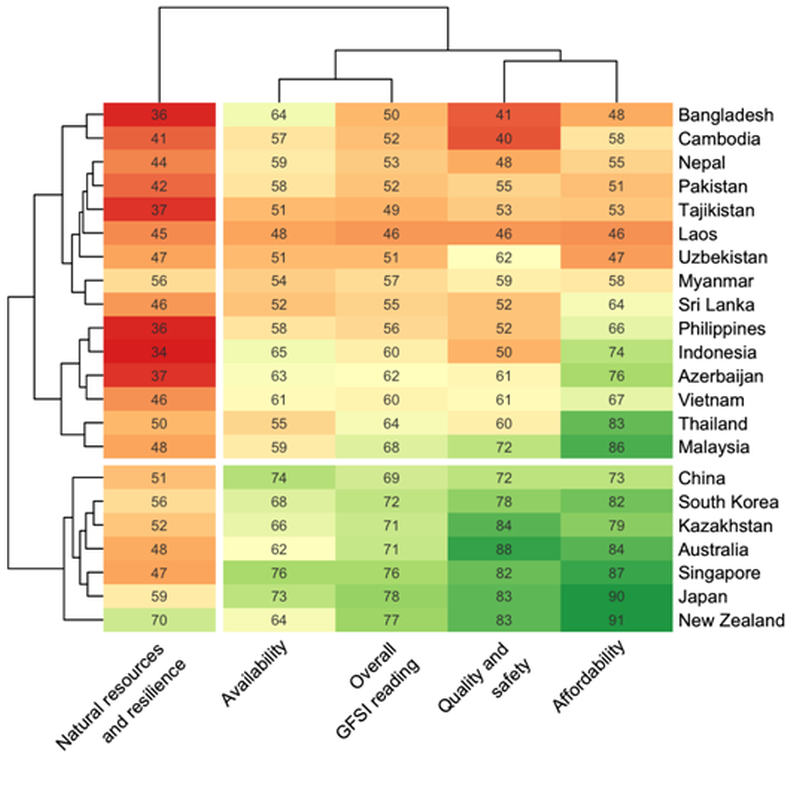 Lines sticking out by the side of the plot (dendrogram) are the output from hierarchical clustering. They indicate what countries are very close to each other in their food security profiles. Thus we can look beyond simple index ranking.

If we were to look at this chart while flipping the timeline from 2012 to 2020, we would have noticed few worrying dynamics.

First, until 2016 these countries were somewhat equally divided into two major groups—those doing better (green) and worse (yellow/orange) on food security. After 2016, the division into these two groups has been preserved, but the group dominated by green colour has started to shrink rapidly–only a few countries have consistently remained in this top league.

Malaysia has been lingering in this "better off" group over the years while remaining at approximately the same level for GFSI readings and even losing its position on availability dimension, and in 2020, it did not cluster with the leading group for the first time (see the graph).

The second worrying observation is that natural resources and resilience have strongly emerged as separate cluster over the years. Countries might be doing better or worse in terms of availability, affordability, and quality and safety of their food; however, it is becoming increasingly difficult for all countries to preserve their natural resources and resilience. This is especially problematic when we realise that this dimension of food security is forward-looking.

From the above graph, a logical question suggests itself. What makes the top league countries in the region, such as Australia, China, Japan, Kazakhstan, New Zealand, Singapore and South Korea to outperform their counterparts (now including Malaysia) consistently and why the hierarchical clustering statistical method did not see Malaysia as sticking with this group in 2020?

It is not surprising to see among those leading the food security list countries like Japan, Singapore and South Korea. These countries have long pledged technology to serve their societies in an all-encompassing way under the umbrella of "Society 5.0". This, of course, includes such an essential aspect of human existence as the ability to put food on our tables.

Closer analysis of all the leading countries in Asia-Pacific reveals that they all, including recently Kazakhstan, focus on boosting agri-food technology and preparing agri-tech specialists at scale.

The other common trends among these countries include the following: placing food security at the highest level of priority by the state administration; spear-heading national policies towards food self-sufficiency; heavy investment in agri-tech research and development; particular focus on small farmers and local agri-techpreneurs via financing, incentive schemes as well as connecting them into extensive networks and e-commerce channels thus allowing these small players to collectively bring their produce to the local market to be price-competitive.

These countries are building vibrant ecosystems around their agricultural sectors infused with omnipresent technology. The technology use is ubiquitous indeed—from boosting the crop yields while reducing costs(with IoT, blockchain and automated climate control) to grant management and innovative financing.

Now we examine closer why Malaysia did not cluster with these countries in 2020. The following table summarises the GFSI-2020 indicators for which we observe a negative difference with the high performing countries in the region as a group. 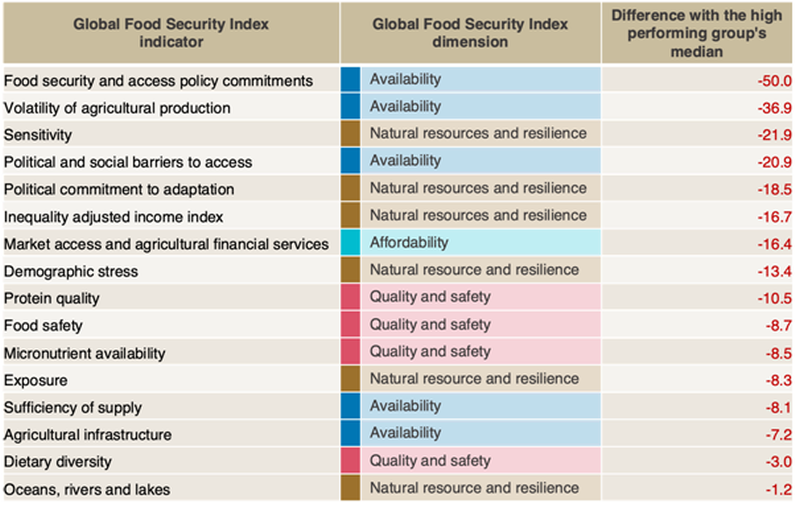 From the first glance, Malaysia is at par with the top-performing countries on the affordability dimension; however, the above table reveals that country's market access and agricultural financial services significantly lagging. Malaysia scored low on the availability of diversified financial products for all farmers (including small-holders) and access to market data and mobile banking that has been in a declining trend since 2016.

On the contrary, availability indicators top the list of problematic areas for Malaysia.

The remarkable difference is Malaysia's low score on food security and access policy commitments. Closer examination reveals that this indicator includes assessing whether the country's government has made food security afocus area and priority and has a clear food security strategy. Notably, for years, from 2012 to 2020, Malaysia has been receiving a zero score on this measure from the food security experts.

For the same period, from 2012 to date, the experts have also been highly sceptical of the Malaysian government's ability to be held responsible and accountable for whether it has invested in and taking a coordinated approach to achieving food security.

For the availability dimension, Malaysia also scored relatively low compared to the leading group of Asia-Pacific countries on food supply adequacy measured as average dietary energy requirement (underlying data is provided by the Food and Agriculture Organization of the United Nations).

Close to the dietary concerns is Malaysia's relatively low score on food quality and safety indicators such as protein quality, micronutrient availability, food safety and dietary diversity. According to the experts, nine essential amino acids, iron and zinc in Malaysia's average diet are relatively low (underlying data is from Global Nutrient Database). This possibly points to destructive land-use practices, among other things, and should be investigated by experts.

Last but not least are few problematic areas under the natural resources and resilience dimension. Here sensitivity appears to be the most severe problem due to Malaysia long-standing high food import dependency and high dependency on natural resources for economic output, which, if affected, though its close link with the national income, may severely impact rakyat's ability to secure food.

Political commitment and will seem to hurt Malaysia also on natural resources and resilience dimension. Malaysia scored very low in the region on its climate-smart agriculture, commitment to managing exposure and national agriculture adaptation policy.

This is especially worrisome when we consider other natural resources and resilience risks highlighted in the above table, such as exposure to global weather changes, projected population growth and urban absorption capacity—areas where Malaysia appears at the bottom of the list from best to worst in the region.

The above alarming insights should give the national field experts and leaders a solid impetus toseriously reassess and reposition Malaysia's food security strategy. Food security should be placed under the nation's sovereign control as a matter of highest priority not only to survive in the ever-disrupted world but yet for another reason. Greater food security through higher price control and, therefore, higher disposable income is tightly linked to better GDP performance and overall national prosperity.

* Dr Rais Hussin and Dr Margarita Peredaryenko are part of the research team at Emir Research, an independent think tank focused on strategic policy recommendations based on rigorous research.