KUALA LUMPUR, May 7 — The Samsung Galaxy A51 was launched in Malaysia earlier this year, with the Korean company launching the midranger along the Galaxy A71. At the time, only a single memory configuration was available: 6GB of RAM and 128GB of storage for RM1,299.

Now, Samsung Malaysia has announced that a new variant of the Galaxy A51 with 8GB of RAM is set to arrive in Malaysia, although storage remains at 128GB. From the 8th of May 2020, customers can pick up the upgraded RAM Galaxy A51 from Samsung Malaysia’s e-store, Experience Stores, as well as authorised dealers. 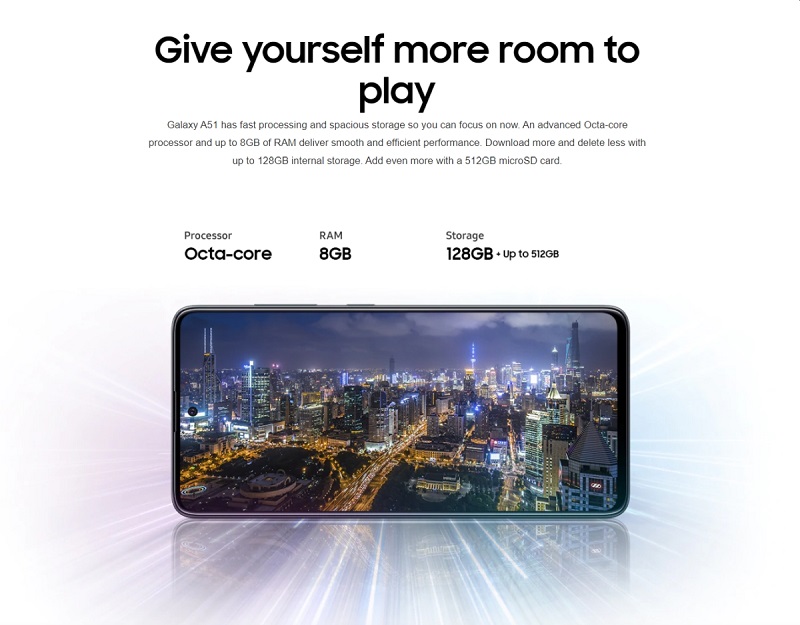 Just like the 6GB RAM Galaxy A51, three “Prism” colours will be available: Prism Crush Blue, Prism Crush Black, and Prism Crush White. To recap on the specs of the Galaxy A51, you get a Full HD+ Super AMOLED 6.5″ display; the Infinity-O display has a single hole-punch cutout that houses a 32MP front-facing camera for selfies.

On the back of the phone, there is a quad-camera setup. This is made up of a 48MP wide-angle camera, a 12MP ultra-wide shooter, a 5MP macro lens and a 5MP depth sensor. The new RAM option of 8GB is mated to Samsung’s Exynos 9611 chipset, while the A51 is sustained by a 4,000mAh battery. Meanwhile, fast-charging is supported at 15W via USB-C.

While Samsung says that the upgraded Galaxy A51 will allow users the ability to get more done in the same amount of time (over the 6GB variant), it’s worth mentioning that the processing power of the upgraded smartphone is still identical. Instead, more RAM basically means that the device will handle multi-tasking better, as opposed to actual power to compute tasks faster.

That said, an increase of RM100 (over the RRP of the 6GB RAM Galaxy A51) is still fairly minimal price to pay for increased RAM. Perhaps Samsung could have included a 256GB storage variant as well, although the Galaxy A51 has expandable storage of up to 512GB.