Tuesday, 02 Aug 2022 2:10 PM MYT By Player's Blog
Follow us on Instagram, subscribe to our Telegram channel and browser alerts for the latest news you need to know.
By Player&#039;s Blog

AUGUST 2 ― What a wonderful couple of weeks it's been. To capitalise and win the way I did the last two weeks, it was pretty tight there going down the stretch and I was able to pull away with some birdies. I said during the broadcast interview after I won the 3M Open that for some reason I kind of had a sour taste in my mouth as I bogeyed the 18th, and I think it just gave me extra motivation to put myself in there again and prove to myself the kind of champion that I am, and being able to make birdies down the stretch when you really need them.

So that's all I tried to do. When I got to the 14th tee, my goal was to birdie 14 and 17 and if I could do that, I knew I was going to win the tournament. I was just proud of the way I finished. Wins are so special out here because they're so rare. I think I'm going to really be able to soak these up when I'm home. It hasn't hit me yet, the magnitude of what I've accomplished. It’s special winning on the PGA Tour, where the best players in the world are. It doesn't matter what tournament, you just have to play well and earn the victory. To have earned these last two is very satisfying. 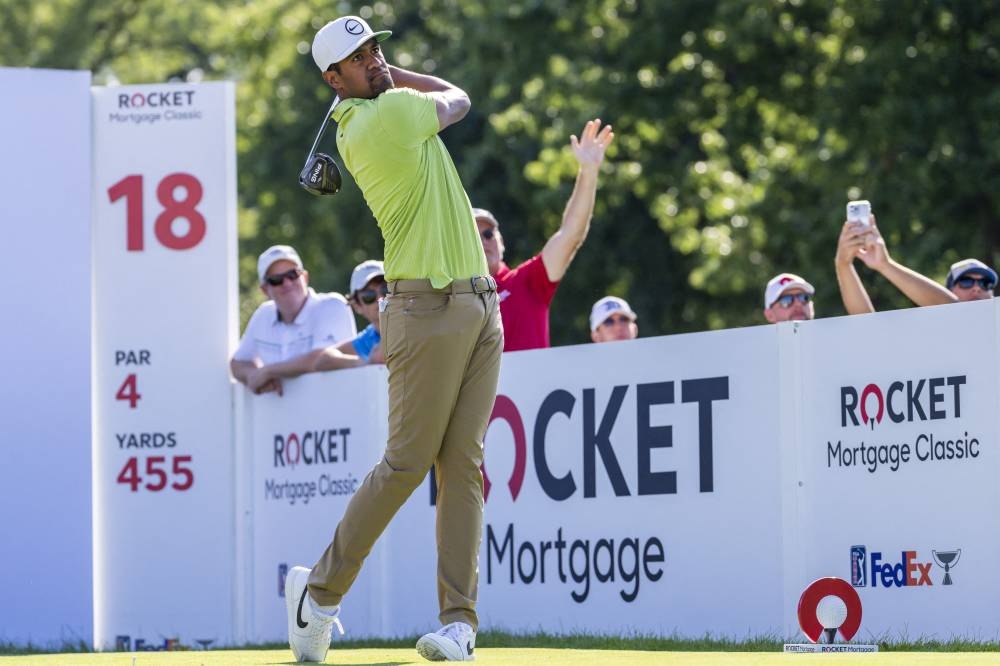 Tony Finau hits his tee shot on the par 4 eighteenth hole during the final round of the Rocket Mortgage Classic golf tournament. ― Raj Mehta-USA TODAY Sports via Reuters

It's funny, we talk about goals. I write down my goals before the start of every season and I was able to peek at them the night before the final round in Detroit. One of my goals was to be a multiple winner on the PGA Tour this season, and to be able to accomplish that is amazing. Another goal is to win the FedExCup and I have now put myself in position to do that. Scottie Scheffler is going to be extremely hard to catch, and there are guys like Sam Burns who have had unbelievable seasons and I think Cameron Smith is up there as well. Those guys will be tough to catch, but the way the points work in the Playoffs, you're able to race up that ladder pretty fast. At least I have now given myself a chance to do that. I think I've said it many times before that a week can change your life. I guess when you look at mine, back-to-back weeks have changed my life and it's a great feeling.

I’ve endured a lot of the tough losses in the past where I’ve put myself in situations to win but wasn’t able to do so. However, I'm very optimistic. I've always been that way. I've always had hope and faith that things will turn out if I keep working hard and putting myself there. And that's the thing, I challenge myself every week to push past what I feel like I'm capable of. By that, I mean just my emotions. You know, these hurdles that you face during a tournament, you try and put yourself in uncomfortable situations and I proved to myself these last couple weeks that I've done that and won some golf tournaments. I'm proud of the way I fought through adversity. They say a winner is just a loser that just kept on trying, and that's me to a ‘T.’ How many times do I lose? One thing I won't do is give up, and I'm only here as a winner because I chose not to give up and to keep going.

These last couple weeks I've been able to put myself in similar situations as in the past, but my game is now sharper, I'm stronger and I'm just a better player to be able to seal the deal and take control of golf tournaments. You have to earn all of them out here, and that's something I've learned. Guys are rarely going to fold, and the more you put yourself in there, crazy things happen. At the 3M, something crazy happened. I put myself right there and Scott Piercy was leading for pretty much the whole tournament. Next thing I know, I've got a four-shot lead with two holes to play. Things like that happen out here.

It feels very satisfying to capitalize on the two ball-striking weeks that I've had. I feel like I've been hitting it really nicely for a while and I haven't quite put myself right there. I did in Canada and had a good chance to win there, and I did in Mexico at the new tournament. These two weeks I've been able to make the putts when they count. I think that's pretty special. I feel like my game has evolved dramatically from the start of my career until now. The Detroit Golf Club was a golf course that didn't look very good to me the first time I played it in 2020. But the golf course looked pretty good to me this year. That told me I'm a lot better than I was a couple years ago. I think we evolve as players and as people, and I’m proud my game has evolved the way it has.

At one point, I was trying to hit the ball a little further than I was because I have a lot of speed in the bank. What I learned from that and my game evolving is I don't really need to change anything. I just needed to get a little sharper, my short game has to be better, and I have to putt better. Those are all things I've known over the last couple of years and I've worked extremely hard on them, so now I'm enjoying the success and it's all due in part to me just looking at myself square in the eyes and knowing I'm not as good as I can be, and addressing those parts of my game that needed to be elevated for me to be a great player.

I make it a goal every year to try and play in the Ryder Cup or Presidents Cup. As an American player, that's something which is really exciting and it's something of a challenge. To make those teams is really hard as there are so many great players. So for me, I have that goal every year to make these teams on merit. I've been selected in the past and one of my goals was to make the Presidents Cup team on points this year. The last two weeks were huge in earning my spot. I think everybody earns their spot to a certain extent, but I truly wanted to earn my spot by earning enough points to qualify for the team.

* Tony Finau is now a four-time winner and fans can watch him and the PGA Tour on Astro Golf Channel and GOLFTV powered by the PGA Tour.