Thursday, 28 Apr 2022 9:05 AM MYT By Praba Ganesan
Follow us on Instagram, subscribe to our Telegram channel and browser alerts for the latest news you need to know.
By Praba Ganesan

APRIL 28 — It rained yesterday evening. Which is quite normal and non-threatening, except nervous me had to head out to the city using the MRT.

Because I am on crutches following surgery on my right Achilles. However, I was quietly confident that once I get to the station, life would be safe. Further, on account of my injury, friends had picked an accessible restaurant from the destination station.

So, I told myself, just get to the station and everything will settle down quickly. Modernity is certain to save me inside one of the newest and modern train systems in the world. Under the careful watch of Prasarana and RapidKL.

Unfortunately, getting to the train station was the easiest part of the story. The rest is a cautionary tale. 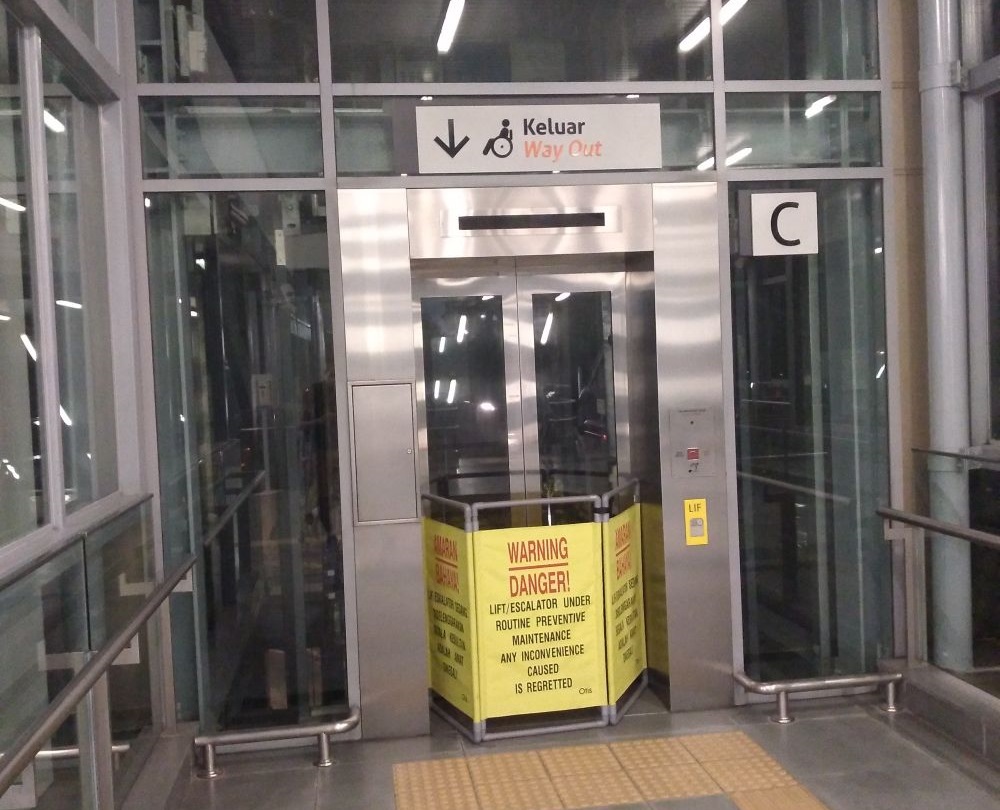 No way out or in for the wheelchair bound at MRT Taman Suntex. April 27, 2022. — Picture by Praba Ganesan

MRT Taman Suntex Station’s lift was inoperable. There were no other instructions available on how people with disabilities can access the trains without a lift. RapidKL does not want the solutions to the mysteries of life to be revealed prematurely.

Dropped off at the station's front entrance, I was confronted with two choices. The wet steps or the escalator. Morbid thoughts of falling down halfway on the long flight of stairs started to whirl in my head. It had a bright chance of occuring. The escalator then — which was better to get on, but not as easy to get off.

Putting your — only — good foot forward never meant more to me then that moment as I hopped onto the escalator. The anxious wait to reach the top and perform a proper dismount was on. One hand holding the crutches and the other held sideways to ensure balance at time of dismount.

It should not intimidate, a small hop from a rapidly — oops! — moving step onto the landing and maintaining a distorted Karate Kid “crane.” Until it dawns, a mistake means a fall and then the possibility the operated Achilles ruptures and the anchor sutures and screws come undone. 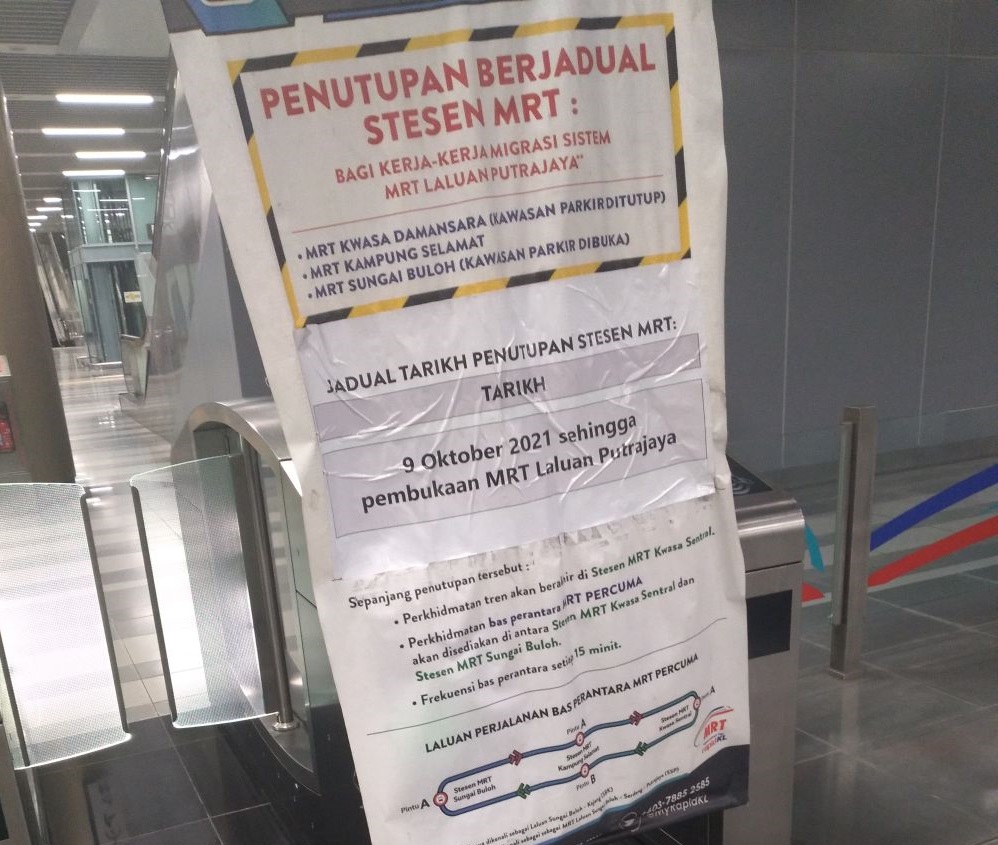 The spectre of a repeat surgery can rankle even an Olympic gymnast. There is no margin for error.

And I jumped. Successfully. Phew!

Passed the turnstile and up on the lift to the train platform.

Forty-five minutes later, at MRT Surian. If Kajang was a raw deal, the more upscale Petaling Jaya suburb was expected to be a superior experience.

It is stranger than fiction but the lift from the station to street level was out of service.

Two for two, the transportation gods were most certainly not in my corner.

Which meant, either I try to hop off the escalator or walk the lengthy distance utilising the connection bridge to the main building and get a lift -- wherever they chose to hide it.

All through the ordeal, with the CCTV and RapidKL employees present, no one was the least bit interested to approach a man in a cast and a pair of crutches to ask if he needed help.

The visual did not arrest enough and they are highly schooled about stranger danger.

The next few hours at the restaurant were spent chatting with my friends and keeping an eye on the adjacent station.

Surely, with a spate of station lifts crashing, RapidKL and Prasarana are on high alert to resolve the problem because above everything their attention remains the welfare of passengers.

Contractors would have been scolded into action and company lawyers prepping demand letters for corrections from those contracted to do their job.

It must be impossible that so many inside RapidKL MRT operations are indifferent. Surely not in our first-class capital city. In a fasting month where the masses are encouraged to consider the plights of the less fortunate, it cannot be the unfortunate case of a whole logistics management less bothered about immobile customers.

That would suggest incompetence, or worse an institutionalised indifference to incompetence.

As Malaysians are accustomed to, if the first half was torrid, the second would be torture.

MRT Surian’s ground level lift was not restored three hours later, and neither was MRT Taman Suntex’s lift over five hours later. In between, a bonus emerged. MRT Surian’s turnstile level lift to the platform heading to Kajang was also inoperable.

Is there a theory, with more broken down lifts the disappointment of customers would peter out? Surrender to a sense of despondence that it is the customer who is inflexible after being reminded from one station to another that management will not bother. Crazy customers, to then have the temerity to expect better.

I did have a direct encounter with a staff member when attempting to exit MRT Taman Suntex.

The turnstile doors closed prematurely after I tried to tap out with my travel card. A displeased staff member walked out of her control room and grabbed my travel card and asked her colleague to check the balance.

When it checked out, she came over and pointed crudely to exit using an out of service turnstile which had its disrepair covered by a promotional bunting. You cannot make this up!

There were no niceties — thank you, sorry for the inconvenience, these machines you know, hey! Don’t die using the escalator since the lift is still crocked — just the look of being annoyed that people bother her when she prefers to sit away from customers during her work hours as customer service officer.

Let’s close our eyes to the various leaks at the various stations wetting the floors so people up their aquatic skills, the non-working urinals covered with plastic bags as reminders art has no limits, the lack of soap or working dispensers and the absence of toilet seats for the disabled.

Because the list grows too long to be valid. Yes, that’s a thing too.

But no, RapidKL and Prasarana should not steal all the thunder. The greater compliment should be the disabled community who put up with the insane disinterest to their lives in their commute. To fight the urge to just attack customer service personnel with their wheelchairs. This is evidence they endure with superhero character. I just received a small dose of their pain.

This is not the first or the last time I remind RapidKL and Prasarana about their responsibilities and since this is presumably an election year and a quarter of Malaysia lives in the Greater Klang Valley, the politicians should get into the business of pretending to care. It’s good for vote gathering.

A former chairman of Prasarana was asked to leave because he displayed brazen disregard for victims of a train mishap and the general public who had to witness his train wreck of a press conference, last year.

Going by my limited experiences with our MRT system, it is highly likely his attitude was the norm and not the exception. They just happened to give him a microphone and pointed the camera at him.

They should do segments on the various people at various levels in Prasarana and RapidKL. It would upset but cannot fail to captivate. The collective indifference is world class.