Johor: A dress rehearsal for the general election

Thursday, 03 Feb 2022 10:27 AM MYT By Praba Ganesan
Follow us on Instagram, subscribe to our Telegram channel and browser alerts for the latest news you need to know.
By Praba Ganesan

FEB 3 — Political parties flock to Johor polls with Putrajaya — rather than the MB’s Nusajaya office — on their minds. Instructively, its 26 parliamentary seats — apportioned into 56 state seats — constitute 12 per cent of the Dewan Rakyat.

Therefore, the eventual result in the bellwether state reveals — far better than all kopitiam rumours — where the parties stand four years after GE14.

After two years of “new hope” — rudely trashed in Nightmare Alley — and two years of an uncertain at odds coalition, a report card is forthcoming.

A period where stability, solidarity, loyalty and honesty were copiously discarded wholesale by all parties — as they constantly study options, remain open to every ally and spend hours concocting ready-to-use excuses. But that’s for another day, today is Johor’s misfortune to be solely in the spotlight.

Unlike Melaka two months ago, a full parade is on the cards down south.

Barisan Nasional (BN), Perikatan Nasional (PN) and Pakatan Harapan find their battlefield fuller with Pejuang and the Muda-Warisan tandem turning it into a five-way warzone. Parti Bangsa Malaysia and other pretenders mull entry, to render it the most crowded state election since Sabah in October 2020.

What counts as success and how do the parties work through coalition dynamics which compromise ideology?

The Election Commission (EC) meets next week and polling should be during or before the first week of March. The answers will be quickly revealed.

BN has minimised complications in the coalition love game. Umno runs the show, MCA and MIC solemnly follow. Similarly in PN this time, as Johor is not a PAS focus state, it allows Bersatu to dictate. However, in Pakatan Harapan, parties are at loggerheads as PKR chose the party logo over the coalition’s for the polls.

Muda is determined to make it to the grown-up’s table this time after their initial chutzpah in Melaka came to nought, when they failed to field candidates. Curiously, how do they work with Warisan?

Both sides unendingly compliment each other even if they may at the end fail to complement each other. But more pertinently a clarity in the relationship is amiss. Warisan seeks to remove “Sabah” from its name to embellish its national identity but lacks the courage to enter the race. Every day they study the option without action they only dilute their expansionist theme.

The only major party going solo to the dance is Pejuang. With a forced twist. Mahathir Mohamad convalesces at home, and Mukhriz Mahathir leads the line with the intention to win the Malay vote in a state that sees itself as the most senior in Malayness.

Reanalysing the 2018 returns — to foretell 2022 — requires recalibration as both Bersatu and its splinter Pejuang were within the Pakatan family then, when the coalition yielded 36 of the 56 seats.

BN’s strongholds are in the east coast (parliamentary seats of Sembrong, Mersing, Tenggara, Kota Tinggi and Pengerang) where they swept nine out of 10 state seats in 2018. These will be ideal areas for Pejuang to establish their reformist agenda within highly Malay constituencies.

The Election Commission (EC) announced 1.2 million of those between the ages of 18 to 21 were added on January 16 to the electoral roll. But the overlooked part is the other 4.6 million above 21 keyed into the roll. The vast majority of them were people who never cared to register to vote. 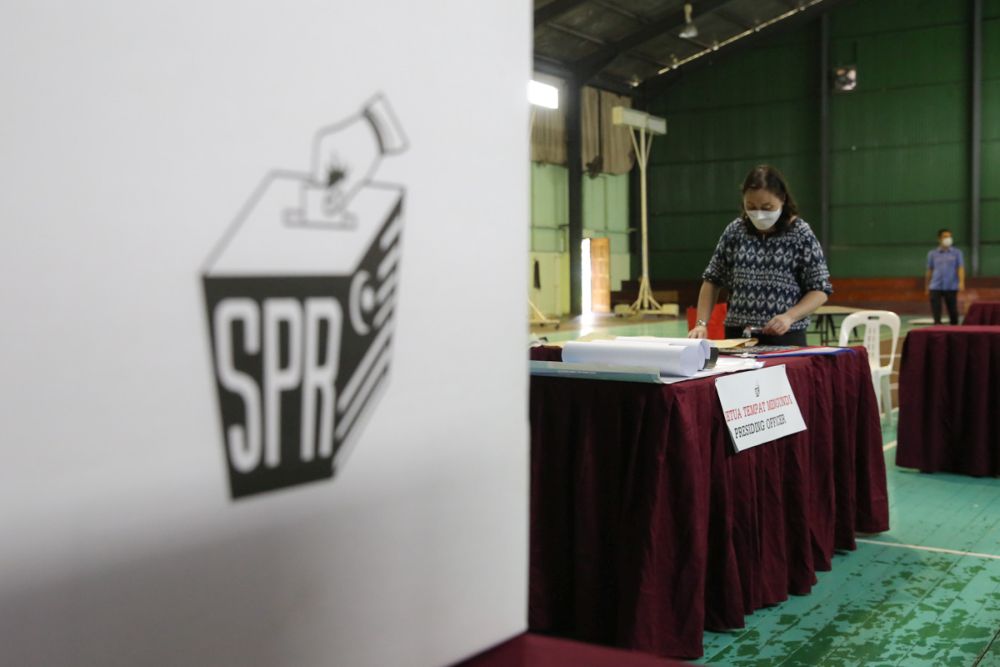 The Election Commission (EC) announced 1.2 million of those between the ages of 18 to 21 were added on January 16 to the electoral roll. — Picture by Yusof Mat Isa

These politically apathetic people now have the right to wake up on election day and choose to vote. A fair number of them are unaware they can vote.

With Johor to add more than 700,000 voters, an average of at least 10,000 new voters of all ages to every seat. The candidates, and their parties have to offer them a reason, probably different ones than they are used to dishing out to traditional voters.

Maybe even the medium to communicate has to be widened, and the language revisited in Johor leading to election day.

Bersatu only garnered two out of 28 seats in Melaka but the coalition PN ended with almost 25 per cent of the overall votes. One in four voters favoured the hybrid coalition.

With a crowded field, success cannot be measured by number of seats won only, but the total number of votes accrued.

For the newcomers to Johor, Warisan, Muda or Pejuang, they have to relay their numbers post-election to reassure national voters of their relevance. Any party to pass 200,000 votes across the state or 10 per cent of likely voters has a heartbeat.

A resounding BN win will bring forward the general election. The Umno Prime Minister Ismail Sabri Yaakob will get the order from Umno President Ahmad Zahid Hamidi if the party storms past PN, Pakatan and Pejuang. If.

This is the sternest test for Bersatu, a comprehensive defeat would push them to the brink. They have to outmuscle the rest in the “We love Malays More” race.  Umno, Bersatu, Amanah, PAS and PKR divided three ways complicated the Malay votes in 2018 and split the vote also evenly three ways.

Now, it is Umno, Bersatu, Amanah, PAS, PKR and Pejuang, split into at least four choices for the pro-Malay vote. Already this is dubbed as Muhyiddin’s Alamo, they have to establish the fight in the party even in defeat. If not, they stare down the barrel of the political gun.

Pakatan is not in great shape but in this election it must prove it has a shape of some sort and defend its urban base, despite intrusions from Muda and Warisan. Otherwise, deafening calls for a change of leadership cannot go unanswered in the aftermath of a Johor meltdown on polling day.

If the election ends up inconclusive, like the parliamentary majority now which props up the Ismail Sabri administration, then the slow boat to nowhere which is national politics will carry on indecisively until 2023 when term expiration forces the general election.

With an unremarkable BN facing off a defensive PN and volatile Pakatan, and two other groups presented to Johor voters as options, and the backdrop of almost 39 per cent increase in eligible voters, the outcome is far from clear.

Nothing in Johor will be straightforward, especially its election results.