#KeluargaMalaysia calls out for leadership

Thursday, 06 Jan 2022 8:41 AM MYT By Praba Ganesan
Follow us on Instagram, subscribe to our Telegram channel and browser alerts for the latest news you need to know.
By Praba Ganesan

Equally, it has continued to shape discussions among Tamils about what is family and what we owe it — the ones we are born into and the ones that we choose. How family drives most of our choices and irrevocably decides our fates.

Why the Kollywood tour? It dovetails splendidly to the spin gurus in Putrajaya reimagining our Prime Minister Ismail Sabri Yaakob’s administration.

This is year two of the Ismail Sabri era and it remains a struggle to dissect his #KeluargaMalaysia (Malaysian Family) platform without irony seeping out the surgery table and dripping onto the floor flooding our collective consciousness with his hubris.

Are we really a family headed by the prime minister? WWSD (What would Surya Do) with the situation?

Surya being Thalapathi’s protagonist. When asked to leave the slums to live with his new underworld don leader he begs away, for he feels beholden to the village which raised him since he was an abandoned toddler.

Later, he is caught between the truth about his real law enforcement family and him being the first line of defence for the criminal they hunt down.

He decides to stay the course and sacrifice himself to keep both adopted and biological families well.

It pulls emotions in all directions, and it denounces reason for love, which all of us regardless of our cinematic experiences would agree family is. A place of love, not opportunism.

It is messed up and everything at the same time. It defines us.

Which encapsulates Asian sentiment to family; it is dearer than life, even in these days of 5G rollouts. 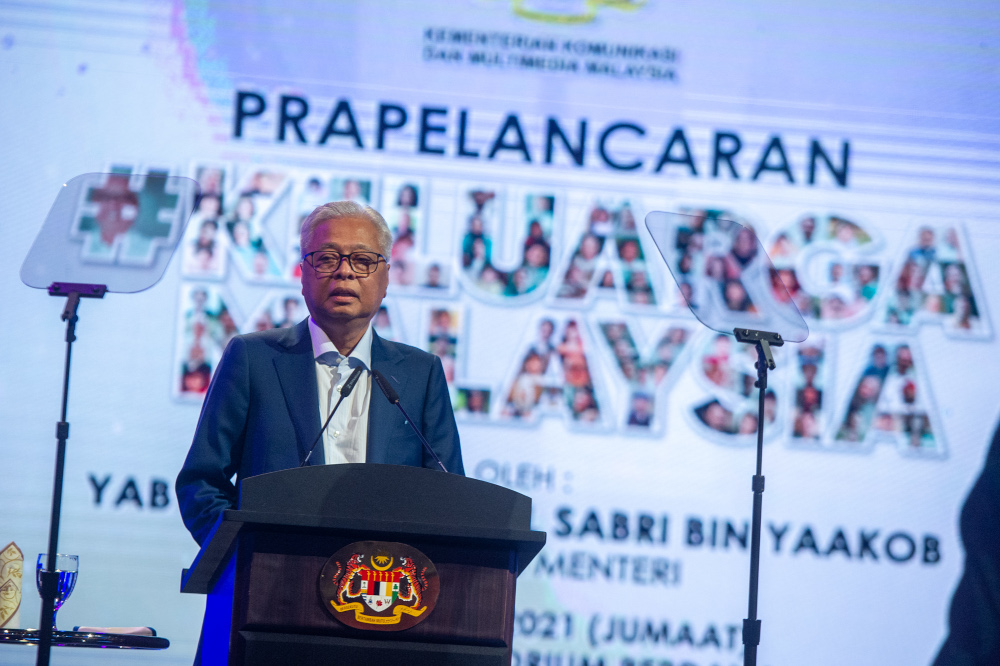 Thus, the PM’s #KeluargaMalaysia is a double-edged sword, not the least to him.

Admittedly, Ismail Sabri was shoved to the front due to Muhyiddin Yassin’s unceremonious “demise” in 2021. Picked by virtue of Cabinet seniority and Umno membership, and pressed from all sides, Ismail Sabri treads with caution.

But the office of prime minister is the most powerful in the land and given the power he had to forge his own survival and hopefully, pre-eminence over time. For that, he repeated the trick of every PM since 1981 — slogan, slogan, slogan till there’s success.

Following the long line of soundbites “government funds can buy” — Gemilang Malaysia, Malaysia Aman, #EndlessPossibilities, Satu Malaysia and others— his PR team intended to scorch all predecessors by going to the heart of Malaysia, before colour or religion — family.

It is immediately identifiable and at the same time objectionable. And certainly unattainable, with the way he governs.

Are we a family, and if so, does the prime minister lead the clarion call?

At this juncture one must resist nit-picks just to criticise the PM. But this is Ismail Sabri who felt the response to race fault-lines following a small phone theft in Low Yat was to create another race-prioritised electronic retail space, MARA Digital Mall. It failed even before it kicked off.

It is not that he failed with MARA Digital Mall or better pilloried as Low Yat 2, it is that he never tried to explain how he has matured since that debacle.

His sterile #KeluargaMalaysia pretends there is no past, just a future. That’s not how families work. Families are strong because of the past and this intended family of Malaysians must confront the uneasy past to navigate the uncertain future confident with the make-up of its own team. That we walk down this path together.

But that is too much to ask. Just look at the clearest recent instance — the 12th Malaysia Plan.

The new roadmaps announced last September — for poverty alleviation, social enterprises, national unity and so on and so forth — he says we are together and then just as suddenly re-emphasises we are not.

How can an Umno PM fail to say that Malays come first? Or to be clearer, Malay males from Semenanjung preferably from traditional Umno states sit on top.

Like the head of the family articulating, we shall all head out together with everyone being important, everyone but I will still keep Sulaiman happier, yes, Sulaiman.

But still everyone will matter, except Sulaiman gets first dibs. Nurul also matters, as long as she accepts Sulaiman’s place in the queue.

It is disingenuous to the hilt.

Which is fine, it is par for the course, for Umno, Bersatu and PAS, but to drag family into it leaves a bitter taste. Families are unconditional, not compromises out of realpolitik.

‘I have all my sisters with me’

It is not only possible but it is already here. Morphed into being despite our politicians’ best efforts to derail it.

This column already spoke about everyday Malaysians stepping up to give when Malaysia asks as in the ongoing floods. Us living together long enough, despite our cultural and language silos, has organically fostered national togetherness. It can be stronger, it could have been much, much stronger with better leadership, but nevertheless it has emerged to the surface.

Organic and imperfect, shouting out for a generation to pick up the gauntlet.

Enough Malaysians believe the country is one country, not a collection of interests.

Countries at the heart of it, seen at their core, are no more than concepts which grow with time. Malaysia was one of the most convoluted of concepts by distinctions of race, language divisions and geographical distances, at the start.

The best possible explanation, we stuck together long enough to be a substantial construct. Just like a fictional Surya who grew up in a foreign space long enough to develop an identity. Fictional but it resonates with us.

It is about investing in each other, and to see us in that large family. It has warts but it has crossed infancy.

So, to the initial question, but broken in two. Is there a #KeluargaMalaysia? Yes. Is it led by the current prime minister? A simple no. More than his limitations, he cannot stir himself to see things differently. A pity.

The baton needs passing. Not to the usual crowd. Those who understand family know it is always about sacrifice for each other.