OCTOBER 14 — When K.H. Lee looks back to the starting point of his golf journey, he can only marvel at how a twist of fate which saw him learn the game with a Ted Lasso-type swing coach has since led him to stardom on the PGA TOUR.

In May, Lee became the eighth and latest Korean winner on TOUR following his triumph at the AT&T Byron Nelson which cemented his rise to prominence. And it all began with an initial foray to the local driving range as a 13-year-old trying to lose weight following an initial tinker as a shot put athlete. 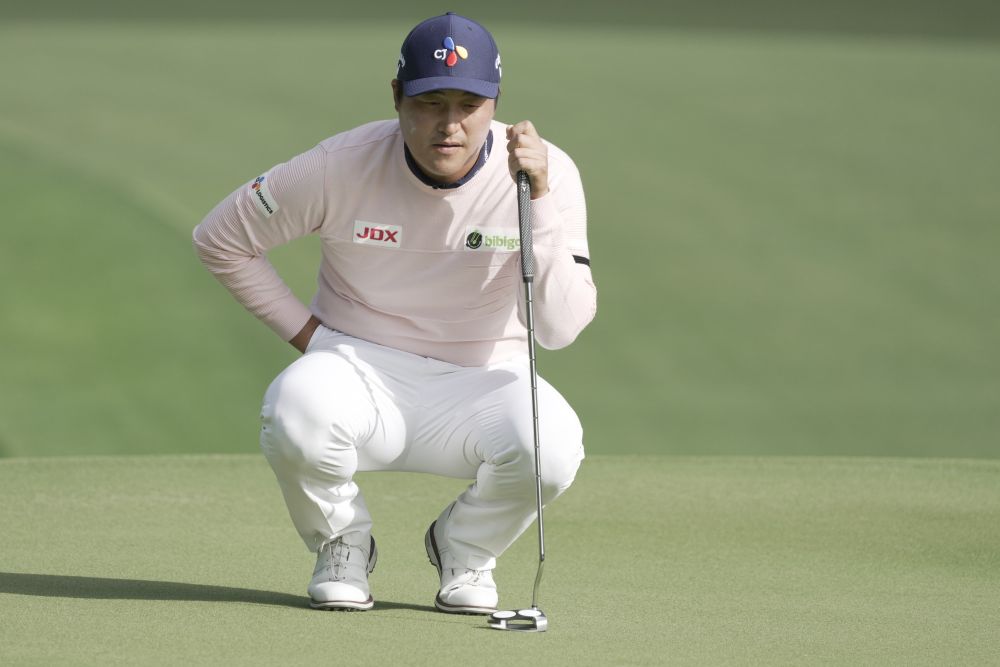 File picture shows Lee Kyoung-Hoon looking over the green on 8 during the first round of the Wells Fargo Championship golf tournament May 6, 2021. — Reuters pic

“My dad had a restaurant and next door was a driving range. I followed him for fun and eventually took lessons. My main motive was to go there and lose weight, but I never lost any weight,” laughed Lee, who tipped the scales at 212 pounds during his teens.

After being bitten by the golf bug, Lee found encouragement through the uplifting and inspirational ways of a local golf pro, whose teaching style can be likened to Ted Lasso, the fictional soccer coach starring in the self-titled sports comedy-drama streaming TV series.

“The reason I continued was the pro who was teaching juniors, and he kept giving me positive feedback about my swing. He was very encouraging and complimented me often and I felt good. That kept me going in golf and he bragged to others about me, and it made me work hard. I remember my mother was a violin teacher and she tried to teach me which did not go well. When she asked me to practice a piece 10 times, I haphazardly did it without any concentration. Golf was different. It was fun and I could go on for hours.”

Within a few years, Lee’s exceptional talents saw him being part of the gold medal Korean Team at the 2010 Asian Games in China, which exempts him from mandatory military service. He turned professional soon after and amassed two victories each on the Korean Tour and Japan Golf Tour from between 2012 to 2016. He subsequently took the big leap of faith to America and qualified for the Korn Ferry Tour in 2016 and two years later, three runner-up results saw him secure his dream PGA TOUR card which Lee cherishes, largely due to the sacrifices and support of his parents through the years.

“Like everyone else, my parents sacrificed a lot. They supported me with everything. They never told me to quit even when my game was not going well. My father wanted to be a baseball player, but his parents were against it. Since he could not do what he wanted, he decided to support his son, me,” said Lee, who is the only child.

“He encouraged me and helped in every way possible. He was there since the beginning. We would go abroad to practice every winter and he was my chauffer to tournaments. When my father was with me on the Korn Ferry Tour, he had a difficult time with the food. It was difficult to find a decent Korean or Asian restaurant in the countryside and I remember he had his tooth pulled out during one trip! They gave me everything they could, and I cannot sufficiently show my appreciation.”

Lee is now one the most jovial golfers on the PGA TOUR, and joked during an interview that he had two big goals in life – to become the No. 1 player in the world and the sexiest golfer alive. “When I won in May, my goals went viral as many golfers were amused by this story,” he said.

“Being sexy means to be a muscular guy. It’s in my dream but not quite possible in reality. I want to be muscular, but I enjoy eating so much. For example, I try not to eat dinner if I have a big lunch, but when dinner time comes, I am usually hungry again. I will work out hard, but I will eat hard as well.”

With this week’s THE CJ CUP @ SUMMIT in Las Vegas being a “home” game for Lee and the other 11 Koreans in the field – the tournament is being played outside its traditional home in Korea for the second straight year due to the pandemic – Lee hopes to hit the jackpot again to get his 2021-22 Season going. His form so far in the new 2021-22 season has been promising where he finished T15 at last week’s Shriners Children’s Open, also in Vegas.

“Last season was the best and I couldn’t be more ecstatic. It was my best year on the golf course, and we had a baby,” said Lee, who welcomed the arrival of his first child, a baby girl named Celine Yuna Lee, in July with wife, Joo Yeon Yu.

“I’m looking forward to the new season, and the goal will be to have another victory and getting myself into the top-50 in the world. Playing for Korea, representing the International Team in the Presidents Cup next year would also be a huge ambition. I’m trying to focus on winning and if I can get into the top-50, it would probably assure me of a spot in the Presidents Cup. I would be honoured beyond measure to represent my country,” added the Korean, who finished 31st on the FedExCup standings last season.

*Chuah Choo Chiang is senior director, marketing communications Asia Pacific for the PGA TOUR and is based in Malaysia.