Saturday, 24 Jul 2021 9:22 AM MYT By Aidil Rusli
Follow us on Instagram, subscribe to our Telegram channel and browser alerts for the latest news you need to know.
By Aidil Rusli

JULY 24 — Horror began life as (and probably still is) a less than respectable genre, associated too much with mindless scares, gore and violence that even normally perceptive film critics tend to miss out on the more cerebral and subversive portions of the genre.

So when a horror film does get critical acclaim, they’re usually singled out from the rest of the pack by using terms like “elevated genre” or calling them “smart” horror films instead of just accepting the fact that they’re just part of the horror genre.

Just take a look at the reviews for recent critical favourites like The Babadook, Get Out, It Follows, A Quiet Place, The Witch and Hereditary and I can guarantee that you’ll find the aforementioned words used in them.

With this much disrespect dished out towards the horror genre by the industry, it’s not a shock to see that big horror movie events are becoming increasingly rare beasts nowadays.

Outside of a new James Wan or Mike Flanagan film, a new movie in a horror franchise or a sequel to a hit movie, you won’t be able to find much marketing money and muscle used to promote a new horror flick to the extent that its release might feel like an “event”, the same way that a new Fast and Furious or Marvel and DC movie feels like an event.

So, much respect to Netflix for treating their release of the Fear Street trilogy of movies with that much care and smart planning, building up enough buzz to have the internet talking about it and cleverly releasing one movie every week so that people will be talking about it for at least three straight weeks.

Based on the already popular teenage horror fiction novels by R.L. Stine, which started in 1989, let’s hope that this is just the beginning of a beautiful new relationship! 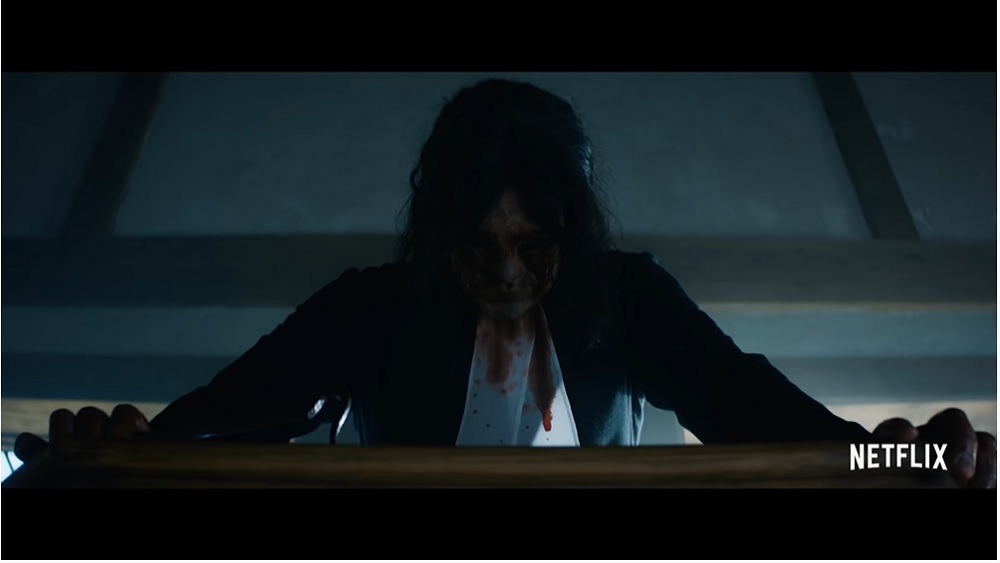 Having now seen all three films in the trilogy, which actually tells one story but spread out into three timelines, it’s just wonderful to witness the ways in which director Leigh Janiak, whose solid debut film Honeymoon didn’t even hint at this kind of versatility within horror’s many subgenres, pays tribute to some of those subgenres within these three films.

As hinted at by the year being mentioned in this film’s title, Part One is Janiak’s own riff on the hugely popular 90s slasher film formula, which became all the rage after the success of Scream.

It establishes the story of two towns, Shadyside and Sunnyvale, with the former being associated with losers and murderers and the latter being a town populated by your typical jocks and cheerleaders.

Our hero is Deena, who’s heartbroken when her girlfriend moves to Sunnyvale, who together with her nerdy younger brother Josh and her group of best friends, begins investigating the link between the never-ending series of murders happening in their town and a woman named Sarah Fier, who was reportedly executed in 1666 for being a witch.

Packed with all sorts of twists and turns (and cool rules surrounding the “curse” and “legend”) that more or less tries to make this movie a 90s slasher to end all 90s slashers, Janiak does not hold back when it comes to the film’s gore and violence, so even if the characters are kind of Stranger Things meets Goosebumps, the execution (pun intended) of the film is definitely true horror.

Towards the end of Part One, the audience will be presented with a story that links the events happening in 1994 to a similar series of murders that happened in 1978, and Part Two begins exactly where Part One ends in 1994 before going into flashback to tell the story of what happened in 1978 as it would’ve been told as a 70s and 80s slasher flick, specifically paying tribute to summer camp slashers like Friday The 13th and the Sleepaway Camp movies.

The story goes deeper here, and it’s here that we’ll finally find out the origins of that super cool axe-swinging killer from Part One.

It’s a much darker, and less fun film (in terms of clever, wink-wink jokes or references) than Part One, but it needs to be to properly convey the hopelessness and anger felt by this film’s main character Ziggy.

It all builds up beautifully into a climax where everything falls into place (and I definitely don’t want to spoil that for you), which sets things up for an even bleaker Part Three in 1666, where all of this began.

Depending on where you stand in the never-ending LGBTQ debate, your appreciation for Part Three and your tolerance towards the film’s first segment, which plays like a tribute to witch hunt movies like The Crucible, Witchfinder General, The Witch and most closely resembles this year’s The Reckoning in its very emotional melodrama about how witch hunts are basically tools used by the patriarchy to maintain power, will either be positive or negative.

I loved it, and felt every bit as infuriated by the events unfolding on screen as I did when I saw The Reckoning, but I can definitely guarantee that everyone will be cheering when the film’s second segment clicks into gear, going back to 1994 to conclude things with a glorious flurry of blood and goo.

But this triumphant ending wouldn’t have been possible without the meticulous set-up in Parts One and Two, which shows just how well-planned this trilogy is, not only in the conception and execution of the films themselves, but also in the promotion and release strategy.

Janiak has said that she hopes to make more of these movies for Netflix, and judging from the great fun that she’s delivered with this trilogy, I hope she gets her wish, soon!