What the corporate world lacks: Disincentives to BS

MARCH 12 — In a few weeks’ time, I’ll be attending a HR conference hosted in a 5-star venue, featuring more than two dozen highly experienced speakers sharing their views on seven or eight of the hottest topics related to training, talent development, etc.

Business card-swapping, networking, conversational learning, and kick-ass food — what could be more beneficial to the corporate eco-system?

Everybody learns, everybody makes new friends, everybody elevates their thinking and there’s a chance the companies involved will develop better and more effective workplaces.

What could be possibly wrong with all this? Well, quite a bit, actually.

What you don’t know will hurt you

There are a few things these conference brochures will not tell you. You certainly won’t hear this from the participants themselves, many of whom are in high and highly-paid corporate positions.

One, unless you’ve worked with some of the speakers themselves, you will not be aware of how much trouble they have caused to their own departments and staff.

The only knowledge you’ll have about the people on the panels are what the brochures and their public Linked-In profiles give you and the self-selected “recommendations” their peers have given them.

You know nothing else.

You don’t know about the time Mr A proposed changes to the Performance & Compensation workflow based on his absolute ignorance of how Oracle works.

You don’t know how Miss B, who was initially responsible for the training budget, cunningly tai-chi-ed accountability away at the eleventh hour to another department when the budget was almost wrecked.

You don’t know about how Dr C superfluously blamed and fired a long-serving training vendor for a drop in sales creating weeks of work to get a new vendor who couldn’t connect with the team at all.

You don’t hear about how Encik D was jealous because a certain manager in his department was getting a lot of positive attention, so he refused to sign her confirmation, citing a minor non-compliance.

No. The only thing your mind will be repeating to you, the only thing the brochures and fancy CVs will be telling you is how amazing those speakers in the forum are and how much they know.

It’s like meeting a potential boyfriend and being told only of his financial achievements and not the time he caused his entire family to suffer over his gambling addiction or, even worse, about his on-going train-wreck behaviour.

Every incentive to BS, no disincentive not to

The irony is amazing. Day in, day out people in offices bitch and complain about their superiors and how much trouble the heads are causing for the organisation.

But, lo and behold, when other heads of departments sit in a 5-star hotel and “share their ideas”, these same executives will listen carefully and take notes.

It’s like just because it’s a “conference”, we suddenly forget that the people on the stage have every motivation to talk in the most reckless manner possible.

Essentially, the hidden downside of such events is that they propagate risk to organisations without any penalties for the very people who have a) created problems in their own communities and b) continue to sprout impressive-sounding BS which create more complications than value.

In other words, speakers at a corporate conference have absolutely ZERO disincentive for offering the wildest and risk-producing advice to their salivating audiences.

These folks are basically given a free pass to spew as much as unverified nonsense as they can; in fact, many of these semi-VIPs have an incentive to align their advice to their own profit.

It’s like asking a meat-seller about what kind of diet is best for society.

The problem of corporate conferences (and how they encourage advice for which the adviser is 100 per cent non-accountable) is really an extension of the same problem in the corporate world.

We have managers and directors who are paid sky-high salaries to do basically nothing except issue commands with impunity.

If the process or situation improves, these people take the lion’s share of the credit; if it doesn’t, then hey maybe more changes need to be made and (usually) the fingers are pointed elsewhere.

And in the meantime, the downline has already been working their asses off.

Note that if it is the owner of the business issuing the directives, that’s fine. He’s the first who suffers when things fail.

Hence, they are less cavalier in their “process improvement” suggestions. But many senior directors are not owners.

Like Arsene Wenger, they are merely employees with — alas — the freedom to fail without consequence.

In domains like Sales & Marketing, this is less of a problem. Because in such areas, the numbers are all that matter.

You can only bullshit so much. Hence, as everybody knows, marketing managers come and go like mushrooms in the morning.

But in HR and “Talent Development”? There is practically zero risk to people who peddle themselves as “consultants” or “advisors.”

They have a licence to produce chaos with no penalties should things go south i.e. they put other people’s necks on the line, but they themselves have no skin in the game.

The chart below summarises the category of people in a (typical) office and the resulting risk they can produce for their company: 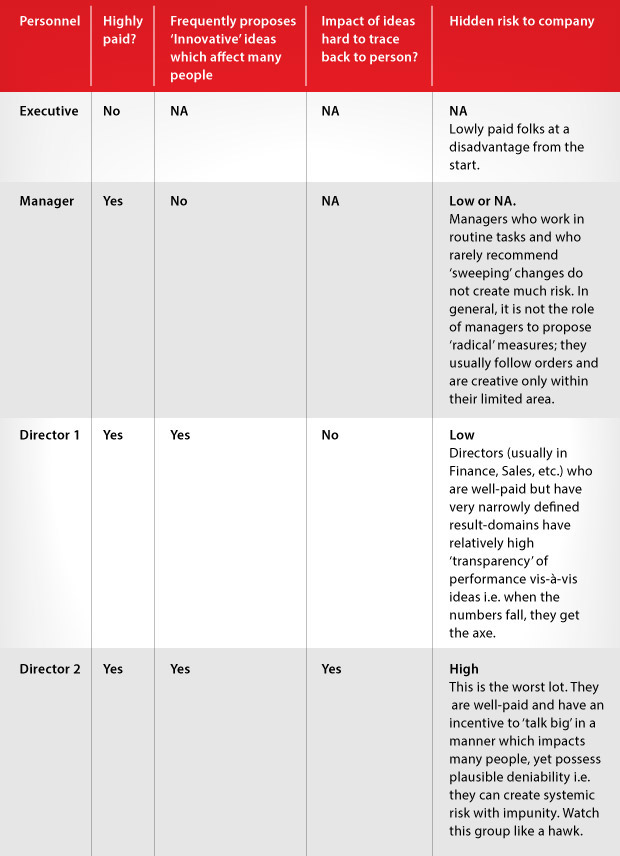 My (risk-free) advice to company owners is this: Ask yourself who among your top people fall into the last category, and begin thinking about disincentives to make casual sweeping recommendations.

Make sure these people do not talk like consultants who won’t suffer if the company does.

One of the simplest things to do is to simply “shadow” these folks and keep a tab on the kind of initiatives they are implementing.

Needless to say, a fair majority of high-profile folks speaking in conferences (see Note 1) fall into the “Director 2” slot.

No matter what happens, they are already (being) paid a handsome sum. And they are not going to be there when you fall — unless you pay more.

Note 1: To repeat, a huge exception would be conferences on sales, marketing or finance. Because these fields have very strict success metrics.

Again, it’s hard to bullshit if your revenue is falling. But conferences on HR, Management, Strategy, Learning, etc? Make sure you have your anti-BS cap on at all times. Yes, even for this article.