Malaysia is ready for Dyana 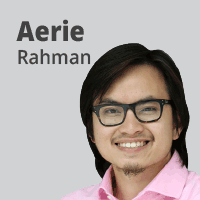 MAY 29 — It seems that nothing can stop Dyana Sofya’s meteoric rise. The cynic could cast aspersions that she is merely a DAP token. After all, the DAP is a predominantly Chinese party which has been trying to shake off this description.

The DAP needs to widen its support base in order to hold real power and not rely on the atavistic PAS or the fractious PKR. Dyana is Malay, young and from the affirmative action university, UiTM. It all fits the bill for the cosmetic change that DAP appears to desire.

But look deeper and one can see that Dyana’s story is something that most post-NEP Malaysians can relate to and identify with. And that makes her worth more tokens than one can spend at Genting.

Being a UiTM graduate is never easy. On one hand, some quarters would judge you (for the rest of your life, mind you) as being incapable of fending for yourself and always requiring crutches.

On the other hand, some sections of society would demand that you be forever grateful to those who established and continue to run UiTM -- the self-anointed protector of the Malays, Umno.

Either way, you’re screwed. From the moment you are labelled as a UiTM student, the label sticks and the stereotype ensues. In some cases, job applications are decided on this fact alone – which has nothing to do with one’s merits, by the way – and you are rejected even before you are given a chance.

People do not listen to reason. It’s more convenient to label you as a traitor than go through long-winded arguments that taxpayers' money belongs to the people instead of Umno. It’s also easier to label you as a UiTM student and assume that your command of English is like any Umno member's. Well, except for Umno’s de facto spokesman, Khairy Jamaluddin (KJ).

But with Dyana’s ascendancy, these stereotypes are being broken. She has the trust of the likes of the respectable Tony Pua and Lim Kit Siang. Her responses are sharp and sensible, which has bewildered most those who look down upon UiTM graduates.

Umnos blunt arsenal of mudslinging and smear campaigns are not working anymore. Whipping up an emotional frenzy by saying Dyana “bites the hand that fed her” is ineffective when Malaysians are smart enough to deduce that building UiTM does not give the license for one to adopt a permissive attitude to corruption.

In most households nowadays, you will find that the parents would unflinchingly support Barisan Nasional while their kids rally under Pakatan Rakyat’s banners. This phenomenon is due to the different social experiences that both generations went through.

The old guard lived during a time when Malaysia was going through some good times. The economy, fuelled by a huge reserves of oil, was booming. Many who studied overseas came back because they believed in the Malaysian project. The people at that time were much more tolerant of differences than they are now. There was hardly talk of hudud.

And the older generation owes it to BN for providing and protecting their interests, and accepted the consequences of this tragic pact. When Salleh Abas was unceremoniously sacked as Lord President, Malaysia was quiescent. You didn’t see large waves of street protests like in Reformasi or the Bersih rallies.

But the younger generation is more critical, more vocal and more demanding of their leaders. The politics of patronage constructed by BN must be relentlessly dismantled and it is not enough to dismantle it form within, as what people like KJ are deluding themselves into believing. And so, we fight and strive for a stronger opposition.

The change that we need

Dyana’s story is like ours. Her mother was a member of Perkasa and still remains in Umno, yet allows her daughter to pursue her own causes, much like Dr Mahathir. And Dyana pursues her causes with vigour, much like most youths who flood the streets of KL and Dataran Merdeka, demanding for changes that our parents’ generation can only dream of.

The irony is not lost when BN, being tied to coalition compromises, is forced to field in the veteran Mah Siew Keong from the increasingly irrelevant Gerakan party. The banal taglines of “experience” and “maturity” are his battlecry.

These are old and unoriginal ideas that BN employ. The most potent would be fear. And this is something that the likes of our Home Minister Zahid Hamidi is fond of doing.

But Mah, like his coalition, is becoming surplus to requirements. The nation is moving forward and is welcoming new leaders whose outlook is more progressive. We don’t fear these new leaders, instead, they are the ones who rightfully fear us, like in any functioning parliamentary democracy.

I may disagree with Dyana’s suggestion of setting up a university for non-Bumiputeras (which is a silly idea, by the way), but I can rest assure that she will not find a way to charge me with sedition for the crime of dissent.