Perkasa, power and the manufacture of consent

Friday, 03 Jan 2014 7:43 AM MYT By Aerie Rahman
Follow us on Instagram, subscribe to our Telegram channel and browser alerts for the latest news you need to know.
By Aerie Rahman

JAN 3 — The shadow of far right sentiments is cast wide with the Barisan Nasional government endorsing the ultra right wing movement Perkasa. The admission by Perkasa’s secretary-general Syed Hassan Syed Ali that it receives funding from Putrajaya is unsettling for freedom-loving members of this society.

Taxpayers’ money, which is supposed to be used to advance the rakyat’s interests, has been unscrupulously utilised to prop up Perkasa as BN’s proxy to forward the cause of Malay supremacy.

Judging by Perkasa’s antics and their refusal to participate in dialogues on contentious issues with other members of civil society, BN’s material support smacks of state sponsored anti-intellectualism.

This revelation has left me puzzled as to the criteria that the government employs to allocate resources to NGOs. Aren’t Perkasa’s aims inconsistent with the national agenda of 1 Malaysia and national reconciliation? Do other NGOs who are premised on different values such as Sisters in Islam or SUARAM, qualify for funding then?

The rising tide of right wing movements around the world, with spearheads like Marie Le Pen and Geert Wilders, is disturbing enough. Yet, they do not receive direct funding from their respective governments of the day.

Perkasa has the freedom of expression and association, and I sincerely hope that they do respect mine in turn, but giving taxpayers’ money to boost the support of one extreme end of the political spectrum is damningly iniquitous.

The genesis of Perkasa 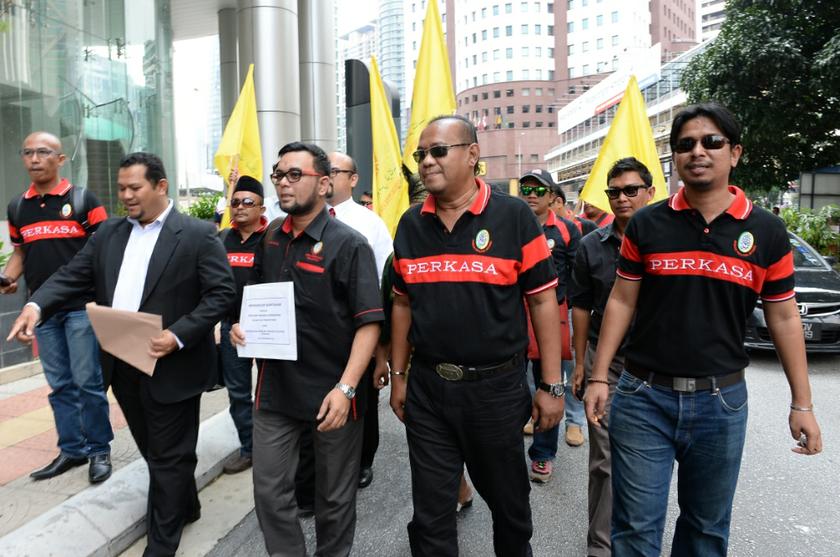 Pertubuhan Pribumi Perkasa Malaysia was established in September 2008 in a ceremony which was sanctified by former prime minister Mahathir Mohamad. This was the prime minister who claimed to espouse the Bangsa Malaysia concept.

The timing of Perkasa’s birth is crucial. It was formed after the 2008 election tsunami which significantly benefitted the PR alliance to BN’s detriment.

For them, Umno’s hold on power translates into the ethnocentric concept of Malay supremacy.

Perkasa’s raison d’être is to return Malaysia to the former status quo where the Malay grip on power was paramount.

In these apprehensive conditions, these people believe that the only way to re-assert Malay political dominance is by using a more aggressive strategy. As the Pak Lah administration’s progressive concessions yielded little political mileage, the lemah lembut Malay was replaced by the confrontational Malay, armed with the resilience to lodge an endless number of police reports.

BN, despite the cute statements spewed by its members, is not stupid. It is a skillful player in asserting what Antonio Gramsci in The Prison Notebooks, calls “hegemony.” Dominance and hegemony are two distinct things. While dominance solely employs brute force to coerce the people to submit to the party’s will, hegemony is more subtle.

Architects of autocracies and designers of dictatorships would be wise to take a leaf out of BN’s political machinations.

Hegemony is a mixture of consent and coercion. The state adroitly employs cultural capital to lull the people into a situation where life is content and the people need not fight for change. Associations, institutions, superstructures etc are hegemonic structures where civil society operates to keep one occupied and have little time for protest or action.

All these years BN has utilised BR1M, subsidies, PR agencies and money politics to manufacture our consent. Just recall the pseudo-reformer Pak Lah with his “don’t work for me, work with me” bullshit.

Yet, BN never hesitates to use force to guarantee conformity: Ops Lalang, the sodomy of the judiciary in 1988, the victimisation of Anwar Ibrahim and during Pak Lah’s time, the Allah issue and the usage of the ISA against a journalist.

They have added a new weapon to their arsenal: social movements in the form of Perkasa and various other Muslim NGOs.

A nation beholden to a minority

James Madison in The Federalist Paper No. 10 famously argued that a Republic, which consists of elected representatives, in contrast to a purely direct democracy, was able to mitigate the scourge called the tyranny of the majority. This is where a minority would be constantly outvoted due to their numerical inferiority.

Madison postulated that it was human nature to band together into factions (associations) and to prevent the crushing of one faction over another, a Republic is propitious to moderate the competing claims.

Little did Madison know that the minority in the form of special interest groups would be able to penetrate and bend the will of elected representatives to serve their own interests. Case in point would be the pro-gun lobby group the National Rifle Association (NRA).

Despite innumerable gun-related tragedies, from the Columbine massacre to the heartbreaking Newtown killings, the NRA’s grip on Congress is unshakeable. The will to institute gun control is there among the American public but NRA’s tentacles are deep in the corridors of power.

Capable of marshalling rallies and more importantly, cut essential funding for Congressional elections, Congressmen are at the mercy of the NRA. The noisy minority ends up coming on top.

The situation in Malaysia is a little different. Perkasa does not fund BN, it works vice versa. But Perkasa has leverage. BN, Umno in particular, is fully aware that Perkasa’s sentiments are shared by a substantial portion of Malaysians. As such, by supporting Perkasa, it is able to win the support of this segment of society.

Perkasa is clever in positioning itself as the last bastion of Malay power. By affirming an extremely rightist stance, Perkasa has pandered to the moral sentiments of a segment of Malay society that lives in a siege mentality.

Just like how a good cop and a bad cop effectively coaxes a suspect to squeal vital information, this is exactly what the BN-Perkasa partnership effectively does to the rest of Malaysians.

BN, under Najib, with the assistance of elitist consultants tries to present itself as the more rational, approachable and reasonable party. After the rakyat has been faced with a vicious mauling by Perkasa, BN would appear on the stage with prescriptions that would appear somewhat palatable.

Perkasa’s existence appears to be welcomed by some portion of society. Just ask the 30,000  people of Shah Alam who threw their lot in with Zul Noordin. Most conceded that Perkasa’s tactics are uncouth, but reasoned that it is necessary to gertak the other races so as to not take advantage of the Malays—whatever that means.

The tacit support that Perkasa receives is disconcerting. Thus, it is comforting to know that the people of Shah Alam and Pasir Mas rejected Zul Noordin and Ibrahim Ali respectively in the last general elections.

Barisan Nasional’s pace is slower than society’s march (the 52 per cent at least). I suggest they keep up or get left behind.