Datuk Seri Najib Razak leaves the Kuala Lumpur Court Complex, March 24 2022. — Picture by Devan Manuel
Follow us on Instagram, subscribe to our Telegram channel and browser alerts for the latest news you need to know.
By IDA LIM

KUALA LUMPUR, March 24 — Former prime minister Datuk Seri Najib Razak did have the powers to stop 1Malaysia Development Berhad (1MDB) from recovering funds from a US$3 billion bond that had been sent overseas, but did not exercise his powers to do so, a witness confirmed in court today.

Former 1MDB director Tan Sri Ismee Ismail said this when testifying as the 13th prosecution witness in Najib’s trial, where the former prime minister is accused of having received more than RM2 billion in 1MDB funds in his bank account.

In this trial, Najib is alleged to have ultimately received more than RM2 billion that originated from the US$3 billion bond.

In a now-aborted joint venture between 1MDB and Aabar Investments PJS Limited (now known to be a fake company with similar names to an actual Abu Dhabi firm), the two companies were supposed to put US$3 billion each into the joint venture company known as Abu Dhabi Malaysia Investment Company (Admic).

In seeking to raise the US$3 billion, 1MDB GIL had taken on debt by issuing the US$3 billion, but ended up only receiving US$2.7 billion on March 19, 2013 as the rest were for fees paid to the bond’s arranger Goldman Sachs.

By March 22, 2013, 1MDB GIL’s bank account only had a balance of about US$129.3 million, as money flowed out of the company without the 1MDB board being notified, including for purported “investments” in three fund companies which are now all linked to fugitive Low Taek Jho or Jho Low.

The prosecution had on the first day of Najib’s trial said it would show that from the US$2.721 billion in 1MDB GIL’s account, that over US$1 billion was paid out to two companies (now linked to Low) before being passed around and with huge sums eventually reaching Low’s associate Eric Tan’s company Tanore Finance Corporation which by March 25, 2013 had US$890 million. The prosecution had also said it would show that Tanore had between March 21 and April 10, 2013 transferred US$681 million (RM2,081,476,92) to Naijb’s account.

Hariharan today asked if the 1MDB board took any steps to recover the funds after finding out that a huge portion totalling over US$1.5 billion of the US$3 billion bond had been diverted to companies unrelated to the joint venture, with Ismee then saying he recalled the 1MDB board instructing the 1MDB management to bring back the funds.

Ismee said he recalled that this was when 1MDB knew it required funding for its Tun Razak Exchange (TRX) property development project, confirming that Najib was still the prime minister then when the board requested the management to bring back the money for the TRX project.

Hariharan: Did Datuk Seri Najib in his capacity as representative of Ministry of Finance or the shareholder ever stopped or prevented the company, in particular the board, from pursuing to recover the money or to repatriate the money?

Noting that the prosecution’s allegation was that Najib had received a huge sum of money totalling around US$680 million somewhere between March 22 to April 2013, Hariharan asked if Najib as the prime minister has the absolute power under Article 117 of 1MDB’s company constitution to make financial decisions for 1MDB such as stopping the repatriation or recovery of 1MDB funds, with Ismee then replying “yes”.

Hariharan: He could always exercise that power and said do not go for repatriation, do you agree with me?

Hariharan: Do you recall in fact Datuk Seri Najib requested for it to be repatriated?

Ismee: I’m not sure whether it is the same meeting, there was a meeting attended by myself and (1MDB chairman Tan Sri Che) Lodin (Wok Kamaruddin) at the residence of Datuk Seri Najib, I think the outcome, consensus of that meeting is to bring the money back.

Hariharan also noted the minutes of a 1MDB board meeting on April 22, 2014 where then 1MDB chairman Lodin had mentioned the company’s shareholder’s instruction for the US$1.58 billion of the US$3 billion bond that were diverted to unrelated entities in Cayman Islands to be brought back to Malaysia as soon as possible. 1MDB’s shareholder was the Finance Ministry-owned Ministry of Finance Incorporated, and Najib was representing the shareholder as finance minister then.

Hariharan: Even after almost a year — because the allegation is in March 2013, Datuk Seri Najib allegedly received the money, that is the prosecution’s allegation — but one year and one month, 13 months after that, the shareholder being Datuk Seri Najib requested, insisted in fact for the monies to be repatriated. Do you agree with me?

Hariharan also sought to highlight the minutes of a 1MDB board meeting in June 2014 where the board chairman was recorded as saying that 1MDB’s shareholder had repeated its instructions for the company to bring back the funds in Cayman Islands, and again suggested that Najib at that point as both the finance minister and prime minister could always exercise his right as shareholder or under Article 117 to prevent the recovery of the funds.

Asked by Hariharan if he agreed that it was always Najib’s intention to have the funds repatriated based on these documents, Ismee briefly replied: “and the board”. 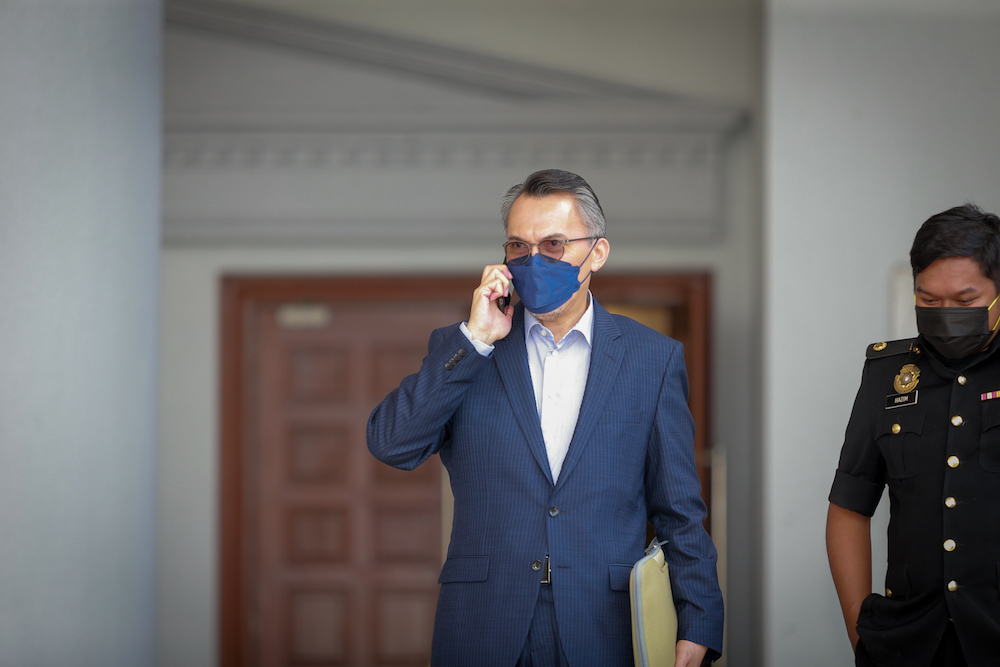 Hariharan today also sought to distinguish or differentiate between Najib’s signed approval of 1MDB decisions through 1MDB’s shareholder resolutions as the finance minister, as well as written approval as prime minister for major 1MDB decisions under Article 117.

Article 117 of the M&A states that the prior written approval of the prime minister was required for any amendments to the M&A, for the appointment and removal of the company’s directors and senior management team.

Even as Hariharan suggested that these were two different documents, Ismee today replied: ‘I understand, but the prime minister, finance minister and chairman of board of advisors is the same person.” Najib was holding all three positions at that time, including as the chair of 1MDB’s board of advisors.

Ismee had previously testified that 1MDB directors including him would not question much when asked to sign on 1MDB board decisions via directors’ circular resolutions, during times when they were also shown shareholders resolutions that had already been signed by Najib. Ismee had said this was even though the actual process should be the board signing its approval before Najib signed, as the latter’s signature would indicate that the resolutions had already been approved by the “highest quarter in 1MDB” namely Najib.