Datuk Seri Najib Razak arrives at the Kuala Lumpur High Court Complex September 15, 2020. — by Yusof Mat Isa
Follow us on Instagram, subscribe to our Telegram channel and browser alerts for the latest news you need to know.
By IDA LIM

KUALA LUMPUR, Sept 15 — A US$3 billion debt that 1Malaysia Development Berhad (1MDB) had taken on in 2013 was not used for a joint venture with Abu Dhabi to carry out investments as originally intended, but was instead used to pay off the company’s debts and even to buy land in Penang which featured in Datuk Seri Najib Razak’s election campaign speech, the court heard today.

Mohd Hazem also claimed that Low Taek Jho — whom he has described as Najib’s trusted right-hand man, proxy and middleman for 1MDB affairs — had told him some of the money raised from the US$3 billion bond would be used for elections.

“Jho Low told me that these funds have to be expedited because these funds will be used for the purposes of elections and to pay a Standard Chartered loan that was borrowed to pay for Petro Saudi investment.

“The funds from the issuance of this bond was also used to buy land in Ayer Itam in Penang as an initiative of Umno in campaigning for the elections.

“When Datuk Seri Najib was campaigning in Penang, he had said in a ceramah of his that this land that is purchased will be developed by 1MDB to build affordable housing in Ayer Itam, Penang,” he told the High Court today.

Najib’s defence lawyer Wan Aizuddin Wan Mohammed then stood up to record the defence team’s objection to Mohd Hazem’s testimony on the basis that these amounted to alleged hearsay, as Low would not be available in court as a witness to be questioned on whether he had said those matters.

But when asked by deputy public prosecutor Mohamad Mustaffa P. Kunyalam on how he had known of what Najib said while campaigning in Penang for elections, Mohd Hazem said he was personally present at the event where Najib spoke about the Penang land.

As for how he knew that some of the US$3 billion bond was used to pay for the Ayer Itam land, Mohd Hazem said he has personal knowledge of this. 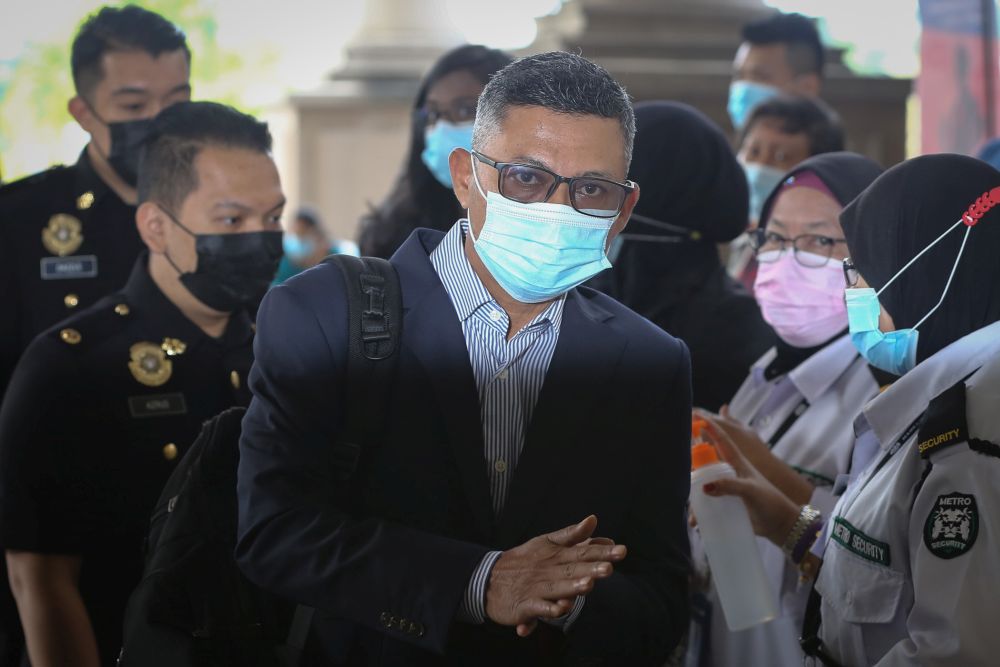 Yesterday and even today, Mohd Hazem had repeatedly highlighted of how he was told by Low that 1MDB was allegedly formed to help Umno and to generate funds for Umno, as well as how Low had rebuffed Mohd Hazem’s attempts to seek for the return of 1MDB’s funds purportedly existing and locating overseas by saying that such monies were Umno funds.

Instead of getting US$3 billion in full from the bond that it had issued in March 2013, 1MDB GIL had eventually only received US$2.721 billion as it had to pay a very high fee of 9.3 per cent of the funds raised to the bond’s underwriter Goldman Sachs, Mohd Hazem said.

Based on his knowledge up until he left 1MDB, Mohd Hazem said that he knew that some of the funds in 1MDB GIL account were used in mid-2013, including to buy the Ayer Itam Estate Lands in Penang at around RM1 billion, repay borrowings from Standard Chartered at around RM2 billion and possibly also other costs to repay the interests of other borrowings.

But Mohd Hazem said the 1MDB board had never discussed or approved using the funds from the US$3 billion bond for such purposes including to pay debts, noting that the board had only agreed on using the funds for investment in a venture called Admic and for the Tun Razak Exchange project.

The US$3b bond’s original purpose and the hasty process

However, Mohd Hazem said the US$3 billion bond was originally intended for 1MDB to inject into a British Virgin Islands-based joint venture company Abu Dhabi Malaysia Investment Company (Admic) formed on March 5, 2013, with joint venture partner Aabar Investments PJS Limited (now said to be a fake company with similar name to an actual Abu Dhabi company) to put in US$3 billion cash as well.

The funds were intended to be used to fund 1MDB’s real estate development Tun Razak Exchange (TRX) in Kuala Lumpur.

As for 1MDB GIL which was used to issue the US$3 billion bond, it was established on March 8, 2013 in the British Virgin Islands and papers to open its bank account in BSI Bank in Lugano, Switzerland were signed on March 11, 2013.

Mohd Hazem also confirmed that the Finance Ministry had in a May 9, 2013 letter informed 1MDB that the Cabinet meeting on March 13, 2013 had decided that the government would through the Finance Ministry issue a letter of support for the US$3 billion borrowings. Yesterday, Mohd Hazem said the US$3 billion bond would not have materialised without the Malaysian government’s letter of support, which he said was equivalent in effect to a government guarantee as the government would have to bear the debt if 1MDB could not pay up.

Stating that he had no access and control over the US$2.721 billion that was deposited in 1MDB GIL’s account even as 1MDB CEO and as 1MDB GIL director, Mohd Hazem said he had requested Low several times for the funds to be brought back to Malaysia to pay for 1MDB needs but said Low had refused by allegedly saying those funds are for Umno.

Throughout his tenure up until his resignation on January 5, 2015 as 1MDB CEO, Mohd Hazem said that none of the funds raised from the US$3 billion bond was channelled to the Admic joint venture or to the TRX project, adding: “This clearly breaches the bonds issuance’s objective that was agreed to by the 1MDB board.”

He noted that the Admic joint venture bid later became abortive as both 1MDB and Aabar did not inject funds of US$3 billion each into the company as originally planned, now describing this as a “camouflage” to portray a legitimate joint venture and as a trick to legalise the US$3 billion fund-raising exercise.

As a result of the US$3 billion fund-raising exercise, 1MDB GIL had to bear losses to make interest payments for the bond while no strategic investments were conducted, while the Malaysian government would ultimately have to bear the burden as it had issued a letter of support for the borrowings, he said.

Mohd Hazem said 1MDB general counsel and Low’s associate Jasmine Loo had said 1MDB GIL’s funds would be invested in three funds named Devonshire Capital Growth Fund, Enterprise and Cistenique to be managed by fund manager BSI Bank Singapore, but said he was not involved in the transactions that used 1MDB GIL funds to be placed overseas.

On the first day of the trial, the prosecution had said it would show that more than US$1 billion of funds from the US$2.721 billion in 1MDB GIL’s accounts were channelled out to two funds that went through companies controlled by Low’s proxy Eric Tan with US$681 million allegedly eventually ending up in Najib’s account.