KUALA LUMPUR, May 20 — The over US$2.7 billion deposited in a 1Malaysia Development Berhad (1MDB) subsidiary’s bank account in March 2013 dwindled to just US$60,000 within months, with the funds flowing to various companies including those now known to be controlled by fugitive Low Taek Jho and his associates, the High Court heard today.

Mohd Hazem Abd Rahman, the chief executive of 1MDB from March 2013 to early January 2015, confirmed in court that he did not inform the 1MDB board of the status of the funds in the bank account, including when its balance fell to just around US$60,000.

Mohd Hazem said this while testifying as the 10th prosecution witness during the trial of former prime minister Datuk Seri Najib Razak, who is facing 25 charges involving alleged power abuse and money laundering in relation to more than RM2 billion of 1MDB funds.

Najib’s lawyers today focused on 1MDB’s subsidiary 1MDB Global Investments Limited (1MDB GIL), which had raised US$3 billion in March 2013 for a joint venture between 1MDB and Aabar Investments PJS Limited (now said to be a fake company with similar names to an actual Abu Dhabi firm). Both 1MDB and Aabar were supposed to put in US$3 billion each into the joint venture company Abu Dhabi Malaysia Investment Company (Admic).

On March 19, 2013, 1MDB GIL received over US$2.7 billion from the US$3 billion funds it had raised by taking on debts through its issuance of a bond, as the remaining was paid to the bond’s arranger Goldman Sachs.

Yesterday, Mohd Hazem confirmed in court that 1MDB GIL’s bank account that initially had more than US$2.7 billion on March 19, 2013 only had a balance of about US$129.3 million on March 22, 2013, following outflow of funds that did not have the approval of 1MDB’s board or 1MDB GIL’s board of directors via board resolutions.

Under cross-examination today by Najib’s lawyer Wan Aizuddin Wan Mohammed and through reference to minutes of 1MDB board meetings in 2013 and early 2014, Mohd Hazem repeatedly confirmed that he had failed to notify the 1MDB board in multiple board meetings of the status and dwindling amount of the 1MDB GIL funds that were raised specifically for the Admic joint venture.

For example, Wan Aizuddin referred to the minutes of 1MDB’s board meeting on December 9, 2013 which Mohd Hazem had attended.

Mohd Hazem agreed today that the 1MDB board was “genuinely interested” in seeing progress in the 1MDB-Aabar joint venture Admic as they had asked for updates in the previous meeting and this meeting, further confirming that the December 2013 meeting’s records showed that he had told 1MDB directors that no investment had been made by Admic.

Citing 1MDB GIL’s bank account’s statement, Wan Aizuddin asked: “You would agree as of the board meeting on December 9, 2013, the balance in 1MDB GIL’s account was just a mere US$60,000?” Mohd Hazem confirmed this.

Wan Aizuddin: And this is astonishing, from US$3 billion or even from US$2.7 billion, it has come to US$60,000, and this was never mentioned to the board?

Mohd Hazem similarly confirmed that 1MDB’s then chief financial officer Azmi Tahir in the same board meeting also never mentioned the amount of the balance in 1MDB GIL’s bank account or the whereabouts of the US$3 billion that was raised.

Previously Mohd Hazem had testified that none of the US$3 billion funds raised was channelled to the Admic joint venture which later became abortive, as both 1MDB and Aabar did not inject funds of US$3 billion each into the company as originally planned.

He previously testified that 1MDB GIL had to bear losses to make interest payments for the US$3 billion bond while no strategic investments were conducted, while the Malaysian government would ultimately have to bear the burden as it had issued a letter of support for the borrowings. 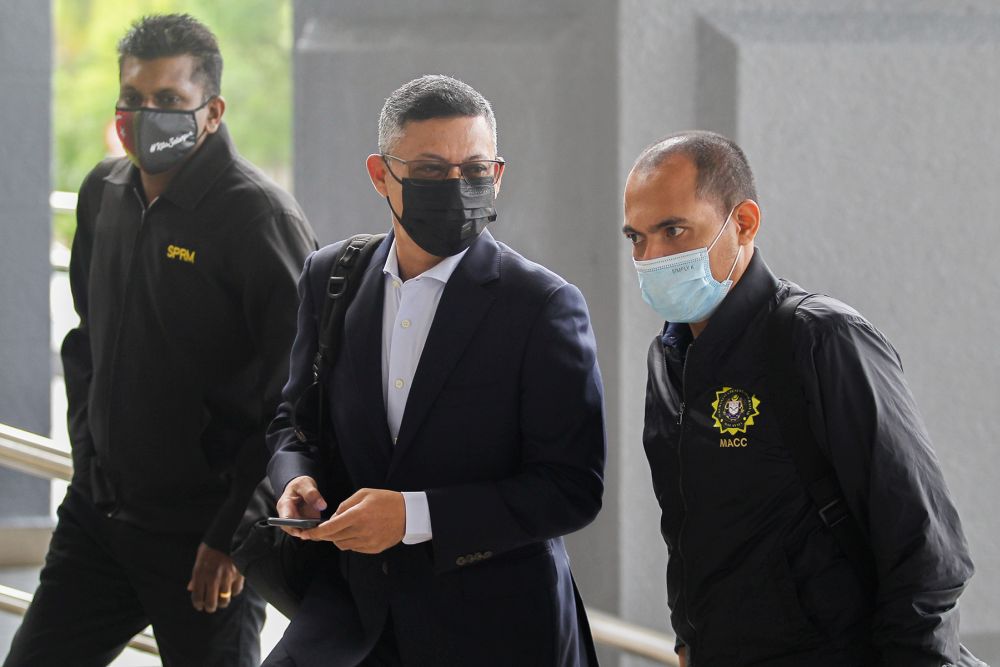 Other 1MDB board meetings

While the 1MDB-Aabar joint venture was signed on March 12, Mohd Hazem said he did not put much effort into pursuing updates on the joint venture as a large part of the communication was handled by 1MDB then general counsel Jasmine Loo.

He also said he did not really ask Loo to pick up the pace to follow up on the investing of funds in the Admic joint venture between March 2013 and May 20, 2013 when the 1MDB board met, as said he knew by then that the joint venture was not a serious deal.

When asked why he did not inform the 1MDB board of his suspicions about the joint venture, Mohd Hazem said he shared most of his concerns to the board on an off-record basis, but also agreed that “technically” he should have put it on record as it involved US$3 billion of 1MDB’s monies and a purported government-to-government effort between Malaysia and Abu Dhabi.

Mohd Hazem however also said the 1MDB board was previously notified in an earlier meeting that the funds raised would be invested in funds, and insisted that “the board knows that it will be placed”.

He agreed it was “necessary” for the 1MDB board to be informed of what investment portfolio the US$3 billion funds raised would be placed in and the parameters and nature of such investment, but confirmed that such information was not told to the board by May --- which was two months after 1MDB GIL received the funds.

While Wan Aizuddin suggested that he had not informed the 1MDB board during an August 19, 2013 meeting that 1MDB GIL’s bank account by then only had about US$10 million left, Mohd Hazem said he did not know this was the balance then.

By the next board meeting held about two months later on November 11, 2013, Mohd Hazem had informed the 1MDB board that there was no development on the proposed Admic joint venture, explaining today that there was “no communication or reaction” from Aabar on this matter.

While he regularly met with Aabar CEO Mohamed Badawy Al Husseiny on meetings for other matters, Mohd Hazem today reiterated that it was Loo who was handling communications with Aabar on their required pumping in of their own US$3 billion portion into the Admic joint venture.

However, Mohd Hazem agreed he would have the opportunity to personally ask Mohamed Badawy about Aabar’s own US$3 billion portion but that the failure to followup was purely due to his “inaction”, saying that this was “because I know there was no interest by Aabar”.

Asked how he knew Aabar had no interest to pursue the joint venture worth US$6 billion with 1MDB, Mohd Hazem said “I can tell”, further explaining that this was shown over the lack of action by Aabar for months.

“I would have known whether there is a clear plan of Aabar trying to raise the money. Now it’s November 2013, if they wanted to raise the money, they have the capacity to raise it, they would have raised it before,” he said, agreeing that he did not do anything to pursue the joint venture but only notified the 1MDB board of the lack of development.

He replied in the affirmative when Wan Aizuddin asked: “You just entertained that thought in your head, since they are not raising the US$3 billion as required, you just left it at that?”

As for 1MDB GIL’s funds, Mohd Hazem confirmed he did not ask 1MDB then deputy chief financial officer Terence Geh (now known as Low’s associate) for details such as statements of account, explaining that he had the impression that he was “not supposed to scrutinise” the account as Low had tasked Terence with handling the account and funds within.

Saying that he did not recall Low expressly asking him not to look into the accounts, Mohd Hazem agreed he had relied on Terence as Low said the former would take care of the funds, also agreeing that he did not take any active steps to protect the company.

As for a January 27, 2014 1MDB board meeting --- the next one after the December 9, 2013 meet, Mohd Hazem had in that meeting informed the board that there was no development in the proposed Aabar-1MDB joint venture Admic, while then 1MDB director Datuk Shahrol Azral Ibrahim Halmi had in the meeting pointed out that this was outstanding since March 2013.

While the minutes of the January 27, 2014 meeting recorded Mohd Hazem as having had a discussion with the Aabar CEO on the Tun Razak Exchange project, Mohd Hazem today said he could not recall if he asked Aabar about when it would put in its US$3 billion portion into the Admic joint venture company, but also said Low did not instruct him against raising the issue with Aabar’s CEO.

Wan Aizuddin tried to suggest that it was Mohd Hazem’s own inaction that led to the failure to raise the US$3 billion matter or the Admic joint venture with Aabar’s CEO, but Mohd Hazem said there was nothing he can do if he were to “actively pursue” Aabar if the latter did not want to take part and raise funds for their own US$3 billion share.

“I did not pursue them actively because I know they are not serious about it,” he said.

The prosecution had on the first day of Najib’s trial said it would show that 1MDB GIL had on March 19, 2013 only received US$2.721 billion of the US$3 billion funds it raised with the balance paid to arranger Goldman Sachs as fees, and that over US$1 billion of the US$2.721 billion was paid to the two funds Devonshire Funds Ltd and Enterprise Emerging Markets Fund (EEMF) on March 20 and March 21, 2013.

The prosecution had also said it would show that a total of US$890 million — including a US$430 million sum passing through Granton Property Holding under Low Taek Jho’s associate Eric Tan’s control — made its way within days from Devonshire and EEMF to Eric Tan-controlled Tanore Finance Corporation, and that it would also showed that Tanore had by early April 2013 transferred US$681 or over RM2 billion to Najib’s account.