Johor polls: So what does the sleepy town of Renggam want? PKR’s Mazlee had the answer in 2018... but now?

A general view of Renggam town in Johor March 8, 2022. — Picture by Radzi Razak
Follow us on Instagram, subscribe to our Telegram channel and browser alerts for the latest news you need to know.
By RADZI RAZAK

But there were also small towns which were left out, bypassed by the highways, despite their prominence in the past.

Among the many small towns in Johor is the sleepy enclave of Renggam, once a bustling centre in Kluang.

Renggam is situated almost right in the middle of the state — about 90 kilometres to the north of Johor Baru, south-east of Batu Pahat, west of Mersing, and to the south of Segamat.

It has major rubber estates such as Guthrie and Ulu Remis — now both owned by Sime Darby.

Its big claim to fame? Queen Elizabeth II visited the town in the 1950s.

The small town comprises three rows of shophouses built between the 1930s and 1970s, and another row of shophouses just across the riverfront.

“People would not believe it used to be a really bustling town, before it was turned into a ghost town,” local man M. Suhaimi Yahya told Malay Mail.

The jovial man in his 50s smiled saying that he left in 1990 to become a soldier and when he retired in 2015, he returned but was sad to see his beloved town had become so deserted.

“There was a rubber factory and palm oil factory, so many people were here but then the job opportunities vanished. When these were closed down, many youngsters then left to work in Skudai, Johor Baru and elsewhere.

“The market used to be held in the morning and at night. Nowadays it is only held weekly for two hours, no one wants to sell and buy stuff,” he said.

Then in 2018, a change took place which coincided with Pakatan Harapan’s upset win in the general election. Former lecturer Maszlee Malik won the Simpang Renggam Parliamentary seat, which consisted of the Layang-Layang state seat which Renggam town is a part of. The then Simpang Renggam District Council (MDSR) had in 2018 underwent a rejuvenation exercise for the small town, rebranding it Bandar Mesra Belia (youth friendly town).

Suhaimi, who is known as Boyerz in the town, said his spirits lifted when the transformation took place.

“Of course YB Maszlee was here, he had also taken an interest in the transformation and rejuvenation of this town,” he added.

Another local man who only wanted to be known as Chong who was visiting his elderly father nearby said the same thing, adding that his father used to tell him how different it was in the old days before the town declined in the late 1980s.

“Renggam town has a train station and the bus stop used to be full of buses and taxis where people from Kluang, Batu Pahat and everywhere else would converge and come to work.

“If only it could change again,” he said, saying his family used to own a furniture shop in the town centre but moved it further to Layang-Layang town about 10 kilometres away.

“The idea was to turn Renggam into a bustling town full of youthful energy. When PH was the government, we had approved the work on universities, polytechnics, colleges and education infrastructure around the area.

“However it was all stopped after the government changed hands after the Sheraton move,” Maszlee told Malay Mail.

The rejuvenation of Renggam saw old shoplots being repaired and painted, with roads along the main paths changed into special bricks, a brand new mini stadium, bus depot and several spots around the town centre where people could sit and relax. 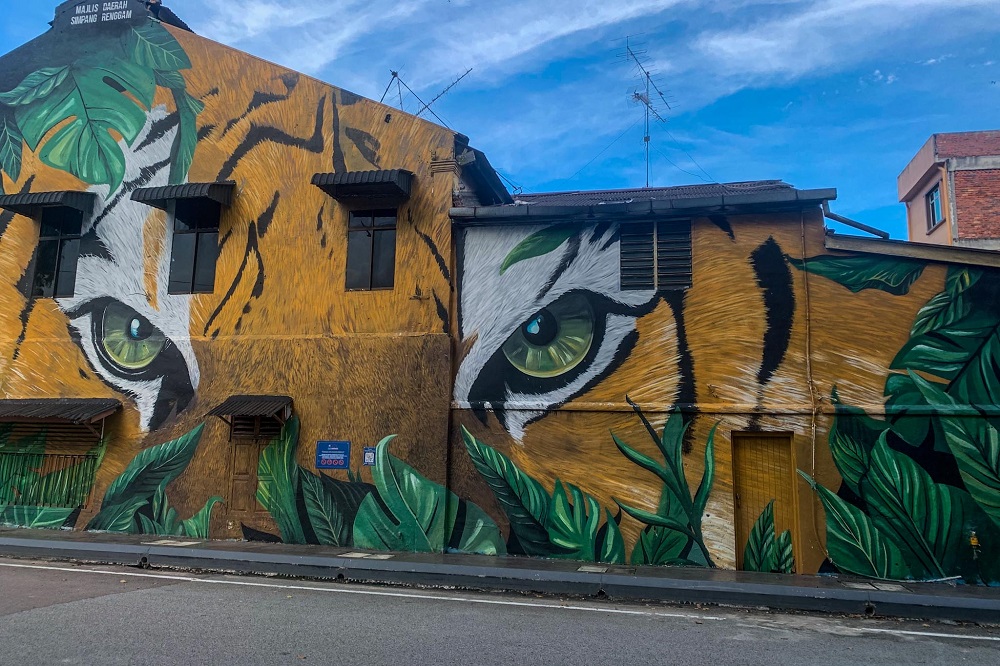 A general view of Renggam town in Johor March 8, 2022. — Picture by Radzi Razak

On two of the shoplots' walls facing the road from Simpang Renggam is a big mural depicting a Malayan tiger, eyes glaring.

Another local who introduced himself as Muthusamy said the town needed politicians who can bring about change to the town, not just cosmetically but rather ensuring that people can do business.

“I think there are no strong parties here. Barisan (Nasional), Pakatan (Harapan), Perikatan (Nasional) all have the same support. But we want someone who can change the place,” he said, gesturing at the flags which adorned the town centre as part of the election campaign.

A giant poster featuring former prime minister Tan Sri Muhyiddin Yassin swayed in the strong wind next to the river, prompting Muhtusamy to say, “We don’t need leaders who left us after they won.”

In 2018, the Layang-Layang state seat was won by Datuk Onn Hafiz Ghazi from Barisan Nasional with only a 342 majority.

It was tipped that Onn and Maszlee would square off this time around but the former was moved to Machap, another seat in the Simpang Renggam constituency which includes Felda Ayer Itam, a strong vote bank for Umno.

Abdul Mutalib was the Layang-Layang state assemblyman for one term before being replaced by Onn.

Maszlee had also promised that he would continue to oversee the transformation of Renggam as part of his work both at the federal or state level.

“I believe I can do more to help Renggam and all the Layang-Layang people. More can be done for the people and I intend to ensure we help every single person here,” he said.