Search and rescue personnel are pictured at the site of a landslide at Taman Bukit Permai 2 Ampang, March 10, 2022. — Picture by Firdaus Latif
Follow us on Instagram, subscribe to our Telegram channel and browser alerts for the latest news you need to know.

KUALA LUMPUR, March 10 — Police confirmed that an elderly woman, who was the second victim found in the landslide incident at Taman Bukit Permai, Ampang here has died.

Ampang Jaya District Police chief ACP Mohamad Farouk Eshak said the body of the woman, who was in her 80s, was brought out at 9.15pm.

He said her body was found in her house and had been taken to the Ampang Hospital for post-mortem, adding that she is believed to be the wife of the first victim who was rescued earlier.

“So far three more men are believed to be still buried in the rubble, including an employee of Pengurusan Air Selangor Sdn Bhd. 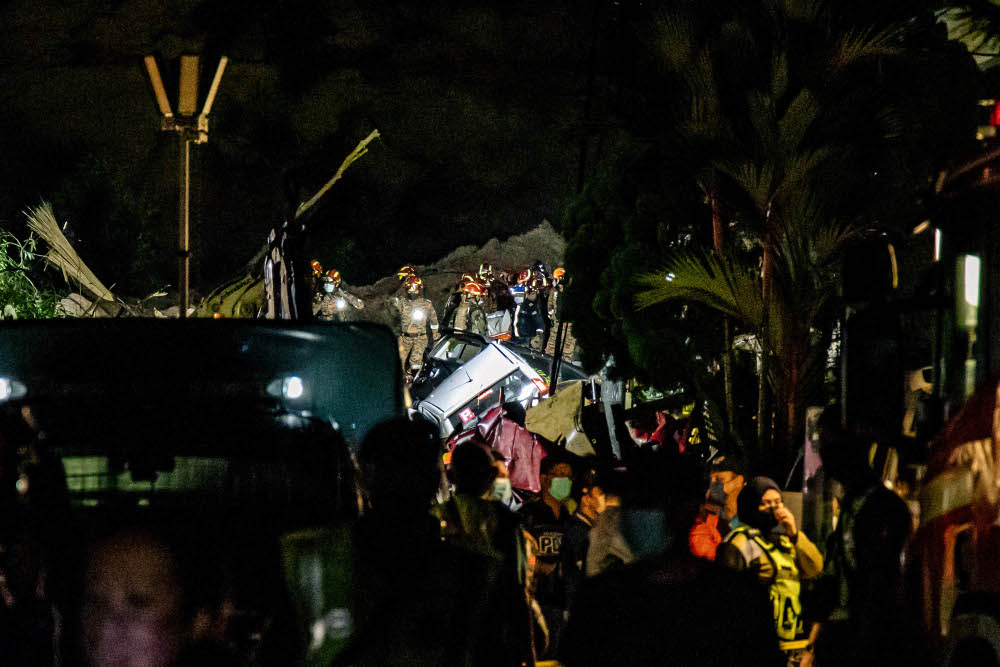 Search and rescue personnel lift one of the bodies recovered from the landslide at Taman Bukit Permai 2 Ampang, March 10, 2022. — Picture by Firdaus Latif

“Apart from that, all the residents from the area have been placed at the temporary relief centre in Taman Mega Jaya here as a precautionary measure,” he told reporters at the site of the incident.

“They (the residents) can opt to stay at the centre, hotel or the homes of their other family members.

Mohamad Farouk said that, so far, 15 houses were affected and only two were buried in the landslide.

“So far, we cannot ascertain whether this area is actually safe or not. (Land) assessment work is being carried out by the Public Works Department,” he said.

He added that the search and rescue operation for two more victims would continue tonight after the body of the third victim was found at about 11pm today.

“The department, together with the district office, will monitor soil movement if there is anymore landslides, but it depends on the weather,” he said. — Bernama

Search and rescue personnel are pictured at the site of a landslide at Taman Bukit Permai 2 Ampang, March 10, 2022. — Picture by Firdaus Latif

Domestic Trade Ministry: Shortage of chicken eggs in some areas only temporary

Domestic Trade Ministry: Shortage of chicken eggs in some areas only temporary