A dose of the Pfizer-BioTech Covid-19 vaccine is pictured at the UiTM Hospital in Sungai Buloh March 2, 2021. ― Picture by Hari Anggara.
Follow us on Instagram, subscribe to our Telegram channel and browser alerts for the latest news you need to know.
By SHAHRIN AIZAT NOORSHAHRIZAM

KUALA LUMPUR, Feb 17 — A survey covering South-east Asia found that Covid-19 vaccines from American firms Pfizer and Moderna emerged as Malaysia's most preferred brands after gaining 48 per cent of votes from respondents.

The report released yesterday by the Singapore-based Asean Studies Centre at ISEAS-Yusof Ishak Institute also said that despite Malaysians admitting that China has been the main Covid-19 vaccine donor to the region, it does not reflect the popularity of the brand offered by Beijing among the country’s population.

“For example, though more than two-thirds of respondents in Indonesia (68.7 per cent) and Malaysia (64.4 per cent) identify China as the country that has provided the most vaccine support to the region, only 35.1 per cent in Indonesia and 23.7 per cent in Malaysia prefer Chinese vaccines over others.

“A possible reason could be concerns about the efficacy of Chinese vaccines, especially compared to the newer mRNA vaccines,” it said in the report.

Coming right behind Pfizer and Moderna is the Chinese-made Sinopharm or Sinovac, garnering 12.6 per cent votes among Malaysian respondents, slightly above the UK-manufactured AstraZeneca at 11.9 per cent.

The survey showed that the rest of the population preferred Indian-manufactured brands either Covishield or Covaxin (3 per cent) and domestically produced vaccine brands like Nanocovax at 0.7 per cent. Meanwhile, none of the respondents voted for Russian-manufactured Sputnik V. 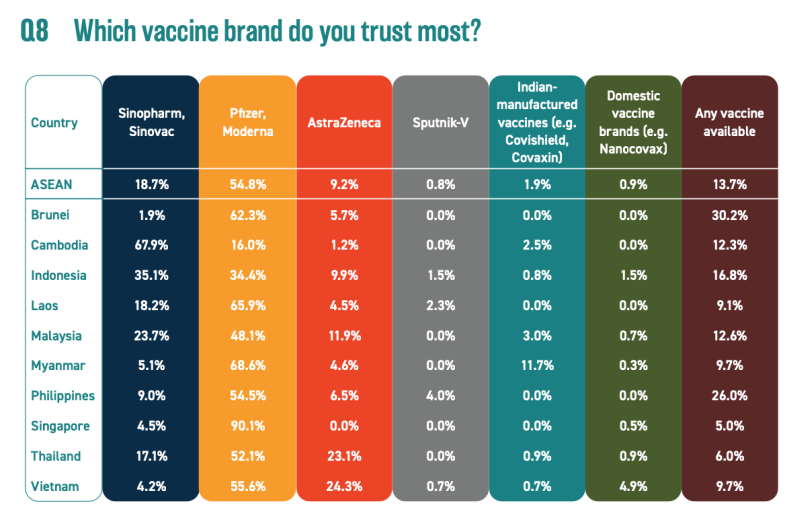 Reflecting recognition for Chinese support in the supply of Covid-19 vaccines to the region, the report showed that Cambodians preferred Sinopharm or Sinovac, with 67.9 per cent voting it as the most trusted brand among respondents there

Regionally, Pfizer and Moderna together gained the most trust from more than half of the Asean population (54.8 per cent) compared to Sinopharm or Sinovac at 18.7 per cent.

Intriguingly, the report showed that 13.9 per cent of the Asean population opted for “any vaccine available” — significantly higher than the vote share of specific brands of AstraZeneca (9.2 per cent), Indian-manufactured vaccines (1.9 per cent), domestic vaccines (0.9 per cent) and Sputnik V (0.8 per cent).

The survey conducted between November 11 and December 31, 2021 involved 1,677 respondents, with 8.1 per cent of them from Malaysia. Most of the respondents were academics, from think tanks, or research institutions.