Datuk Seri Najib Razak is pictured at Kuala Lumpur High court November 11, 2021. — Picture by Ahmad Zamzahuri
Follow us on Instagram, subscribe to our Telegram channel and browser alerts for the latest news you need to know.
By IDA LIM

Wan Aizuddin Wan Mohammed, one of the many lawyers representing Najib confirmed that the filing was made yesterday.

“It has been filed. Yesterday afternoon,” he told Malay Mail when contacted.

Wan Aizuddin confirmed that the apex court has given any date for case management yet in relation to this appeal.

Farhan Read, another lawyer representing Najib, similarly confirmed to Malay Mail that the appeal was filed at the Federal Court yesterday afternoon.

Yesterday, Najib failed in his appeal at the Court of Appeal, where he was seeking to overturn the High Court’s July 28, 2020 decision which found him guilty of all seven charges relating to SRC’s RM42 million.

The High Court previously sentenced Najib to 10 years’ jail for each of six charges (three counts each of criminal breach of trust and money laundering), as well as 12 years’ jail and a RM210 million fine with an additional five years’ jail if the fine is not paid for the abuse of position charge.

The High Court had ruled that Najib’s prison sentences would run concurrently or at the same time, which would mean a maximum imprisonment of 12 years for Najib.

Yesterday, a three-judge panel at the Court of Appeal ruled that the High Court did not make any errors in its decision, and upheld the conviction, RM210 million fine and the jail sentence on Najib.

Among other things, the Court of Appeal had noted that there was a clear money trail showing the government-owned company SRC’s RM42 million as having flowed through other accounts to disguise the money flow and layer the transactions before finally reaching Najib’s personal bank accounts.

The Court of Appeal had also said Najib knew or had reason to believe or had reasonable suspicion that the RM42 million that entered his bank accounts were proceeds from unlawful activities and that he had used these funds for his personal benefit, while also dismissing Najib’s claim that these funds were a purported donation from Saudi Arabia’s royal family.

The Court of Appeal yesterday allowed Najib’s lawyers’ application for a stay to be granted on the execution of the fine and jail sentence while waiting for the Federal Court to hear and decide on Najib’s appeal, and maintained the previous conditions of RM2 million and for Najib to report to a police station of his choice twice every month.

This means that Najib would not have to pay the fine or serve the jail sentence, while pending the Federal Court’s hearing of his appeal against the conviction and sentence. 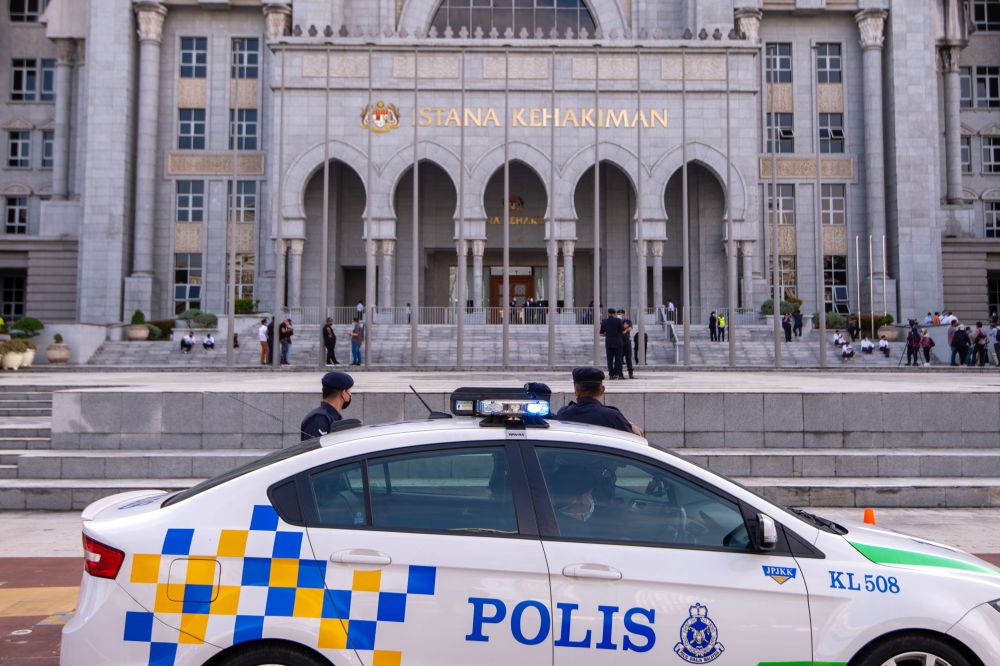 Police personnel are seen at the Palace of Justice in Putrajaya December 8, 2021. ― Picture by Shafwan Zaidon

In an online press conference yesterday shortly after noon, Najib expressed his disappointment and said he had asked his lawyers to file an immediate appeal to the Federal Court, while also seeking to “put into proper perspective” the Court of Appeal’s use of the words “national embarrassment” to describe his conduct in the SRC case

Lawyers have explained that Najib has not been removed as Pekan MP yet as he has the right to exhaust all legal options.

However, they said that Najib will not qualify to defend his seat or be fielded as a candidate if fresh elections were called now while his appeal is pending at the Federal Court.

The lawyers also said Najib would lose his Pekan parliamentary seat if the Federal Court decides against his appeal and if any bid for a royal pardon is rejected.