KUALA LUMPUR, May 29 — A record of 98 people have died of Covid-19 in the past 24 hours, representing a 55 per cent jump from the previous maximum, according to the Health Ministry.

An infographic the ministry posted on Twitter also showed the cumulative death count now stands at 2,650, which includes today’s figures.

The consistent increase in daily fatalities has brought the May count to 1,141 deaths already with two more days to go in the month, according to Malay Mail’s calculations.

With today’s numbers, more people have died of Covid-19 in this month alone than the total from January 1 until April 30.

There have also already been 402 deaths since Monday this week.

The youngest deceased reported today was a 27-year old local man in Johor who had diabetes and kidney disease.

The age of the oldest death was of a 91-year-old local woman with diabetes, hypertension and cardiac disease who died in Sunway Hospital.

Selangor reported the most deaths with 27, followed by Kuala Lumpur and Johor with 14 deaths each, Negri Sembilan and Kedah with eight deaths each, Sarawak and Penang with five each, Sabah and Terengganu with four, three deaths in Pahang, two each in Kelantan and Melaka, and one death in Labuan.

A total of 15 of those who died over the last day, according to MOH, did not suffer from any underlying comorbidity, their ages ranging from 37 to 89 years old.

Over the last day, 36 more patients were admitted to intensive care units (ICU) in hospitals across the country, pushing Malaysia’s record in this area higher still to 844.

Of this number, 430 of them required ventilators. 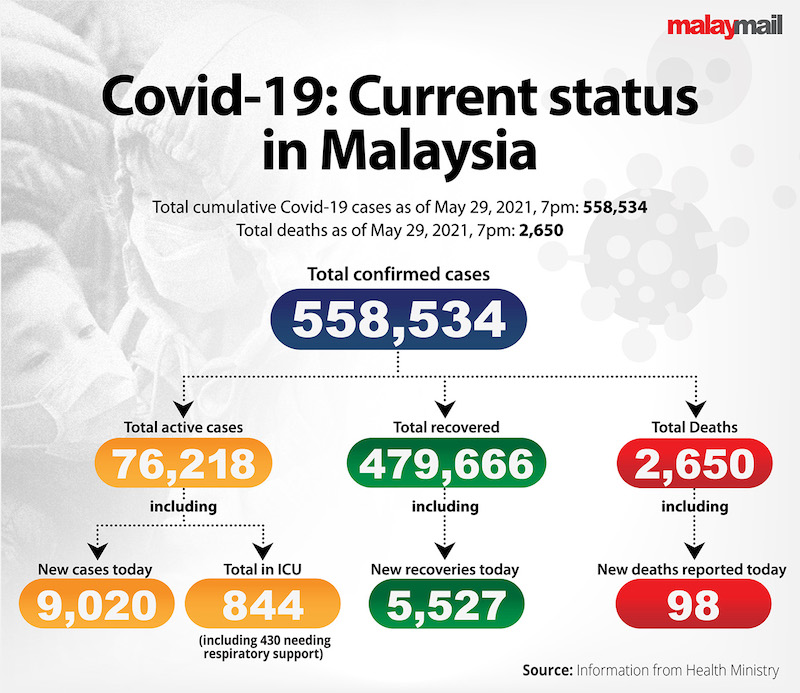