Petition for Tajuddin’s resignation gets 100,000 signatures in less than 24 hours

Prasarana chairman Datuk Seri Tajuddin Abdul Rahman addresses members of the media during a press conference in Kuala Lumpur May 25, 2021.
Follow us on Instagram, subscribe to our Telegram channel and browser alerts for the latest news you need to know.
By IDA LIM

KUALA LUMPUR, May 26 — More than 100,000 individuals have signed an online petition to demand for Pasir Salak MP Datuk Seri Tajuddin Abdul Rahman to step down as chairman of public transport firm Prasarana, in just less than 24 hours since the petition was created.

The online petition on the website Change.org is titled “#LetakJawatanTajuddin”, a phrase which means “Step Down, Tajuddin” in English.

In the petition listed as having started around 7pm yesterday, it had garnered 100,000 signatures shortly after 4pm today or about 21 hours later, and had as of 5pm garnered more than 107,200 signatures.

The petition claimed that Tajuddin’s alleged failure and lack of sensitivity and empathy in managing the victims of the LRT tragedy on the night of May 24 involving two colliding trains had shown that he was allegedly “not qualified to hold the position as Prasarana chairman”.

The petition also said that Tajuddin’s alleged arrogance was seen during a press conference that he had after his visit on May 25 to the scene of the incident, and also described him as having allegedly made a “racist remark” against a reporter from China news agency Phoenix TV after she asked him a question during the press conference.

The petition also said Tajuddin breached Covid-19 standard operating procedures by wearing a face shield only without wearing the mandatory face mask, adding that the police and the Health Ministry has to take firm action against him.

“Therefore, we demand for Tajuddin Abdul Rahman, Pasir Salak MP to immediately resign as Prasarana chairman. The Ministry of Finance also has to act by firing Tajuddin if he is still stubborn in letting go of the highest position of that MOF subsidiary,” the petition which was addressed to Tajuddin, Prasarana and the Finance Ministry said. 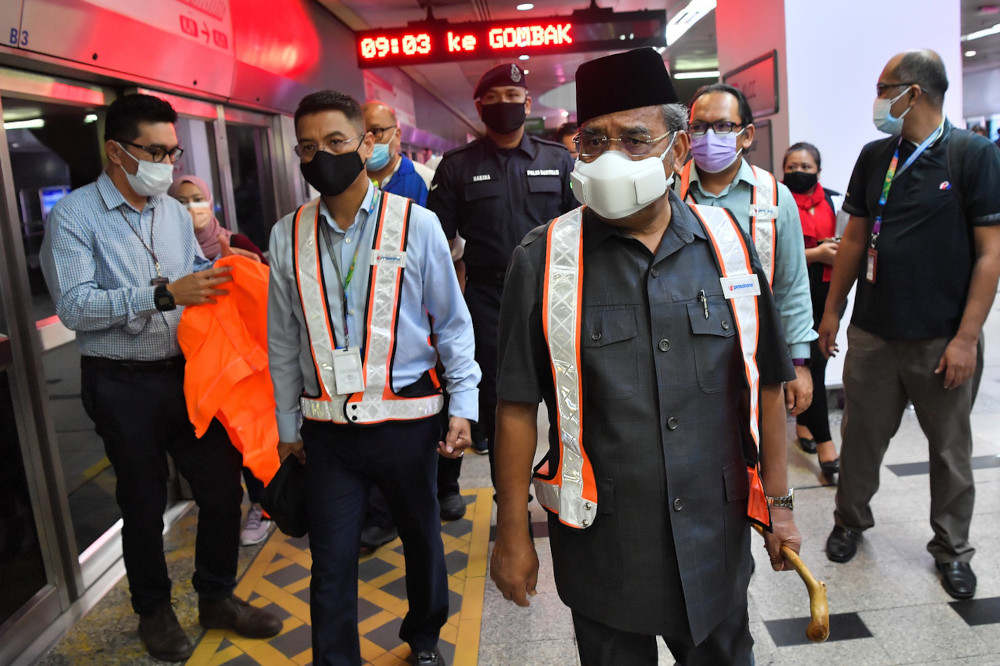 The petition claimed that Datuk Seri Tajuddin Abdul Rahman’s alleged failure and lack of sensitivity and empathy in managing the victims of the LRT tragedy on the night of May 24 involving two colliding trains had shown that he was allegedly ‘not qualified to hold the position as Prasarana chairman’. — Bernama pic

This petition was started by “Hentikan Double Standard”, the same Change.org user that had started a petition about a week ago to demand for the police to imprison local celebrity Noor Neelofa Mohd Noor over her breaches of Covid-19 standard operating procedures such as interstate travel for non-essential purposes and a Hari Raya gathering.

The petition for action on Neelofa has as of 5pm today garnered more than 75,970 signatures.

Earlier today, Dang Wangi district police chief ACP Mohamad Zainal Abdullah said that the police had launched investigations yesterday on a viral video on social media which showed Tajuddin as failing to wear a face mask during his press conference after visiting the scene of the LRT train accident at the KLCC LRT station in Kuala Lumpur.

He said the Dang Wangi police will call in all who are involved in this case to provide their statement in the near future, and that the investigation papers would be submitted to the Attorney General’s Chambers once investigations are complete.

Today, Tajuddin was reported by news portal FreeMalaysiaToday as claiming that he was told that wearing a face shield was “good enough” and said he had decided it would be better to wear this during a press conference instead of a face mask to enable the reporters to hear better.

Former prime minister Datuk Seri Najib Razak, who is also from Tajuddin’s party Umno, today said he had advised the latter on various matters, including to apologise for how he handled the press conference.