‘This is not like buying T-shirts on Shopee’: Khairy says Covid-19 vaccine donation offer to Penang state govt ‘bogus’

NCIP Coordinating Minister Khairy Jamaludin said that checks made with Sinovac showed there is no evidence to show that the company — Xintai Development Enterprise — had approached them to purchase the vaccines for Penang state. — Reuters pic
Follow us on Instagram, subscribe to our Telegram channel and browser alerts for the latest news you need to know.
By ASHMAN ADAM

KUALA LUMPUR, May 19 — Minister of Science, Technology and Innovation Khairy Jamaludin today said that the donation of two million doses of Covid-19 Sinovac vaccines from a private company offered to the Penang state is bogus and untrue.

In a press conference, the National Covid-19 Immunisation Programme (NCIP) coordinating minister said that checks made with Sinovac showed there is no evidence to show that the company — Xintai Development Enterprise — had approached them to purchase the vaccines for Penang state.

“I’ve reached out to Ms Coco Chang, Head of International Sales at Sinovac Biotech on this donation and she has informed me that she has had zero dealings with the company or the person the letter was addressed to — Yong Chee Kong,” he said.

“The offer is bogus. It is completely untrue. We checked with Sinovac and they have no dealings with the company, we checked with company records in Hong Kong, and the company does not exist. No one even knows who Yong Chee Kong is.”

He also said the Penang state government should not have politicised the matter by accusing the federal government of blocking its attempt to procure Covid-19 vaccines.

“How can the Penang state government use a scam letter to accuse the federal government of blocking a vaccine donation? This company does not exist.

“This isn’t buying a T-shirt from Shopee. This is a vaccine, a highly-regulated product. This letter is bogus,” he added, referring to the online shopping platform. 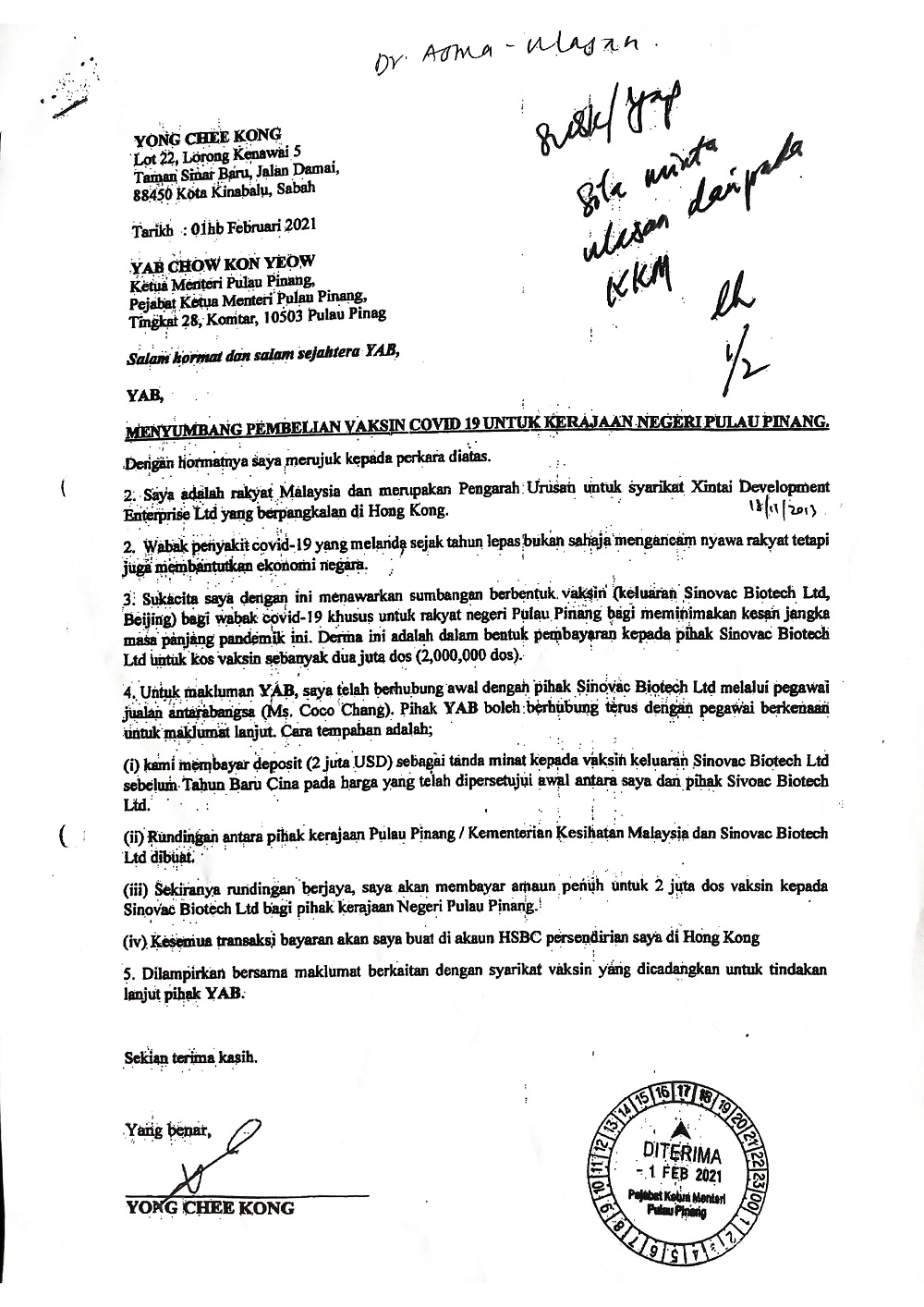 Khairy added that his team had received a similar letter from the same person on February 9, but subsequent checks showed that the offer contained within was bogus, adding that he has instructed the Covid-19 Immunisation Task Force (CITF) to file a police report on the matter.

Khairy then said that he is willing to be proven wrong by the Penang state government, saying that if they can demonstrate that the offer made by Yong Chee Kong was true, he would immediately approve and help facilitate the vaccine donation.

“I don’t want to politicise this matter, like how Guan Eng did because to me, my work is honest and important to all state governments in their plans to purchase vaccines.

“But if there are any parties who want to help Malaysia, the federal or state governments by donating vaccines to them, I encourage it.

“But it must follow the proper channels. This is a vaccine, a highly-regulated product. This isn’t buying a T-shirt on Shopee. The vaccines need to be approved by the National Pharmaceutical Regulatory Agency (NPRA) first,” he said.

He said the private company had offered to donate two million doses of Sinovac, the Covid-19 vaccine from China, back in February, adding that the state secretary had officially written to the Health Ministry secretary-general for approval to accept the donated vaccine.