Dr Mahathir: Malays’ anger against the Palace boiling up as Emergency goes on

Former prime minister Tun Dr Mahathir Mohamad arrives at Istana Negara gate 3 to give a memorandum seeking the end of the Emergency proclamation at Istana Negara, April 20, 2021. ― Picture by Hari Anggara
Follow us on Instagram, subscribe to our Telegram channel and browser alerts for the latest news you need to know.
By RADZI RAZAK

KUALA LUMPUR, Apr 20 — The Malays are starting to get angry against the country’s monarch as they have suffered since the ill-advised Emergency decreed by the Yang di-Pertuan Agong earlier this year, Tun Dr Mahathir Mohamad suggested today.

The former prime minister said the current “dissent” towards members of the royal family on social media is also caused by the public’s lack of knowledge about the part Prime Minister Tan Sri Muhyiddin Yassin played advising the Agong, leading to the proclamation.

“That is why people now are not as before because they are uneasy with the current situation.

“The Malays rarely show their dissent to the King,” he told reporters after handing in a memorandum seeking the end of the Emergency proclamation at Istana Negara here.

“But now we have to notify the Palace’s private secretary that the people are starting to get angry towards His Majesty. We can see it in the social media,” he added. 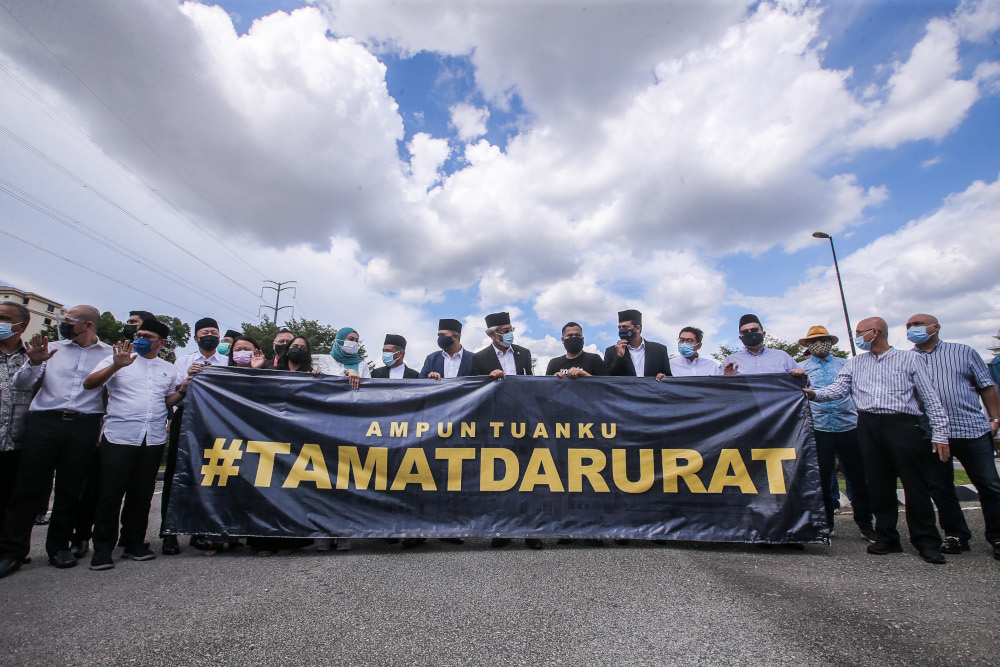 Opposition leaders hold a banner in front of Istana Negara asking for an end to the Emergency, April 20, 2021. ― Picture by Hari Anggara

Discontent against the royal family has simmered on social media this week, following a report claiming that the Agong and his family had received unapproved Covid-19 vaccines during his visit to the United Arab Emirates, and procured 2,000 more doses for their family and friends.

The report has been dismissed by Health Minister Datuk Seri Dr Adham Baba.

However when asked about the Asia Sentinel report that made the allegation, Dr Mahathir declined to comment.

“It was an allegation. I did not hear from others so I will not comment on that,” he said.

The Langkawi MP had joined members from the Committee for Ending the Emergency Declaration around 3.15pm today to seek an audience with the Yang di-Pertuan Agong.

Dr Mahathir also sarcastically said that it is hard to seek an audience with the Agong these days.

“Before, even when I was not prime minister, I came by the front door [of the Palace], but now I have to come by the back door,” he told reporters.

In January this year, Al-Sultan Abdullah Ri’ayatuddin Al-Mustafa Billah Shah consented to a state of Emergency in the country until August 1, or until the current wave of Covid-19 subsides. There is still no word as to when it will end.