KUALA LUMPUR, Jan 17 — Despite the ban on travelling across state and district borders in effect under the movement control order (MCO), many people are still adamant on doing so when the number of individuals arrested for the offence rose to 66 yesterday compared to 32 two days before.

On the fifth day of MCO, the violation was among the highest infringement of MCO standard operating procedure (SOP) reported after 200 people were nabbed for not wearing face mask followed by failure to provide facilities to record customer details (147).

“Apart from that, the individuals arrested for flouting the order were for physical distancing (46), premises operating beyond permitted hours (42), entertainment centre activities (11) and others (96),” he said in statement today.

The government announced the prohibition on interstate and inter-district travel nationwide on Wednesday during the implementation of MCO, conditional MCO (CMCO), recovery MCO (RMCO) according to states until January 26.

Ismail Sabri also announced that under Op Benteng, 17 illegal immigrants and two skippers were apprehended while seven vehicles were seized yesterday, apart from 415 roadblocks (SJR) mounted throughout the country.

Meanwhile, he said 105,849 individuals returned home via international checkpoints and from the total, 8,541 were undergoing mandatory quarantine while 540 were sent to hospitals for treatment.

On essential items, he said the Domestic Trade and Consumer Affairs Ministry (KPDNHEP) had conducted 811 inspections on the supply of 11 types of goods yesterday.

On the whole, he said the supply of essential goods is sufficient and can accommodate domestic demand.

“KPDNHEP enforcement officers also carried out 1,166 special inspections on compliance to RMCO SOP. From the total, 1,161 premises were found adhering to the stipulated SOP while five premises were given warnings for not complying with the SOP,” he said. — Bernama 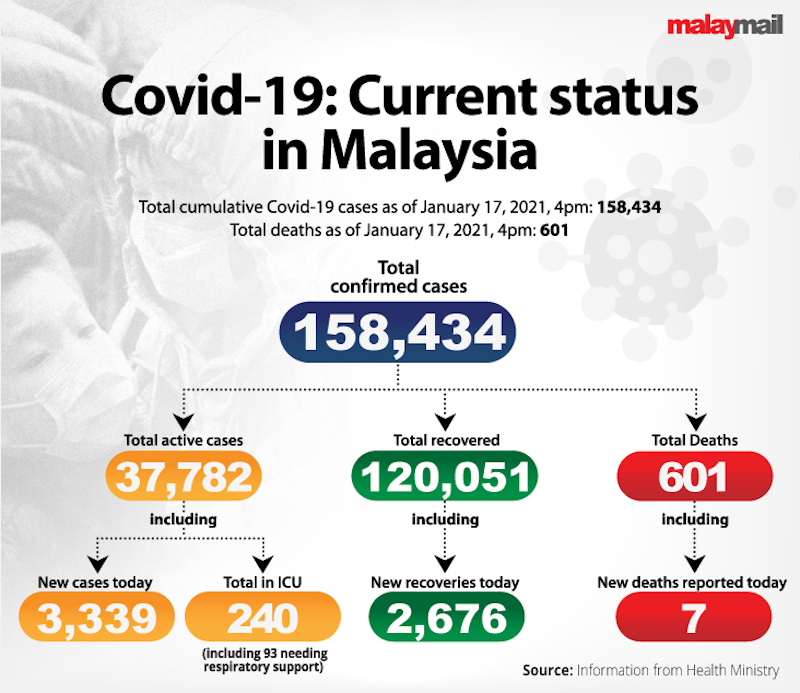