Health director-general Tan Sri Dr Noor Hisham Abdullah speaks during a press conference in Putrajaya on November 21, 2020. — Picture by Miera Zulyana
Follow us on Instagram, subscribe to our Telegram channel and browser alerts for the latest news you need to know.
By EMMANUEL SANTA MARIA CHIN

However, the World Health Organisation states that the cumulative cases in China is at a much higher number of 95,279, as it includes the number of cases in Hong Kong, Taiwan and Macau.

A bulk of the new cases were reported in Selangor with 481 cases, Sabah with 268 new infections, and Kuala Lumpur with 232 new cases, with 10 imported cases from returning travellers.

The rest of the states in order of new cases reported are Johor with 105, Penang with 69, Negri Sembilan with 60, 35 cases in Perak, 14 in Melaka, 13 in Pahang, Kedah with nine new cases, Putrajaya with four, three in Labuan and one each in Kelantan and Terengganu.

From today’s deaths, five were reported in Sabah and one each in Kelantan and Kuala Lumpur.

The 423rd death was of a 66-year-old man admitted in Hospital Sungai Buloh with a background of diabetes, hypertension, chronic kidney disease and cataract.

The 424th and 425th deaths were of 52-year-old women, one admitted in Lahad Datu Hospital and the other in Raja Perempuan Zainab II Hospital in Kota Baru with both patients having a history of diabetes and hypertension, while the latter also suffered from dyslipidaemia.

All the four remaining deaths were reported in Sabah, three in Tawau Hospital and one in Lahad Datu Hospital. The men were aged 77, 58, 76, and 57 respectively, where both the men in their 70s had a history of hypertension.

Three of the new clusters were detected in the city with one each in Selangor, Sabah, Johor, Perak and Pahang.

Meanwhile, 1,052 more patients were cured and released, bringing the total number of discharged patients to 72,733. 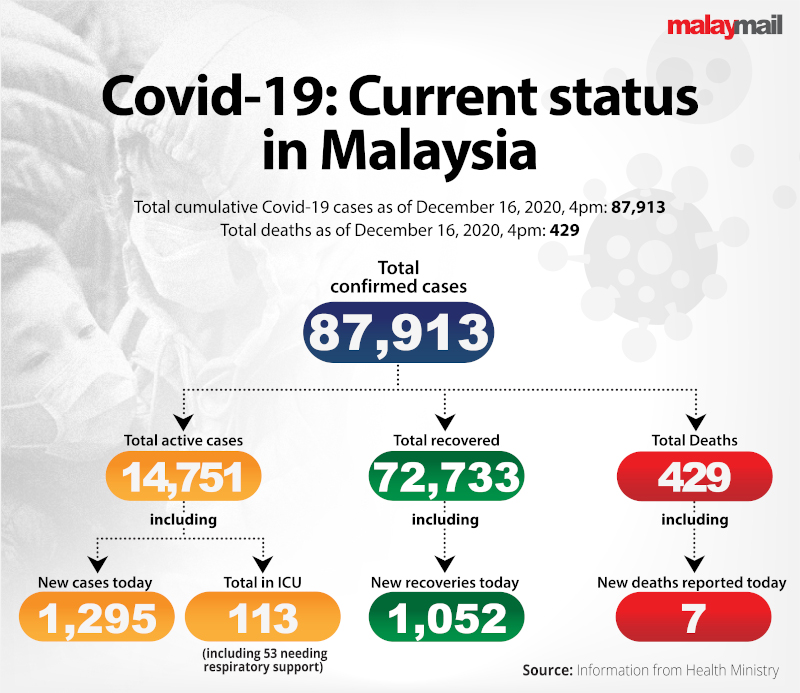