Malaysia records 11 Covid-19 deaths including in Johor, Kelantan as new cases back up to four digits at 1,075

KUALA LUMPUR, Dec 3 — The Health Ministry (MoH) recorded today 11 deaths due to Covid-19 today including two in Johor and one in Kelantan, bringing the death toll in the country to 376.

Meanwhile, 1,075 new cases were recorded today, raising the number of daily infections back to four digits, just a day after it was reduced to the hundreds.

Health director-general Tan Sri Dr Noor Hisham Abdullah made the announcement in a statement, adding that there were 948 recoveries today.

All eleven people who died today were Malaysians, 10 of them being senior citizens, aged between 64 and 81.

Only one of them did not have a record of a pre-existing condition such as diabetes or hypertension.

“A Malaysian woman, aged 50, died at the Enche’ Besar Hajjah Khalsom Hospital in Johor today. She had a history of diabetes and obesity,” wrote Dr Noor Hisham, referring to the youngest deceased.

Besides the deaths in Kelantan and Johor, there were three deaths in Selangor, two deaths in Sabah, one in Negri Sembilan, one in Kuala Lumpur and one in Putrajaya.

“MoH extends its condolences to all their family members,” said Dr Noor Hisham

Selangor recorded the highest number of cases with 459 cases, followed by Sabah with 310 cases today.

He said the total number of people who recovered from the disease is now 57,917 people, or 83.8 per cent of all those who have been infected.

“There are 116 Covid-19 patients currently warded in intensive care units (ICU), with 46 of them needing breathing assistance,” he added. 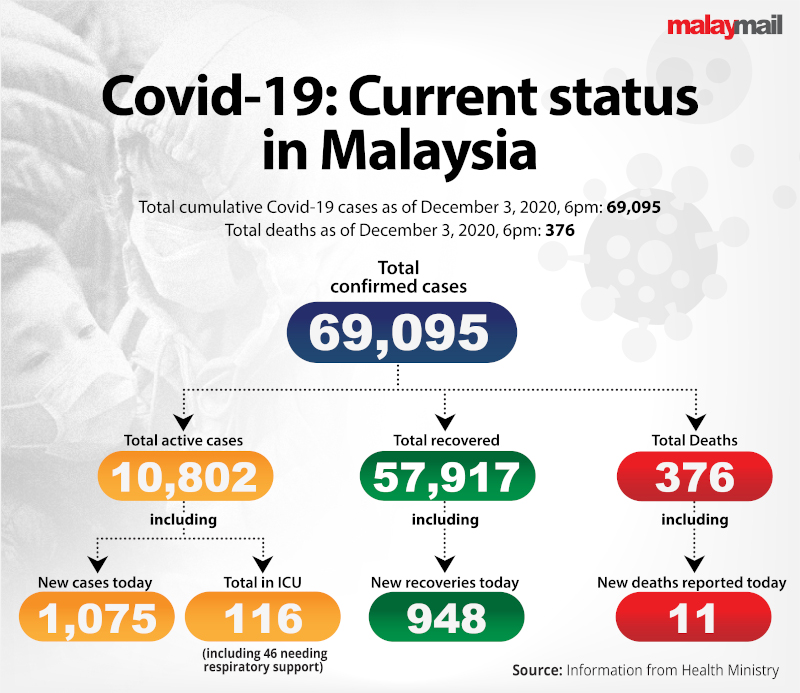